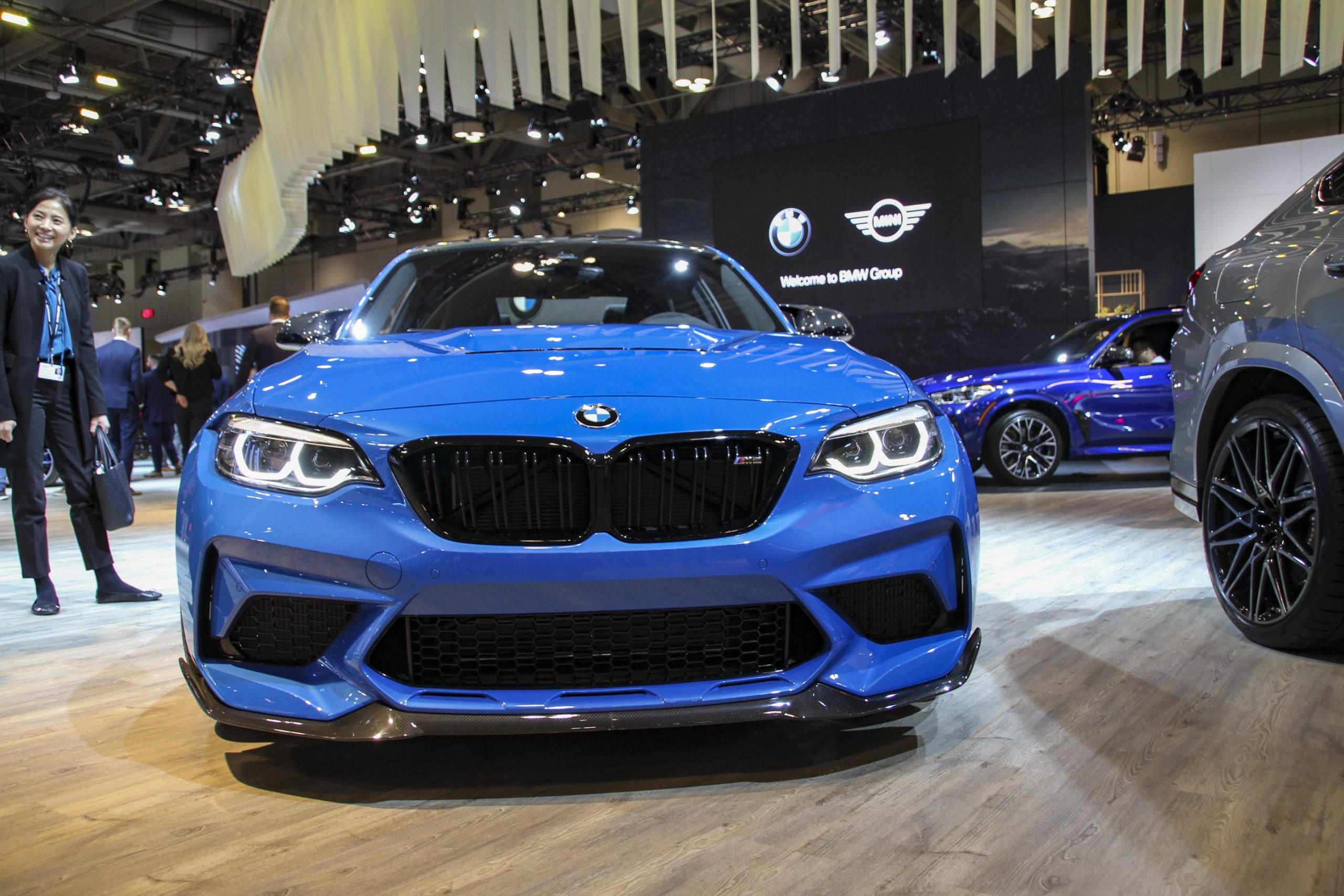 The largest consumer show in Canada is underway with the 2020 edition of the Canadian International AutoShow. It runs from February 14 through Sunday February 23 at the North and South Buildings of the Metro Toronto Convention Centre in downtown Toronto. There are more than 1,000 vehicles on display spread-out over 650,000 square feet at the vast and sprawling MTCC. Last year more than 360,000 people attended the show, which offers something for every automotive consumer.
This year, there were several TrackWorthy unveilings that caught our eye:

BMW M2 CS
This is the final iteration of the current generation of this great handling little BMW. The M2 CS has received similar upgrades found on the bigger CS or Completion Sport models, the M3 CS and M4 CS. “We have combined as many lightweight elements to the vehicle as possible to lower its weight and increase its dynamic potential” said Patrick Lalewicz, Senior Product Planner at BMW Group Canada. “As well we have increased the horsepower, up to 444, all to make it the ultimate track capable M2”. Plenty of carbon fibre upgrades can be found inside, outside and under the hood of this car. It is the first M2 to have a carbon fibre roof. The M2 CS on display is in beautiful Misano Blue (the same name as the colour on our Alfa Romeo Giulia) which is specific to the M2 CS. It is also fitted with unique lightweight wheels that have a subtle gold finish, and a louder, lighter exhaust utilizing titanium elements. The base M2 CS comes standard with, are you ready for it, a 6-speed manual transmission! For $3,900 you could go faster, but potentially have slightly less fun, and opt for the 7-speed dual clutch gearbox. And if you want the ultimate in stopping power, you could go for the $9,500 carbon ceramic brakes. The base MSRP is $97,750. Only 2,000 units will be built worldwide with about 120 coming to Canada.

Bugatti La Voiture Noire
We witnessed the unveiling of this one of a kind Bugatti, literally, only one is being built. This hypercar is hyper expensive with a price tag of $12 million USD (or $16 million Canadian). The La Voiture Noire (“The Black Car”) is touted as the most expensive new car ever offer to the public. It was sold to a ‘Bugatti enthusiast’. To propel the black car, ideally somewhere out on a German autobahn highway, is a 16 cylinder engine that produces 1,500 horsepower. “The Bugatti La Voiture Noire is one of the highest profile entrants in the hypercar sector, and one of the most beautiful and powerful cars we have ever been able to showcase,” said Jason Campbell, General Manager of the AutoShow. 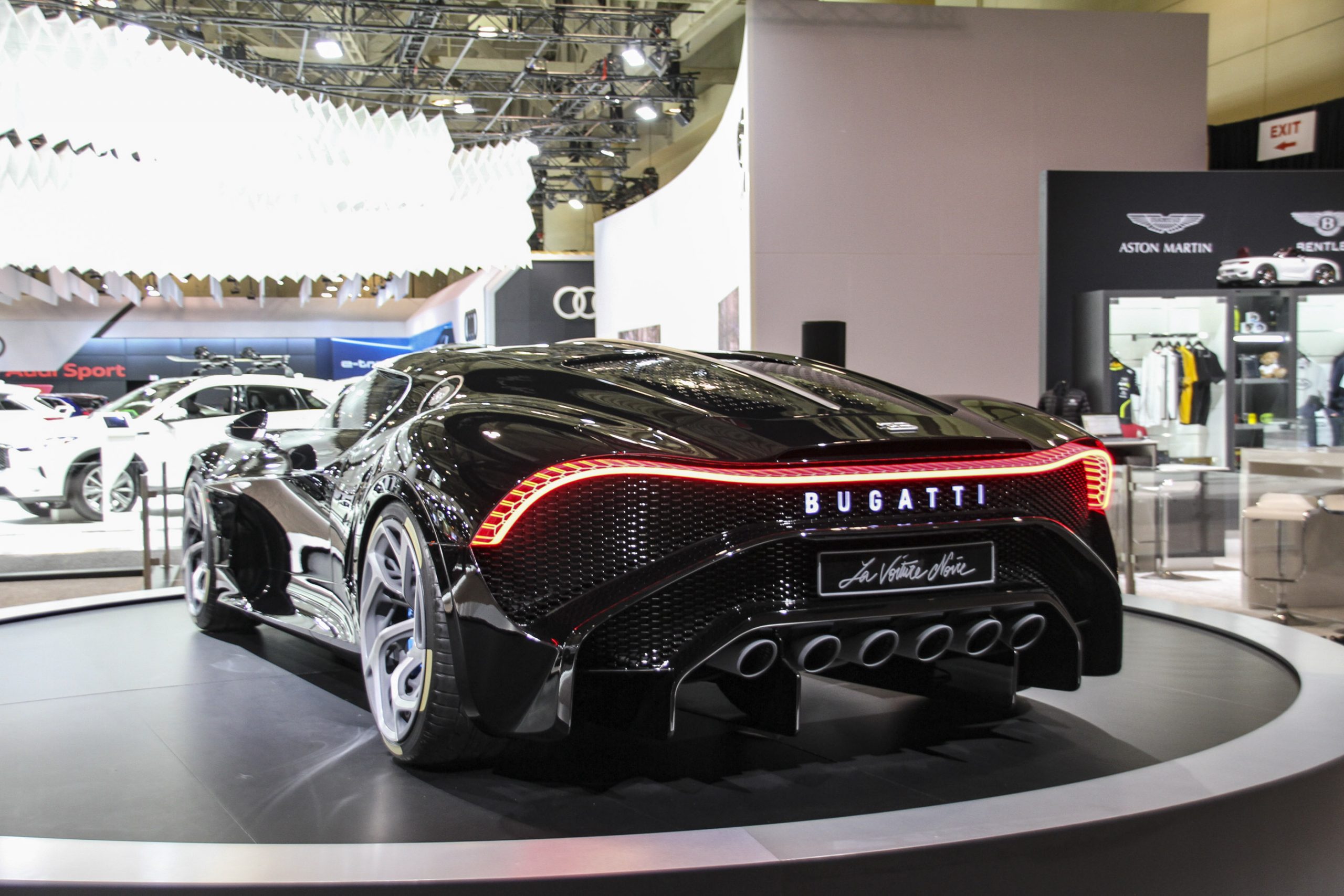 Chevrolet Corvette Stingray Convertible
The new eighth-generation (C8) Corvette Stingray is unique for many reason, the biggest being that, for the first time its 66 year history, the engine has been moved from the front, to a mid-engined configuration. The all-new racing Corvette C8.R came painstakingly close to finishing on the podium in its very first race, the 2020 Rolex 24 at Daytona last month in Florida. The leading Corvette ended up finishing a close fourth in its class. 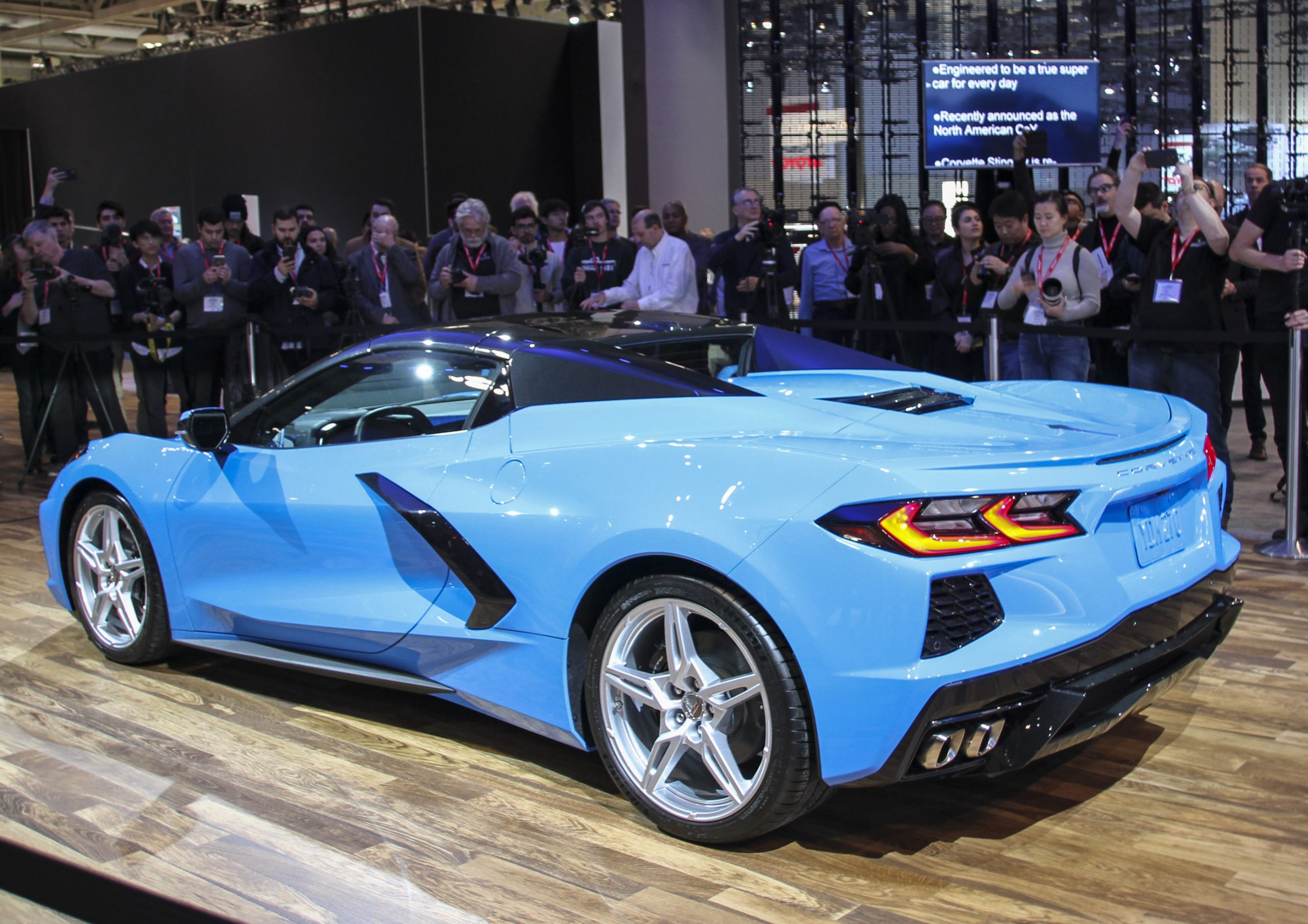 Not only is the C8 all-new for 2020, it was revealed in July 2019 in coupe form, which is really a targa because of its removable top, but we were on hand to see the reveal of the convertible. And, another first for Corvette, is its retractable hardtop. All prior generations were soft top convertibles. 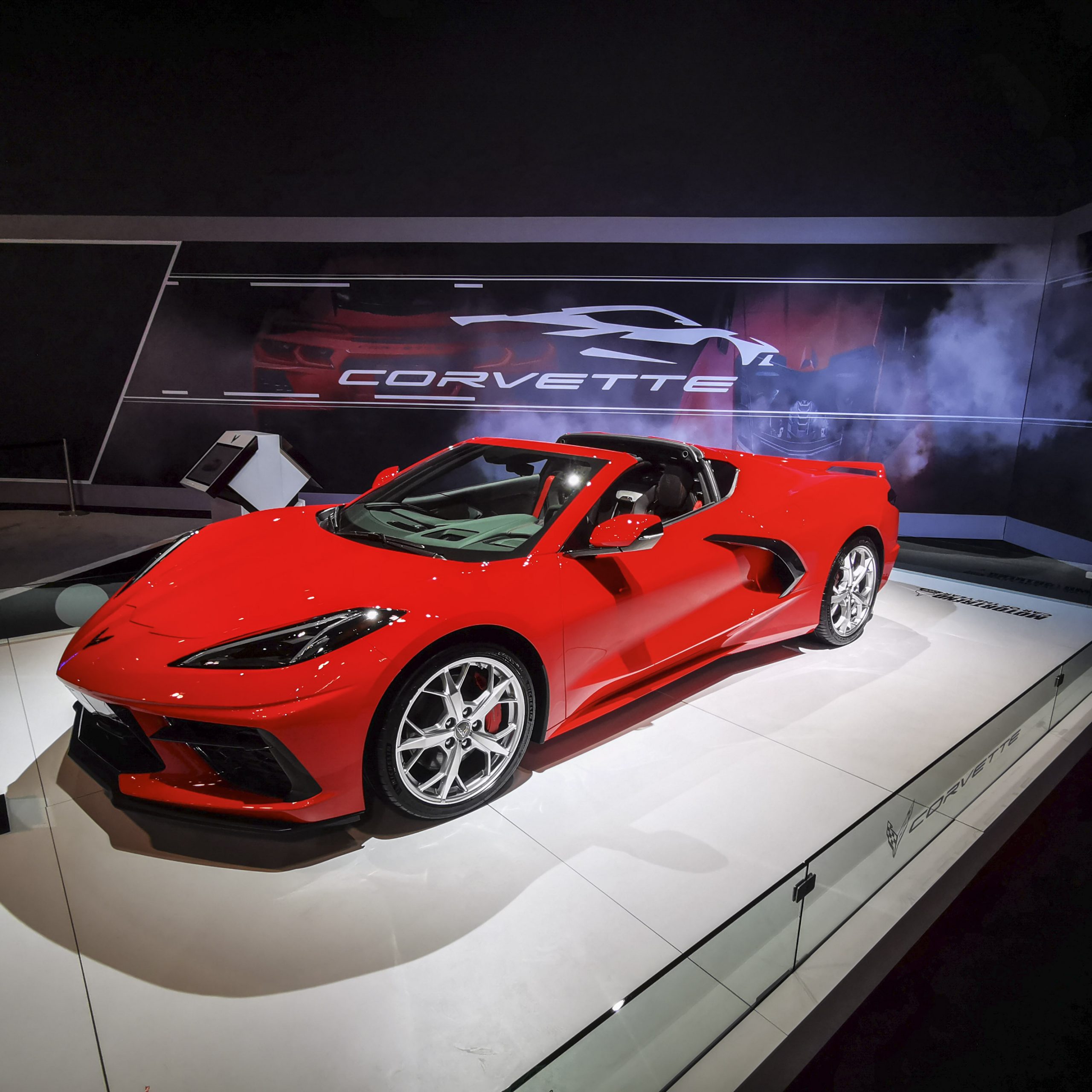 “The coupe does have the hardtop that you can remove, which does allow you to get a little bit of open air driving, but for those who want the full convertible experience, that’s where the new hardtop convertible kicks in,” said Jamie Dewhurst, National Marketing Manager, Car and Crossovers, Chevrolet Canada. Base MSRP is $69,998 including freight and A/C tax, for the coupe/targa and $78,998 for the convertible. The Z51 package can be added to either car. Both cars are powered by the next-generation 6.2 litre small block V-8 LT2 engine pumping out up to 495 hp when equipped with the performance exhaust which comes standard with the Z51 package. An 8-speed dual clutch transmission, another first for Corvette, sends the power to the rear wheels. A manual transmission is not offered. 0-60 mph for the coupe equipped with the Z51 package is 2.9 seconds, which is blisteringly fast for a car in this price range. “To put that into perspective, our C7 Z06, with 150 more horsepower, was blazing fast with a 2.95 seconds 0-60, proof of how this mid-engine Corvette has really taken this to the next level,” Dewhurst stated. The first coupes should be on the road by April with the convertible following a few months later.


Mini John Cooper Works GP
The new limited edition 2020 Mini John Cooper Works GP is the fastest and most-powerful Mini ever made available to the public. Under the tiny front hood lurks a 301 hp 2.0 litre 4-cylinder turbocharged engine that can propel it from 0-100 km/h in 5.2 seconds, on the way to a top speed of 265 km/h. Peak torque is rated at 331 ft-lb from 1,750–4,500 rpm. Power is sent to the pavement via the front wheels through an 8-speed Steptronic sports transmission with electronic gear shifter, steering wheel shift paddles and integrated torsen limited-slip differential. 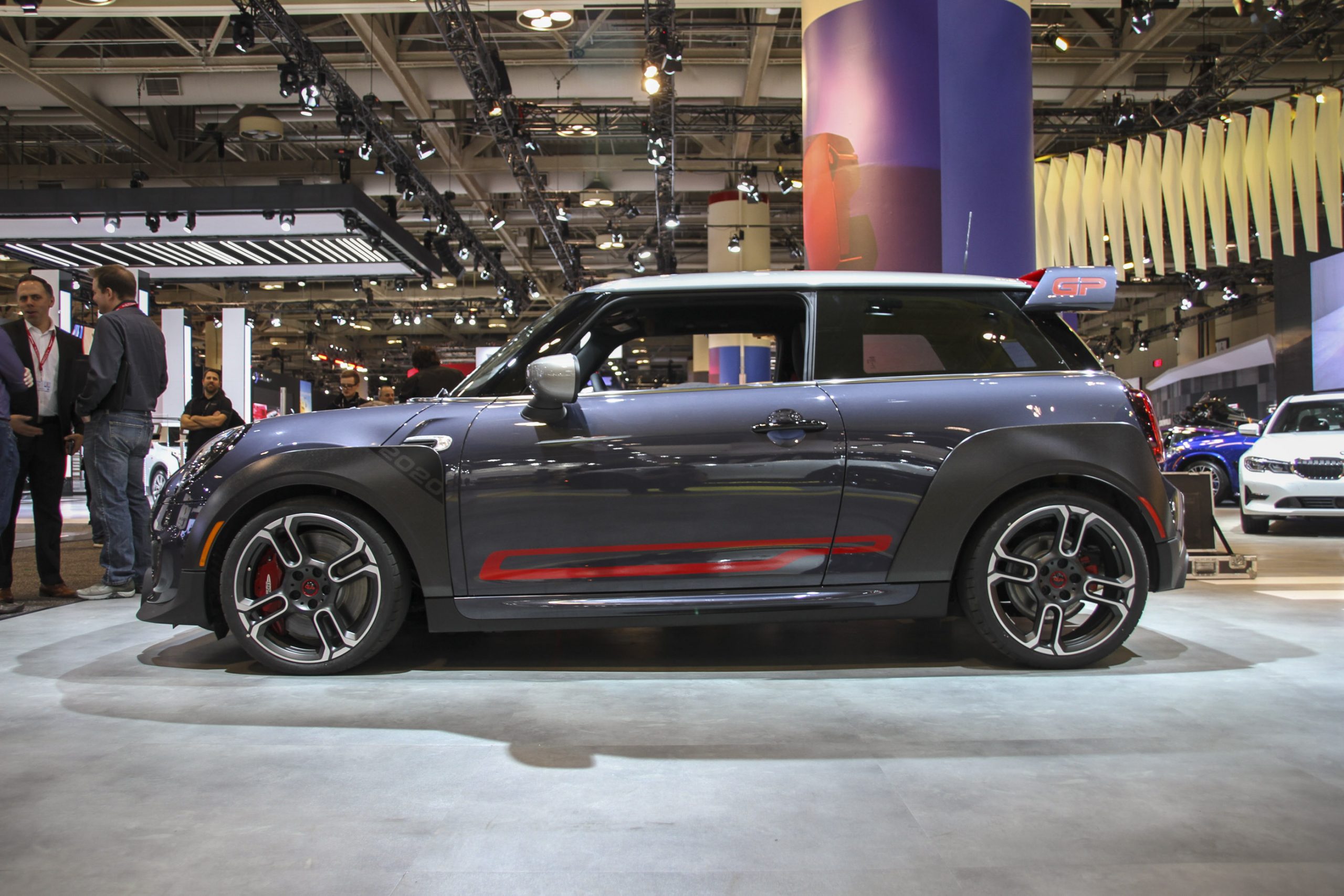 Stopping power is provided by high-performance sports brakes with 360 × 30 mm ventilated front discs and 18-inch lightweight forged wheels with 225/35 R18 Hankook performance tires. Just 3,000 units will be made available worldwide with only 59 coming to Canada. If you ever see one of these pocket rockets on the road, you will have seen something that is very rare. They will be arriving in Canada sometime after the second quarter of 2020. Also uncommon is a 3-door Mini with a base price of $51,990. To put that in perspective, the entry level 3-door Mini has a base price of less than half that, $24,590. 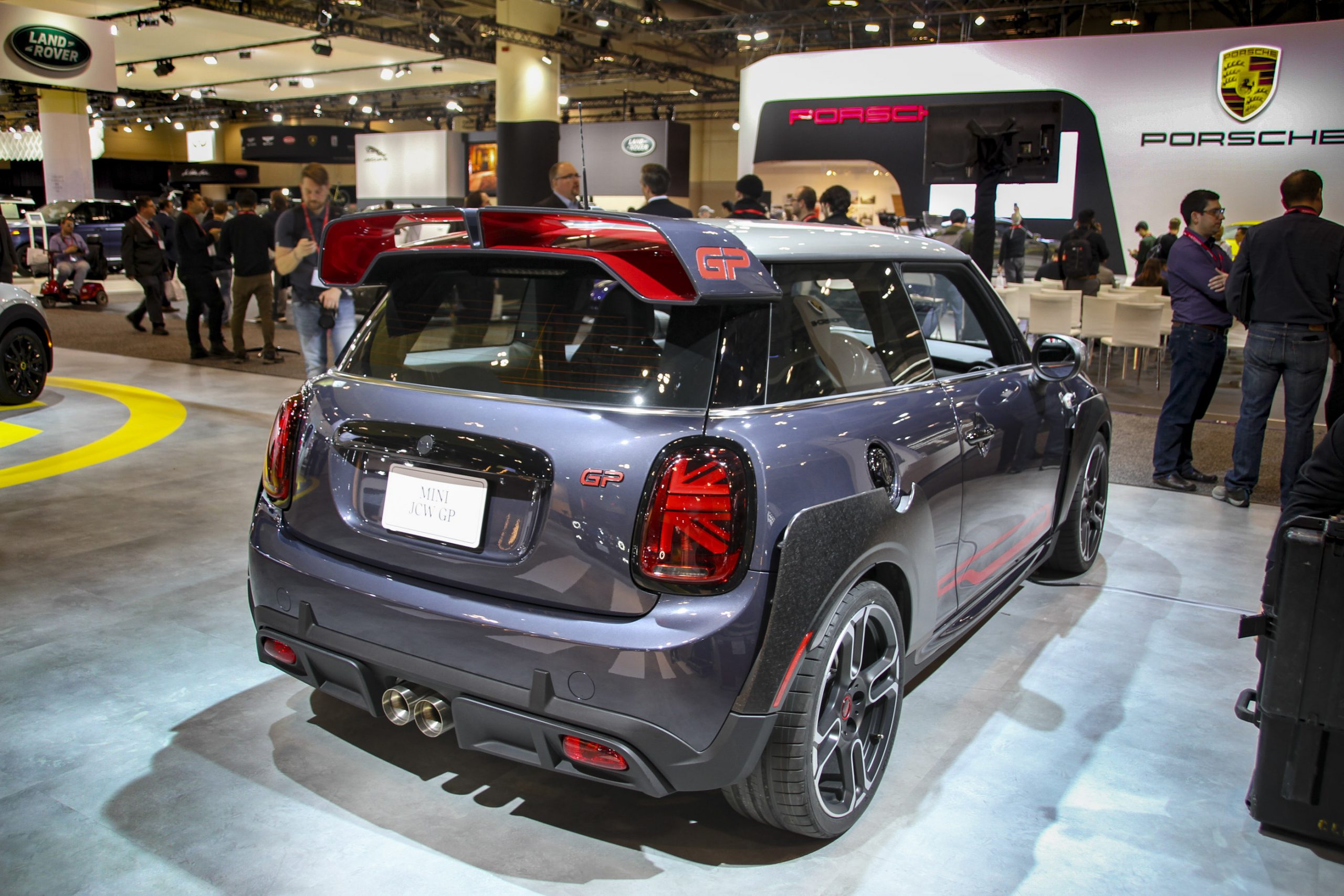 All Mini JCW GP’s come exclusively in Racing Grey Metallic with the roof and mirror caps in Melting Silver metallic. Each car is numbered from “0001” to “3000” on the surface of the front wheel arch panel. It’s worth buying this car just for that over the top rear spoiler. 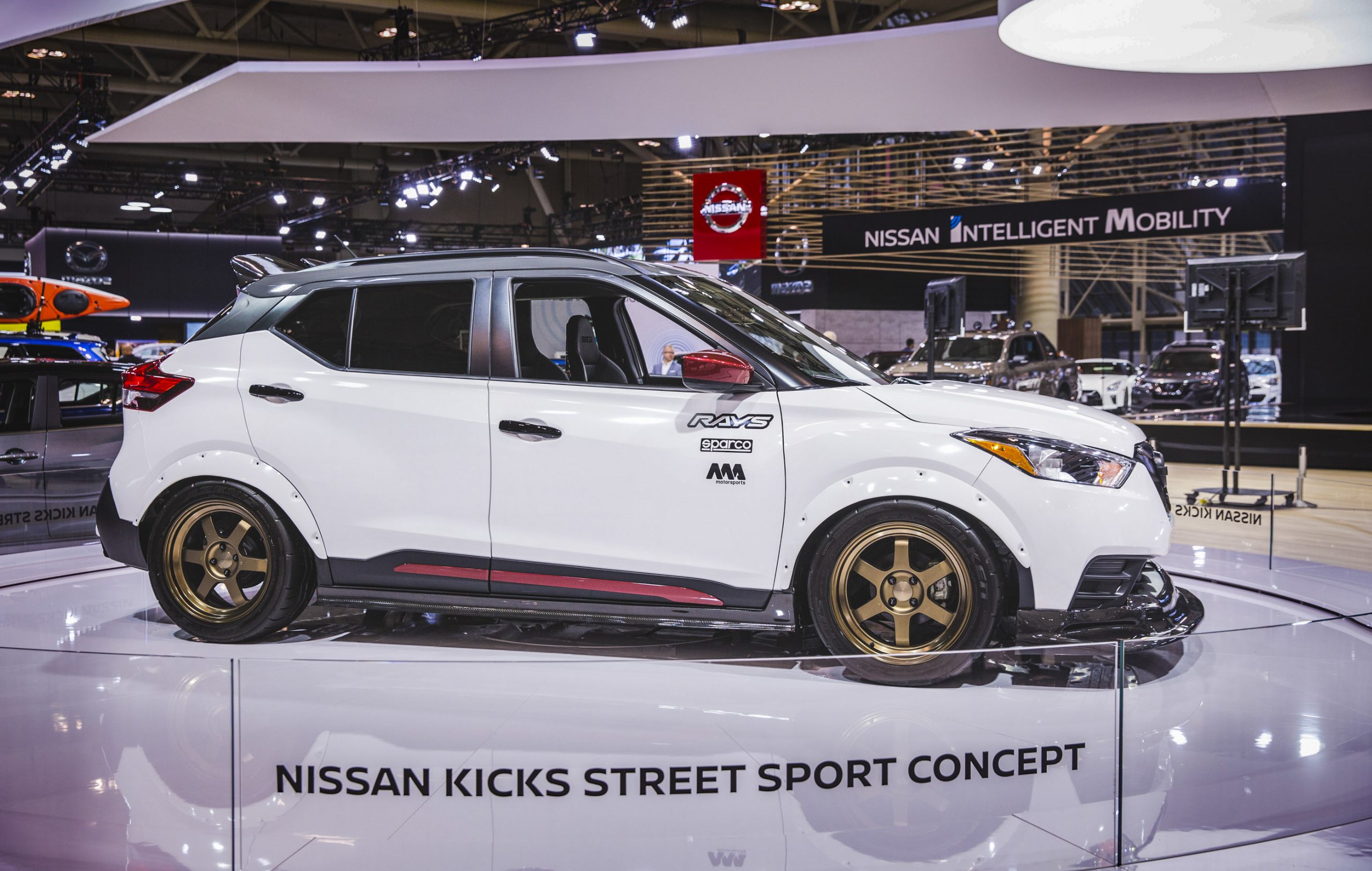 Porsche 935 and 718 Cayman GT4
Porsche unveiled the track only 935 and road going 2020 718 Cayman GT4. Built for the tack, the 935 pays tribute to the Porsche 935/78 Le Mans race car, which was fondly referred to as Moby Dick because of its elongated shape and massive fairings. It is based on the 911 GT2 RS and has a 6 cylinder turbocharged boxer engine that generates a staggering 700 hp. Only 77 of these club racers were made available worldwide. How much does all of that power and exclusivity cost, for a car that you cannot drive on the road? 700,000 Euros or the equivalent of $1 million Canadian.
The 2020 718 Cayman’s and 718 Boxster’s are powered by turbocharged boxer 4 cylinder engines Porches have done an engine swap for the GT4’s and powered them with naturally aspirated flat 6 cylinder GT engines. The 718 GT4 is the most extreme 718 offered and comes with a rather extreme price. The base 718 Cayman, with its lovely 6 speed manual transmission, starts at $64,400. The 718 Cayman GT4, also equipped with a 6 speed manual, will set you back another $49,400 bringing its MSRP to $113,800. 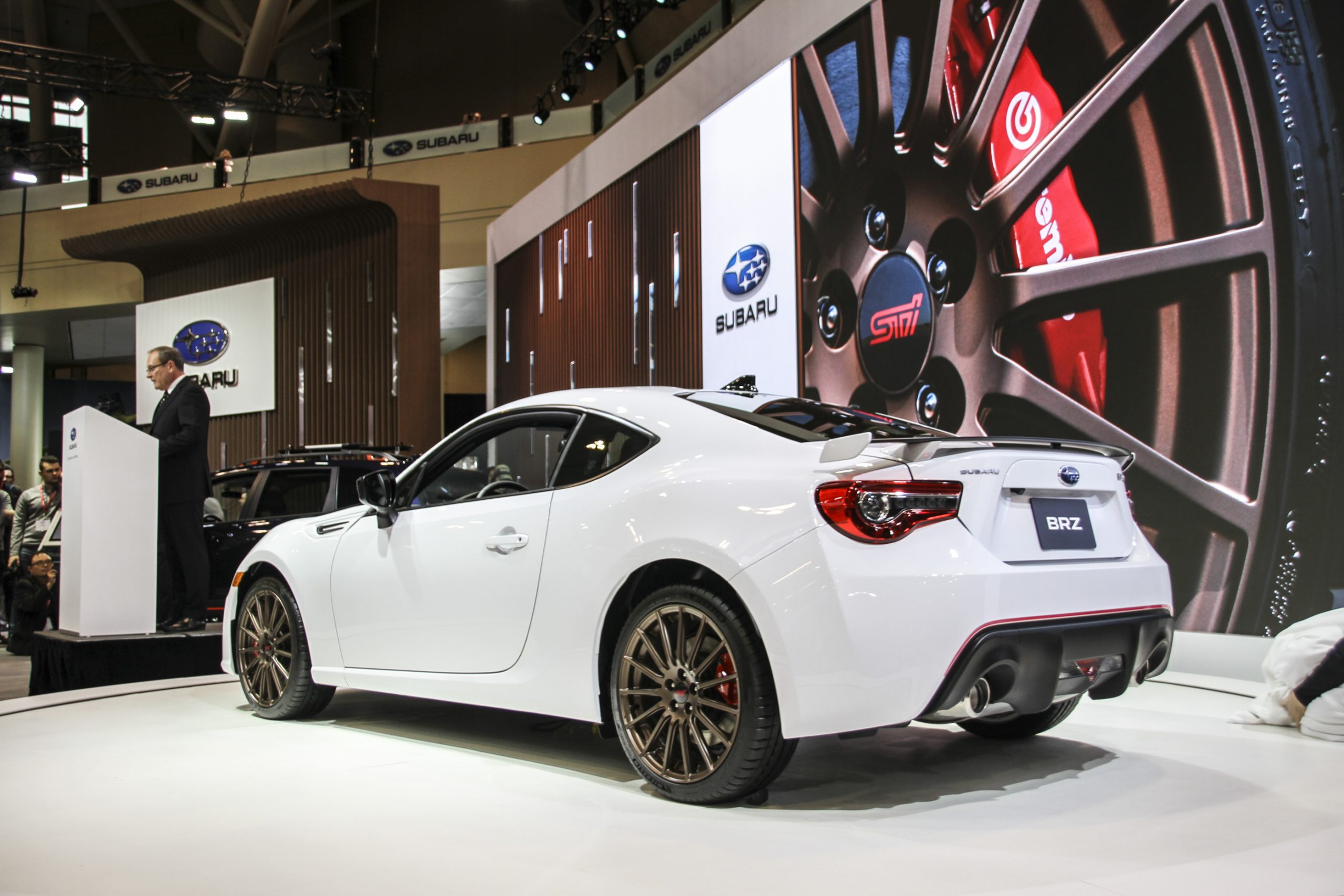 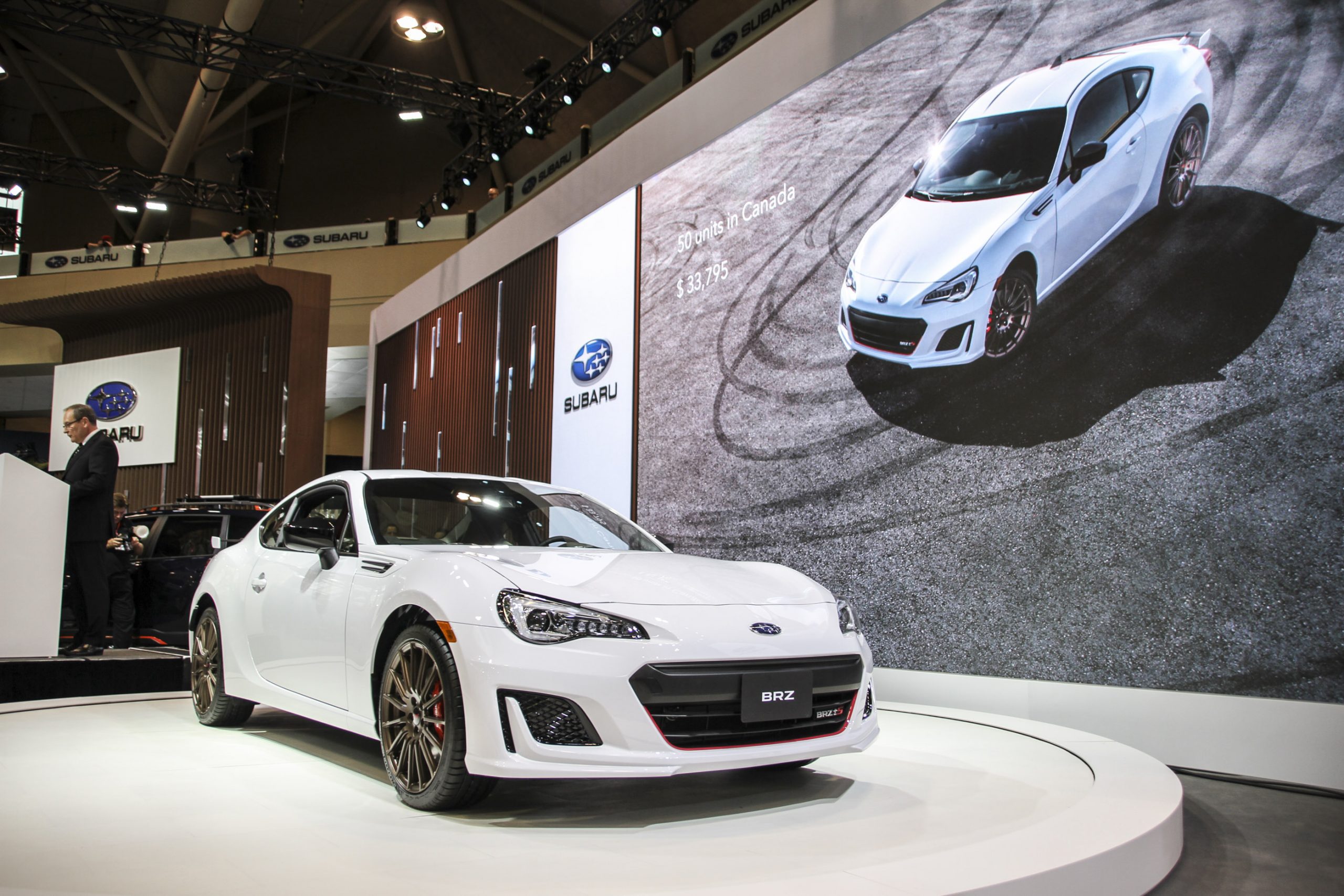 Subaru BRZ tS
Subaru Canada have created the limited edition 2020 BRZ tS which features exclusive performance upgrades. Only 50 of these cars will be made and all will be in non-metallic Ceramic White paint with a black leather and Alcantara interior featuring cherry red stitching. Performance upgrades include Subaru Tecnica International (STI) tuned SACHS dampers and coil springs, an STI flexible V-brace under the hood, draw stiffeners which have been added to the chassis and sub-frame to improve steering response, and Brembo four-piston calipers and rotors on the front and dual-piston calipers and rotors on the rear. The BSR tS is fitted with 18-inch wheels in matte-bronze with 215/40R18 Michelin Pilot Sport 4 tires. The chrome and red BRZ tS badge is mounted on the front grille and rear decklid. The mirrors, roof-mounted shark fin antenna, and fog light insert covers are all black. It is fitted with a low-profile rear spoiler. The 2020 BRZ tS is priced at $33,795. 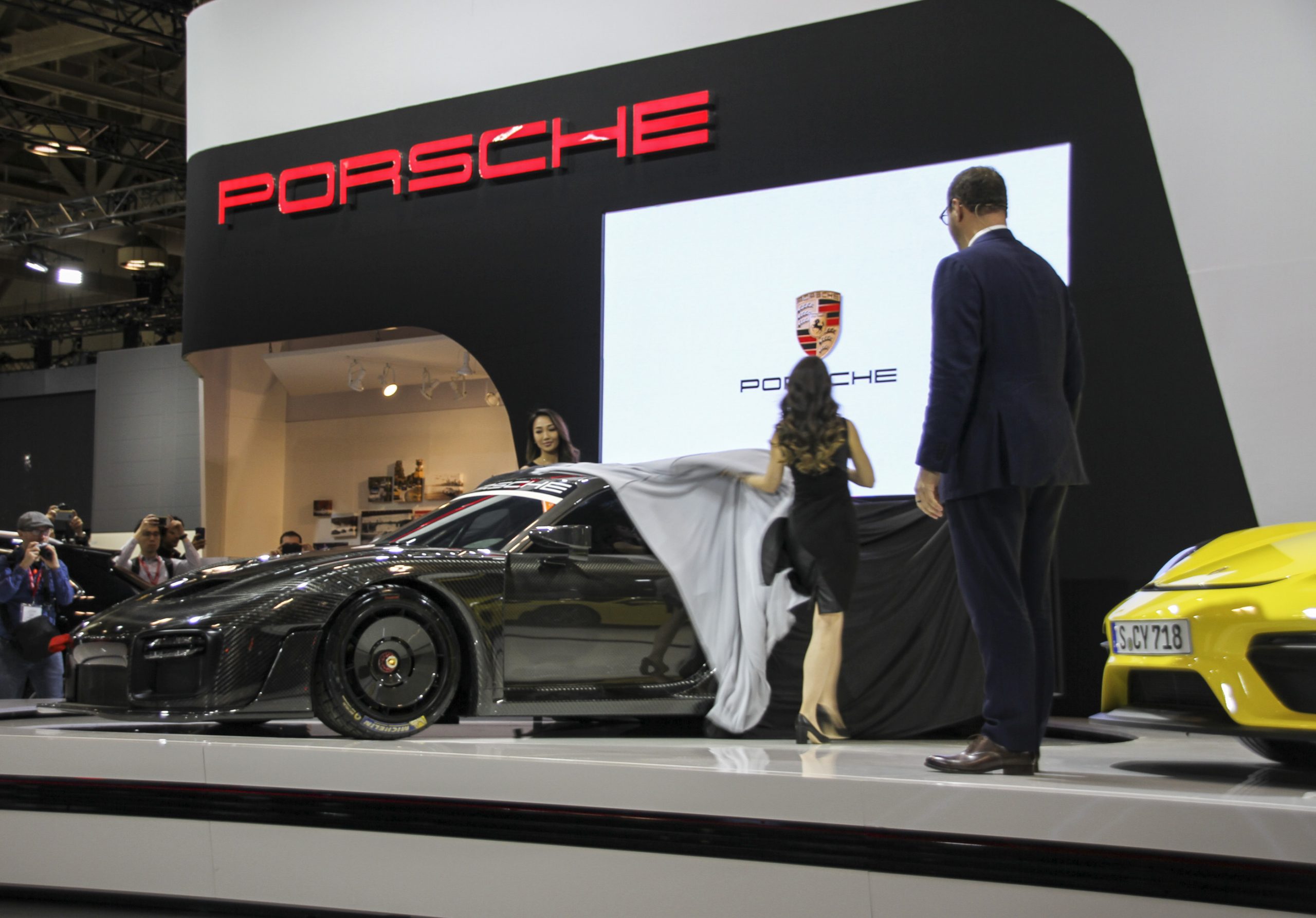 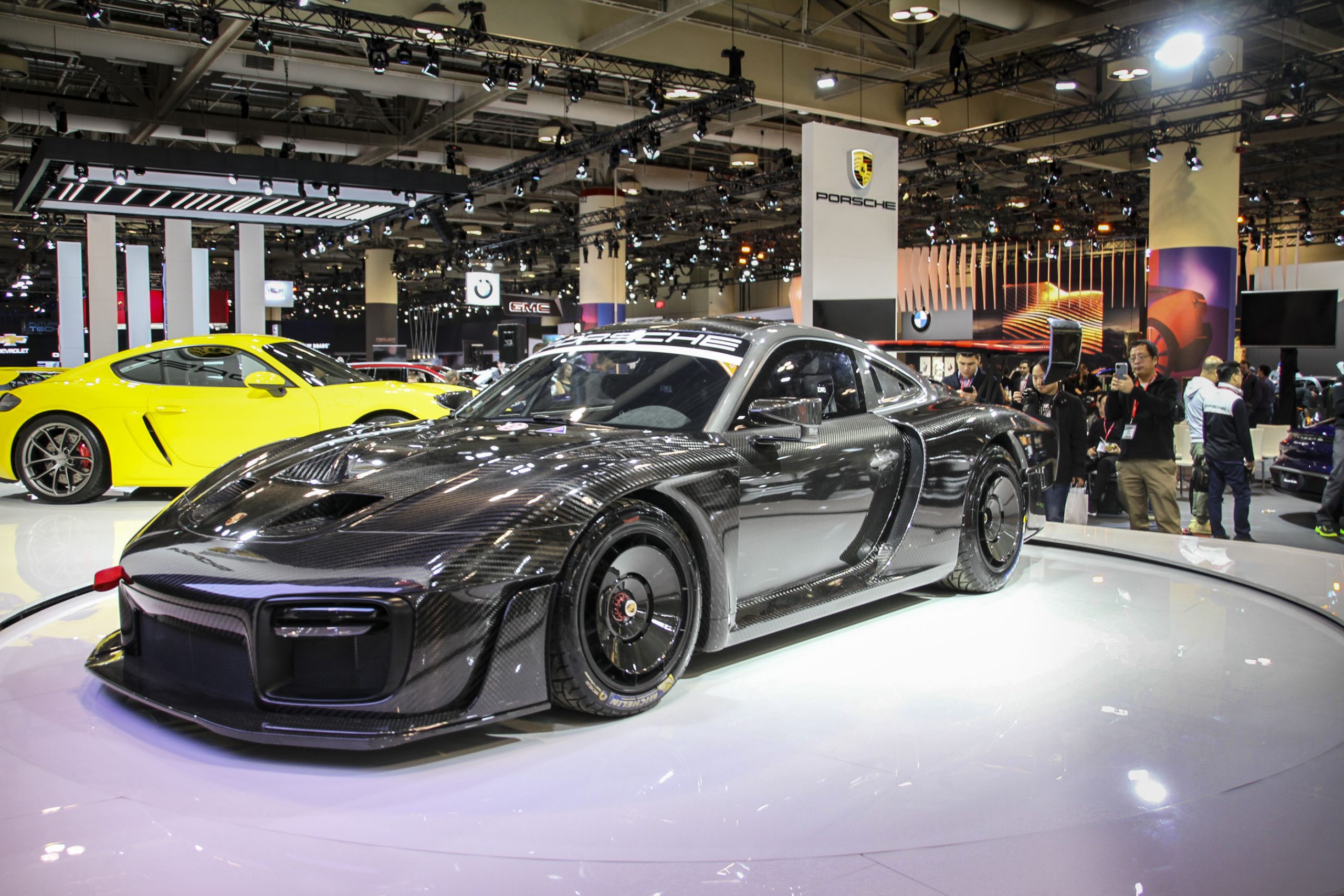 More TrackWorthy Cars
There are plenty of other TrackWorthy cars worth seeing at the car show, including these glistening high-performance machines:

Complete car show details can be found at the 2020 Canadian International Autoshow website.