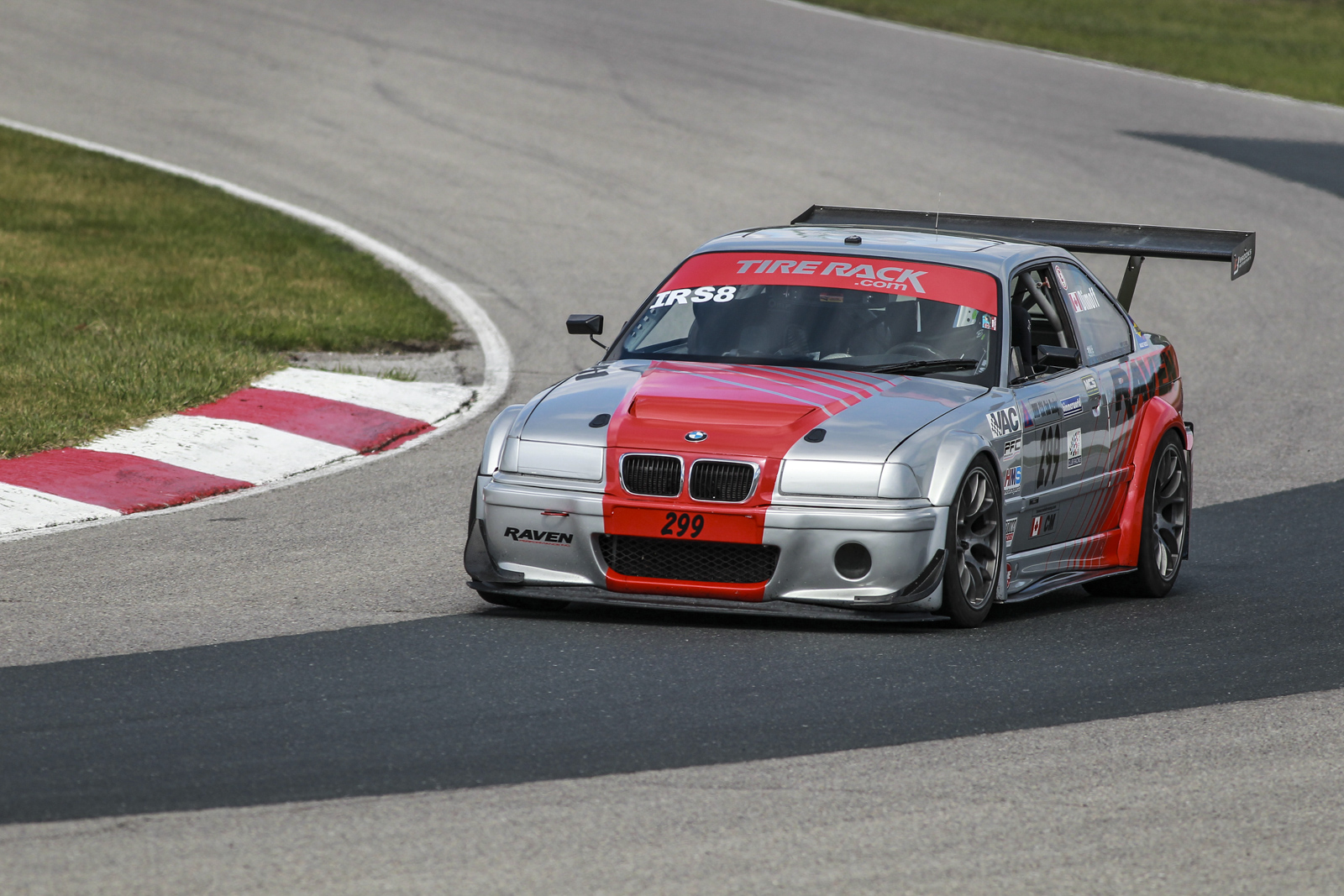 After completing an abundance of track days, honing your skills and sharpening your reflexes, you may be wondering, what’s next?

We have two words for you – an adjective and a noun: race school.

Ready to go back to school? We advise you bring your best study habits, because a quality race school is more reminiscent of a uni lecture spliced with a gymnasium beep-test than a substitute teacher-led quasi day off from scholastic activities. Conquering a race school requires true grit, firm determination, unwavering focus, a healthy dose of humility and a spirit of adventure. Show up shy of any of the aforementioned prerequisites, and you may not graduate. Worse yet, your car could meet the wall, and not in a friendly way.

Let’s start from day one of the two-day endeavour.

It was a wise choice to avoid caffeine. There was more adrenaline and cortisol coursing through my veins an hour before class started than I could ever recall at any run-of-the-mill track day. In my experience, coffee is rather superfluous before track day events – you wake up like a kid on Christmas morning.

I arrived early to get a front-row seat, resurrecting an old lecture hall habit. A gaggle of friendly assistants handed out course materials and name tags upon our arrival and as the room filled, a sign-in sheet made it official: we were here to learn how to race.

A few familiar names and faces were floating around the classroom. Louis Payant, chief instructor, was chiefly responsible for the success or failure of the school and the learning outcomes. Men and drivers I’ve looked up to for years – Peter Carroll, John Dimoff and Allan Lewis, to name a few – were mixed in with some 30 students. My ears were perked.

The standard and somewhat obligatory prefaces were made plain: leave your ego at the door, pay attention, don’t be late for any classroom session, and be sure to let your tires warm before expecting any grip. This last edict was especially relevant as it was snowing throughout part of the morning. This was a Canadian race school, after all.

But that’s where familiar ground ended. The school’s blunt, factual approach to racecraft was initially startling and a touch confronting. After years of stern warnings to avoid too much aggression we were finally told to take the gloves off. To pick off the cars in front of us skillfully and methodically. To battle for the best line, and seize any opportunity to execute a clean pass. To embrace, not supress, the ‘red mist.’

Many track battle stories were shared by the veteran racers and instructors in the room. Battle scars were revealed. Embarrassing mistakes from previous races were enjoyed with heavy laughter. We were shown several video clips highlighting the do’s and don’ts of wheel-to-wheel racing. Knowledge built up over decades of racing experience was shared freely and openly; it was as if they cable-linked our brains to download volumes of invaluable knowledge, skills and strategies. And after a few hours of classroom instruction it was time to let the rubber hit the track. 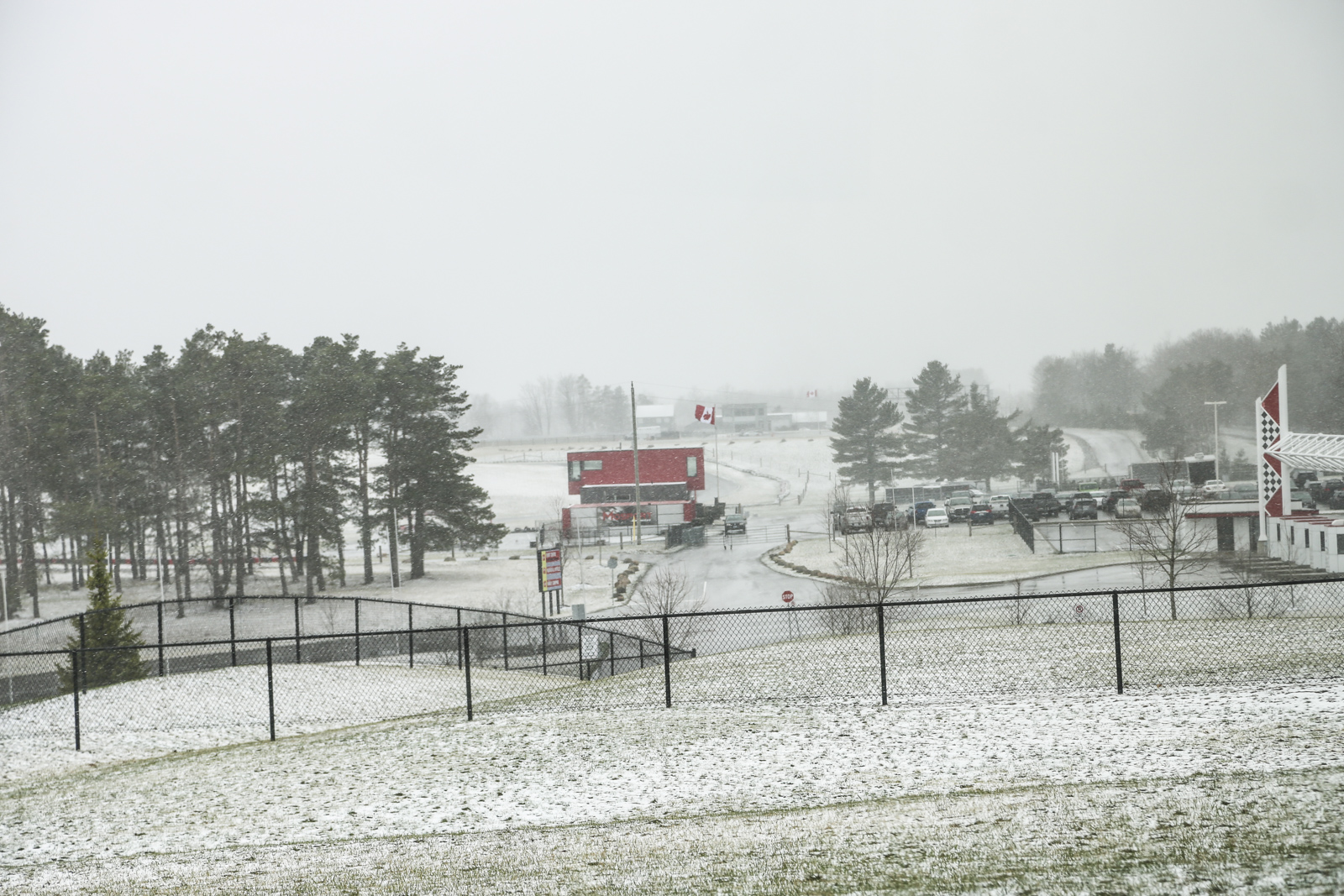 BMW CCA et al. chose our home track, Canadian Tire Motorsports Park (still lovingly remembered as Mosport) as the circuit upon which we’d learn how to race. And what better track could there possibly be, what with its blind crests, high-speed sweepers and optimal track width. The recently paved run-offs made the experience a little less hairy than the grass-edged corners of yesteryear afforded.

The behind-the-wheel portion of this race school prudently kicked off with exercises, starting with some racing fundamentals – id est driving three-wide around the track, late passing and passing through the apex.

Building upon these exercises, which sequentially increased in difficulty, we eventually worked our way up to grid formation, formation laps and race starts – which arguably, in some respects, constitute the pinnacle of racecraft.

Learning grid formation is quite different from the seat of a race car – mine generously prepared by 11Tenths Motorsport – than from the plastic seat of a classroom. Spatial awareness and situational awareness are absolutely essential to avoid trading paint, and these capabilities build with time and experience – hence the point of attending such a school as this. ‘Learning’ this in a live race environment would be next to insanity – almost inconceivable – unless your pockets are very well-lined indeed. 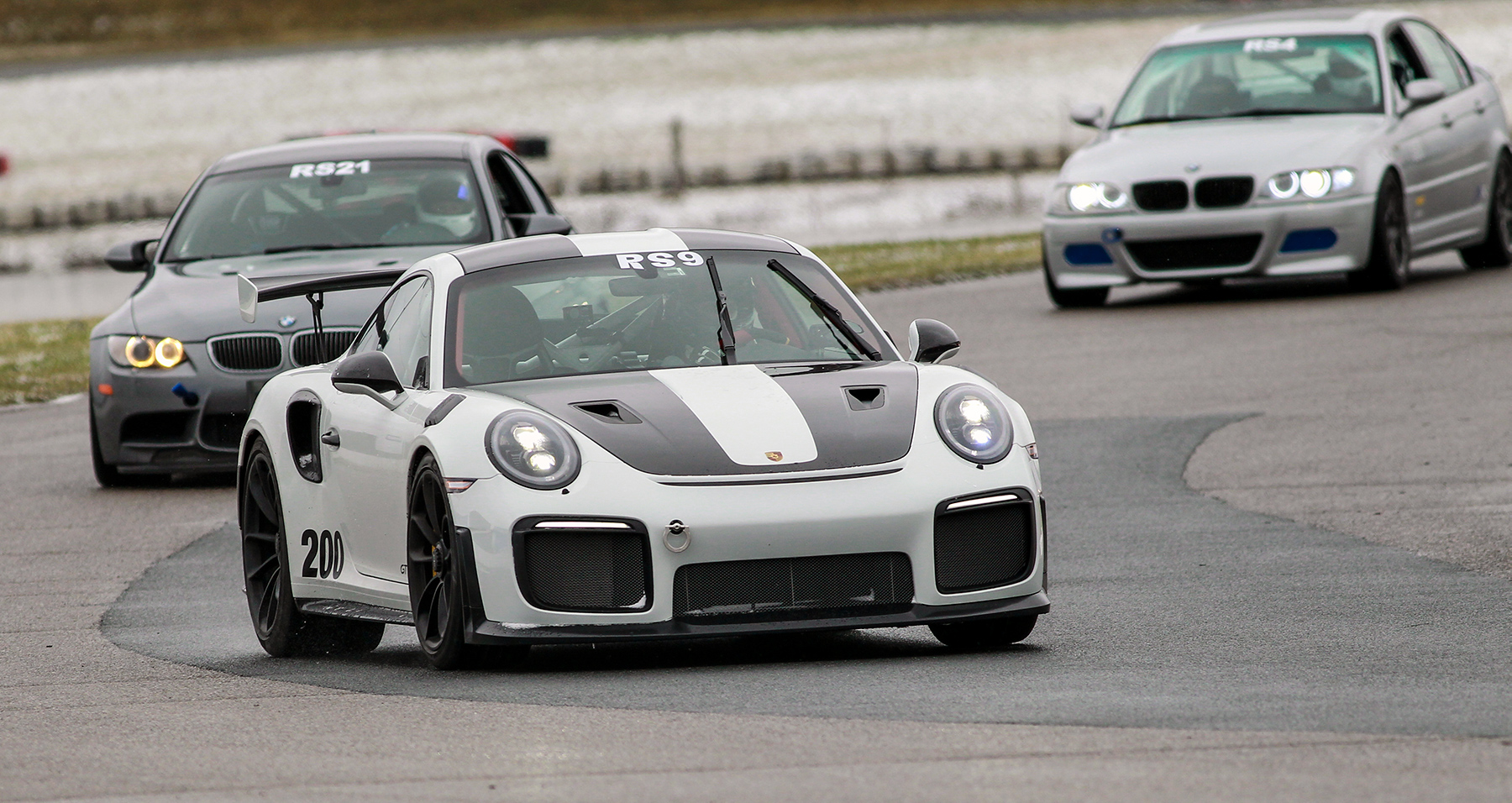 Finally, on the second day of training, it was time for our first-ever race – deemed, in a tongue-in-cheek manner, a “mock race.” Who were we kidding? It was wheel to wheel racing! And what a thrill it was.

The memory of every corner, every pass and every maneuver still clings to my mind. We took the green flag having formed a grid with random starting positions. I started roughly mid-pack and worked my way forward one and sometimes two cars at a time.

A few highlights come to mind: While passing a string of cars on the outside of turn 2, I was passed by a rather eager Porsche GT2 RS (yes, a new one!) on the paved exterior of the corner. That is to say, he passed me on the grass, which, thanks to safety efforts, was now paved. It was rather enjoyable, if being passed can ever be deemed enjoyable.

But glory was mine, lap after lap. It was rewarding to reel in faster cars with far more horsepower on what is generally deemed an engine circuit.

Divergent fates coalesced late in the race at Mosport’s – excuse me – CTMP’s notorious turn 5. Having chased down a well-prepared E46 M3, I found my opportunity to execute a pass through the high-speed left-handed downhill sweeper that is turn 4. I entered the corner with more speed, and took a wide line, passing the M3 on the outside, which set me up nicely for a controlled enty to turn 5A while easily blocking any counter-attempt to retake. I had built enough of a gap by the entry to 5A that I entered the corner alone. Cognizant of my massive horsepower disadvantage of roughly 100 horses, I knew that a clean, fast exit from 5B was essential to have any chance of holding position down the back straight. 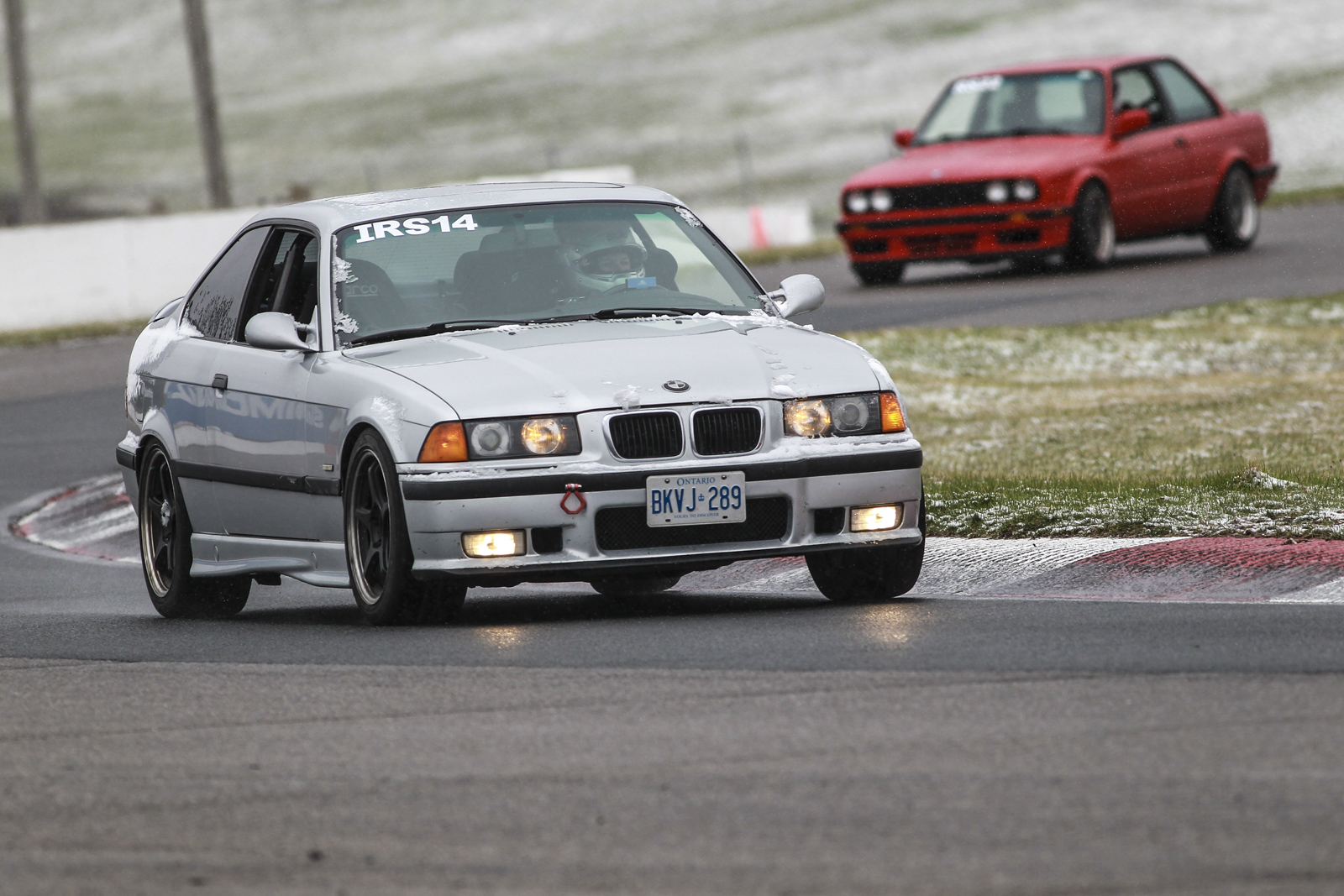 As it happened, I didn’t have to worry about being retaken by this car ever again. It was, unfortunately, a write-off. I saw the whole thing in my rear-view mirror as I powered up the hill with 5B fully behind me.

The driver of the M3 clearly knew of his power advantage, but in his haste to retake me he forgot a few fundamentals, and it cost him dearly. 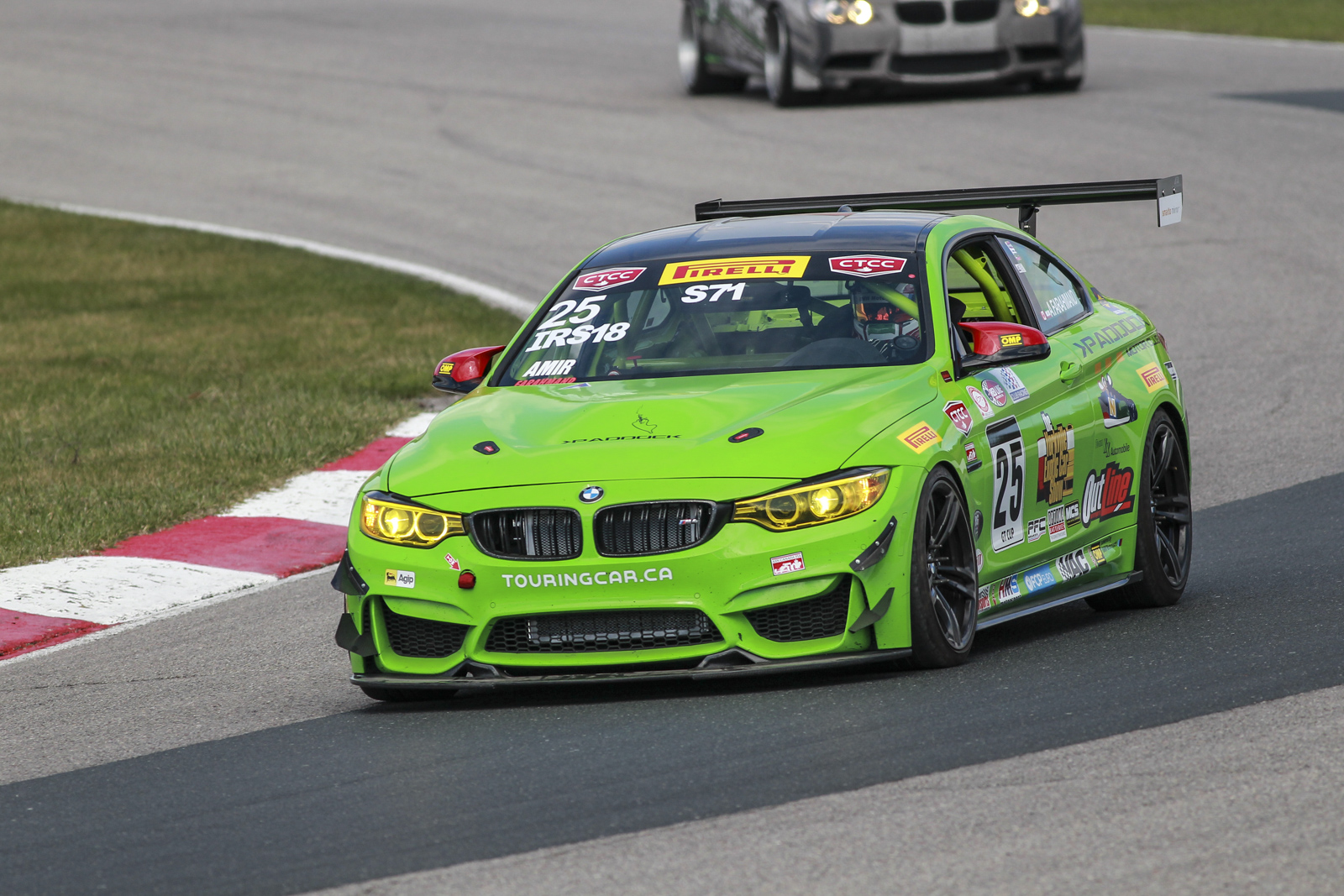 An ill-advised, excessive throttle application got his car rotating as he exited 5B, and he failed to catch or drift the slide. Instead, he plowed firmly into the concrete barrier on the inside of the corner, his hood and frame crumpling nearly to the fire-wall. Steam and tire smoke wafted from the car, as if a smoke signal to indicate defeat. Ambition exceeded skill, and the outcome was heart-wrenching to watch from my rear-view mirror. Luckily his safety equipment performed as intended, and he walked away from the crash without injury.

Not only did this driver write-off a beautiful black sapphire metallic BMW M3, he failed to graduate this race school. A heavy price to pay.

A few others in the class failed to graduate after meeting the wall, or due to safety violations – namely passing under yellow flag conditions.

I went on to pass a few more cars, and I was also passed by a few faster cars as well. It was a brilliant race, a fitting first, and a memorable experience I’ll treasure the rest of my days. 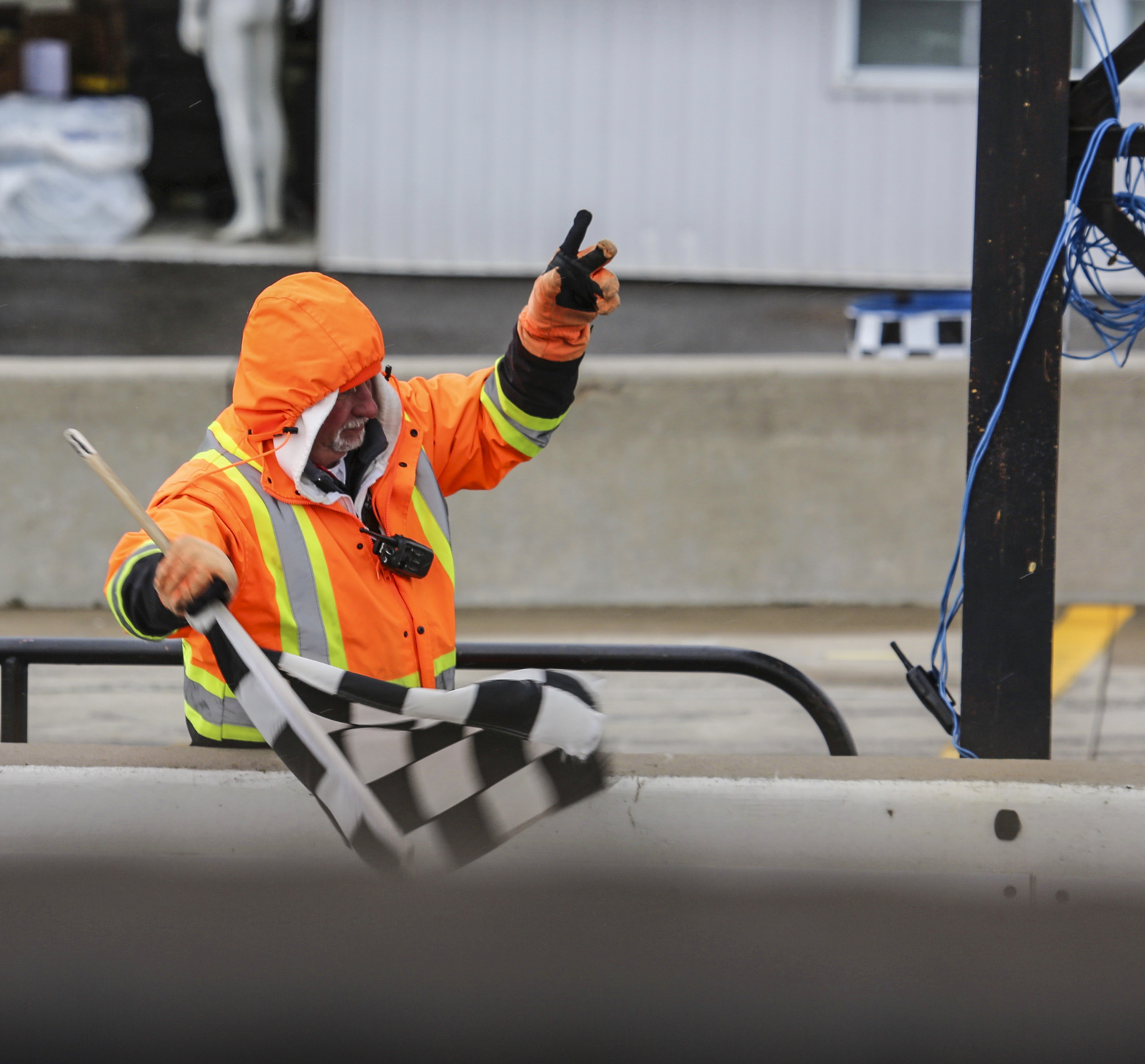 When the checkered flag fell it was time to solidify lessons and bring the car back to the pits. My race team stood along the wall, cheering me on as if I’d brought them a victory.

It’s hard to put the experience into words, but in a word, BMW CCA’s race school was fulfilling. It fulfilled a lifelong dream. It also allowed me to earn my racing licence.

Not sure where to turn after many a track day? Race school is where it’s at.

TrackWorthy wishes to extend a special thanks to BMW CCA, BMW Trillium Club and Bimmerworld for making this experience possible. As a consequence of this training, we feel more TrackWorthy than ever.