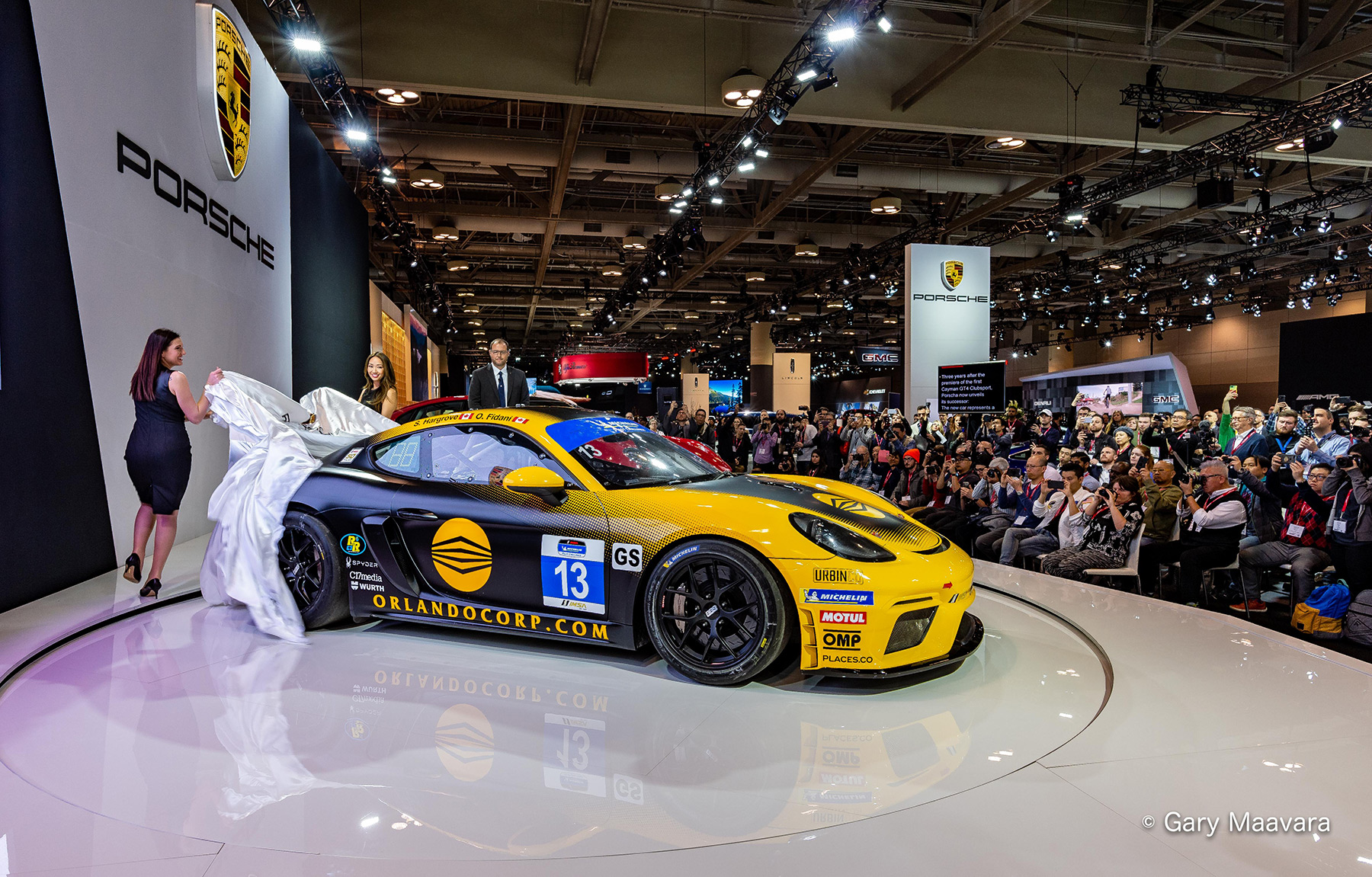 “The Canadian International AutoShow is one of the few major auto shows in the world that features every manufacturer retailing vehicles in that country.” Jason Campbell, CIAS General Manager

Automobiles from every major manufacturer are on display at the 2019 Canadian International AutoShow which takes place from Friday February 15 to Sunday February 24 at the Metro Toronto Convention Centre in downtown Toronto. Presented by the Toronto Star and wheels.ca, the AutoShow is Canada’s largest consumer show which saw more than 350,000 attendees in 2018. More than 1,000 glistening automobiles are on display on more than 650,000 square feet of display space in the North and South buildings.

“The Canadian International AutoShow is one of the few major auto shows in the world that features every manufacturer retailing vehicles in that country,” said Jason Campbell, the shows General Manager. “We have an audience that continues to grow. This enthusiasm from both our manufacturers and retailers has been what’s made The AutoShow the best place to shop and compare the newest cars in the market, and the 2019 AutoShow (is) no exception.”

There are many TrackWorthy cars on display at this year’s AutoShow. In addition to the Ford Mustang Shelby GT500, Dodge Challenger SRT Hellcat Redeye, the Nissan Leaf NISMO RC, and the Volkswagen I.D. R Pikes Peak, here are some of the other highlights: 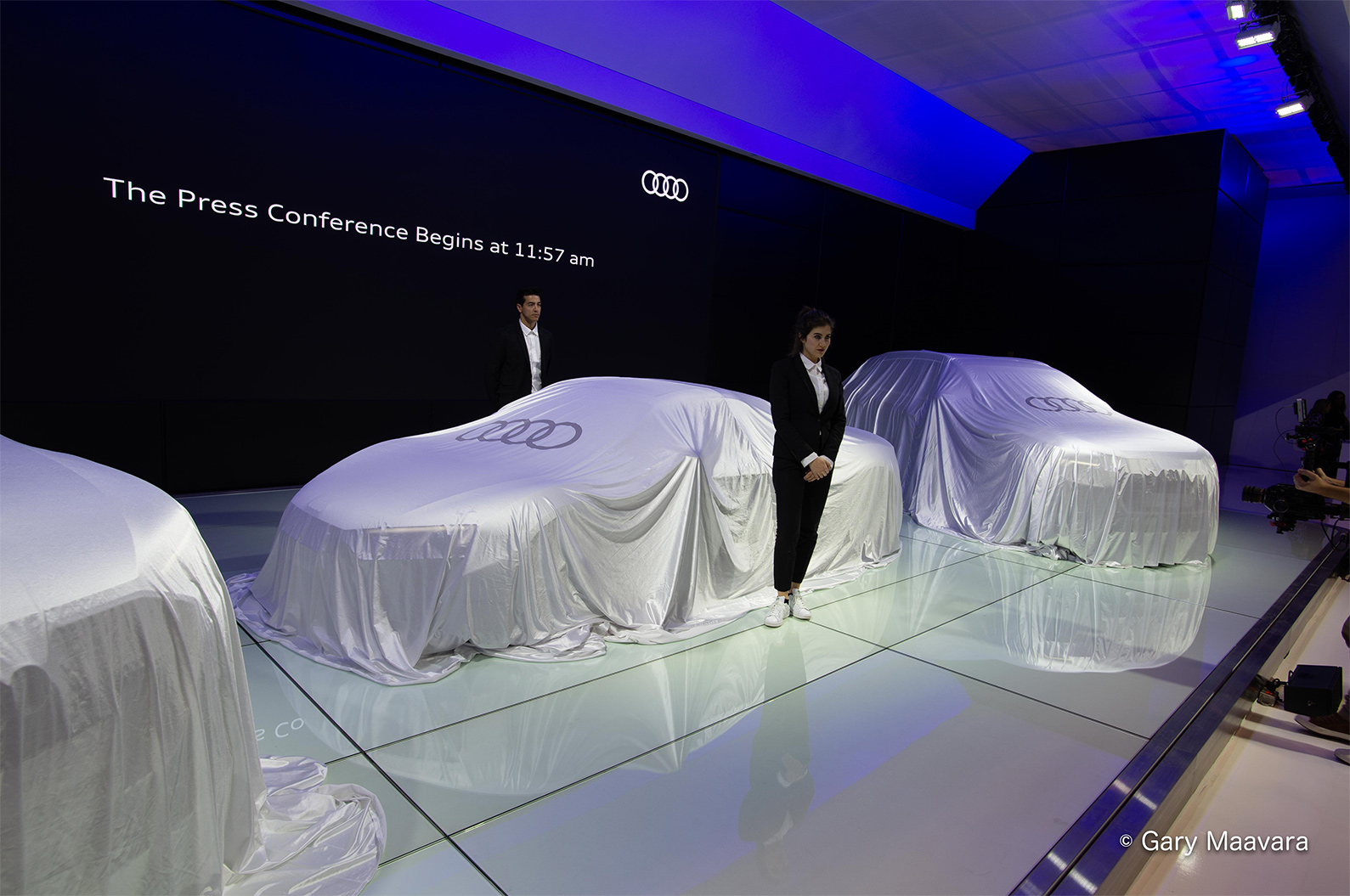 Audi unveiled the updated 2020 R8 Spyder which is scheduled to be in showrooms in June. Two versions are available, both of which are powered by more powerful naturally aspirated V10 engines. The base model starts at $201,400 and is fitted with a 532 hp V10. The $233,400 Performance model’s V10 pumps out more than 600 horsepower (602 to be exact). With the assistance of launch control via the 7 speed S Tronic gearbox sending power to all four wheels, acceleration from 0-100 km/h can be achieved in as little as 3.4 seconds on the way to its top speed of 328 km/h. The R8 is capable of achieving a very impressive lateral acceleration of 1.5 G’s.
Audi’s racing heritage is built into every R8. “Motorsport is part of our DNA,” stated Oliver Hoffmann, Technical Managing Director of Audi Sport GmbH. “With around 50 percent shared parts with the R8 LMS GT3 and even 60 percent with the R8 LMS GT4, no other automobile is so close to motor racing as the R8.” 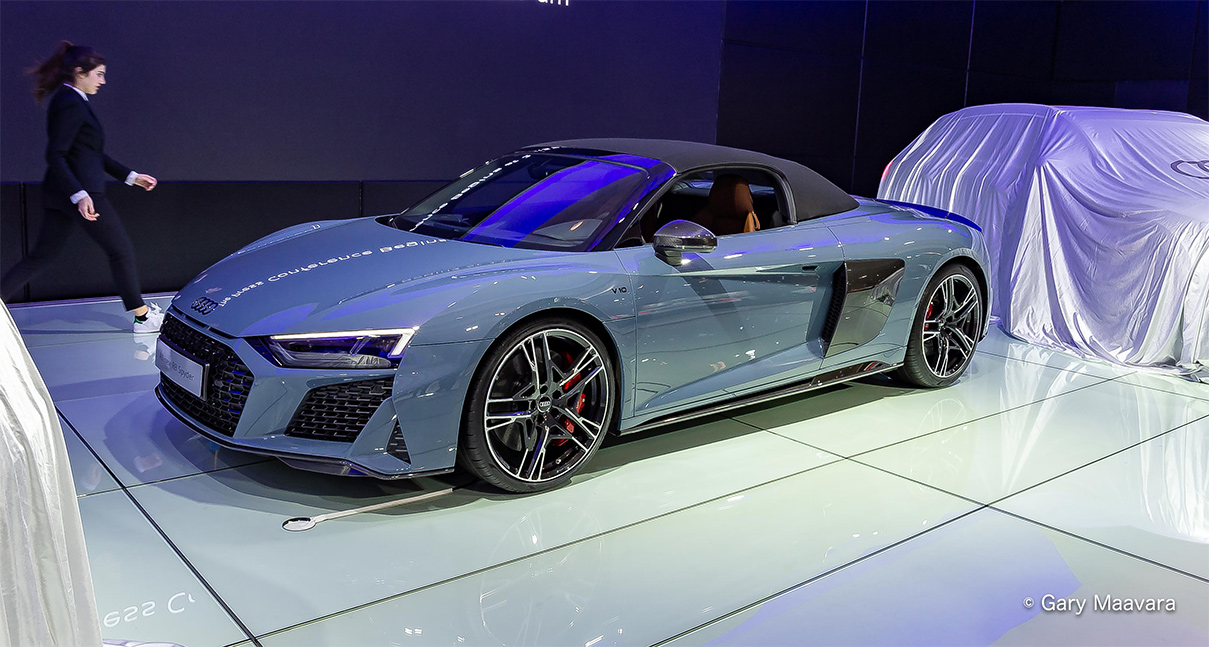 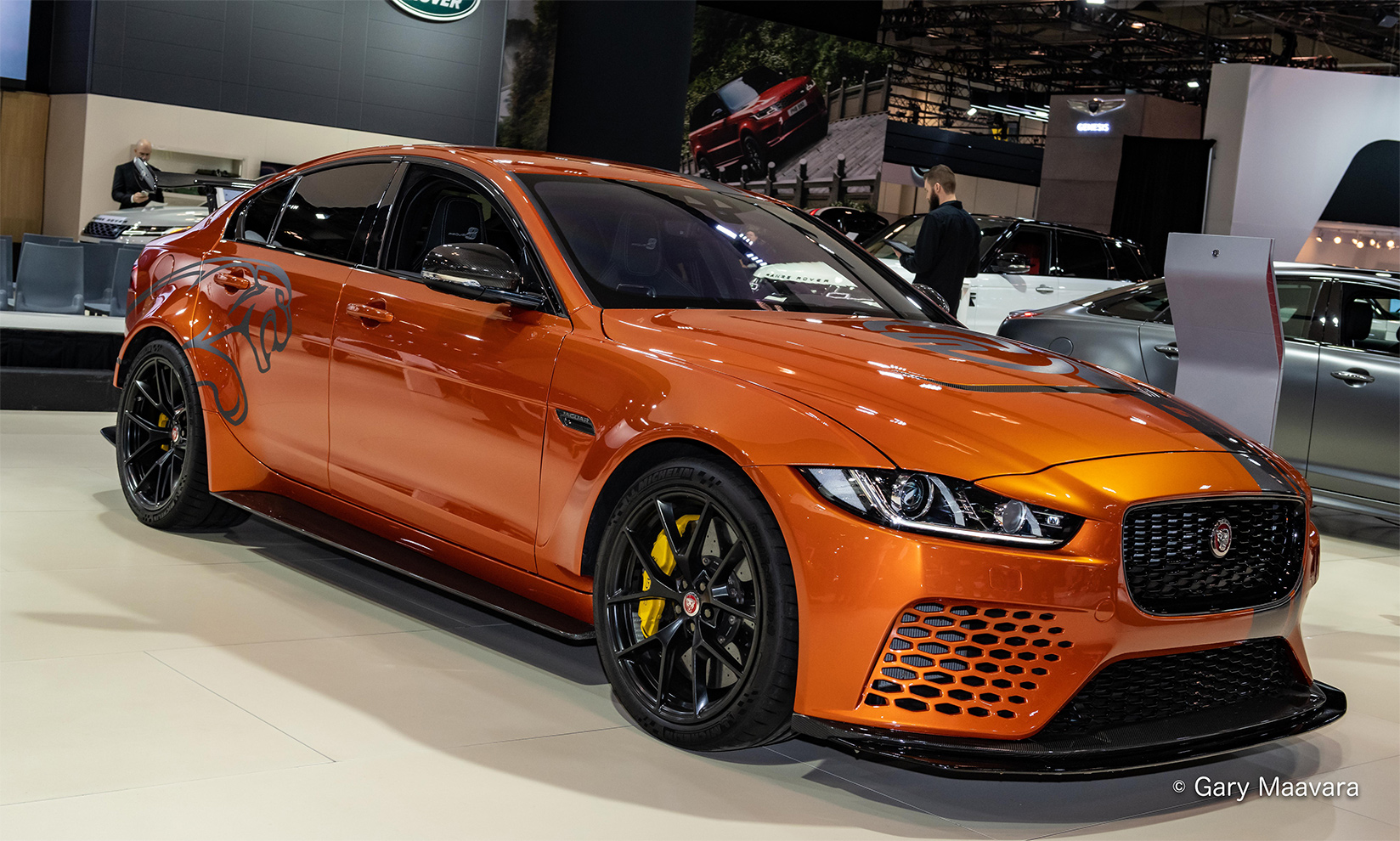 The Jaguar XE SV Project 8 is the most extreme street legal performance car Jaguar has ever built. Under the ‘bonnet’ is a 5.0-litre supercharged V8 that generates 592 hp. Only 300 of these cars will be built for the entire world, so seeing one in person may only happen at the Canadian International AutoShow. The odds of seeing one of these extreme cars on Canadian roads is pretty slim. Each car is hand assembled at the Special Vehicle Operations (SVO) Technical Centre in Warwickshire, England. 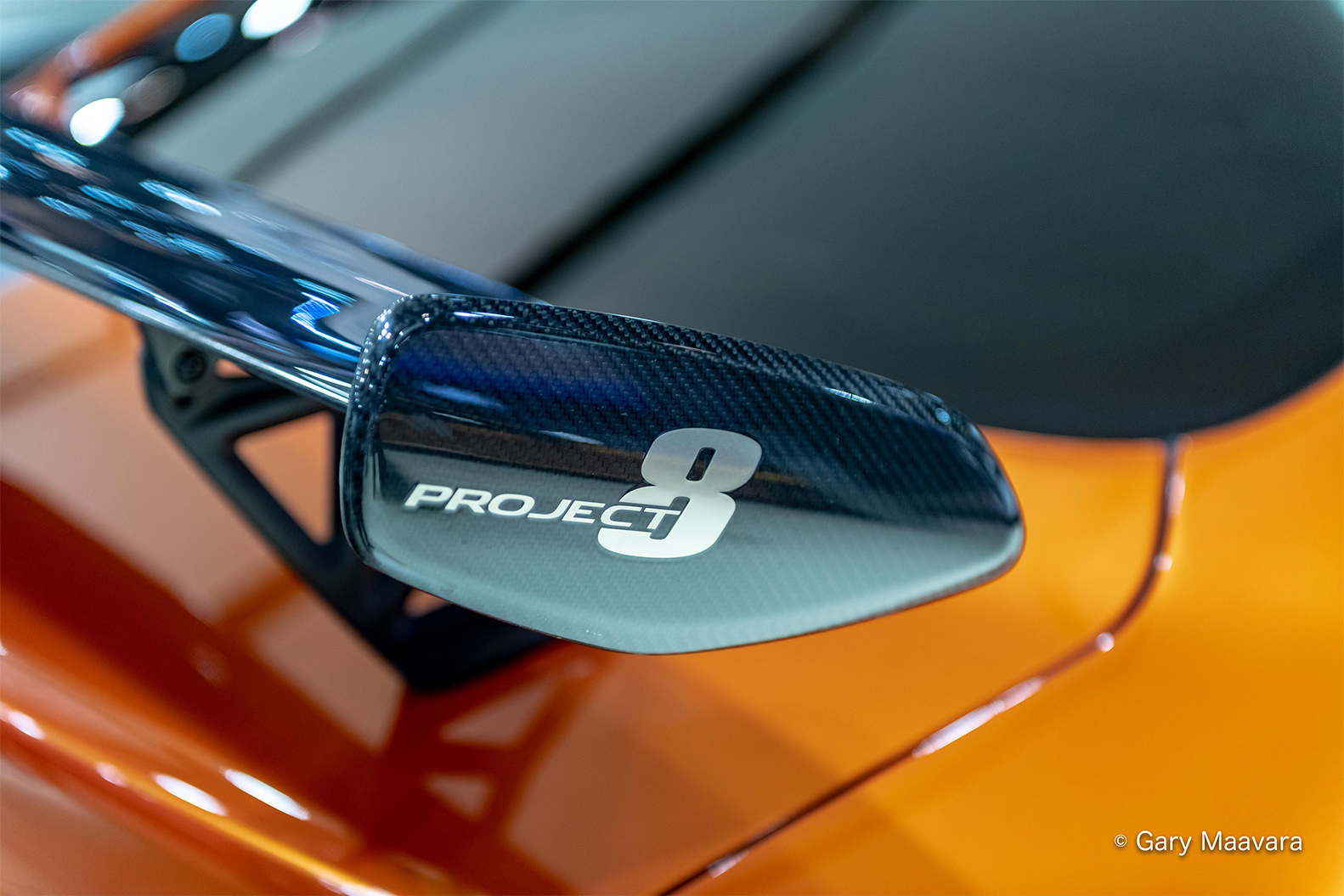 The Project 8 set a lap record around the famed Nurburgring Nordschleife setting the quickest lap time ever for a street legal four door sedan. The ability to slow down the Project 8, from a top speed of 322 km/h, is achieved by the largest and most technologically advanced carbon ceramic brakes ever fitted to a Jaguar production car. They are lighter too, saving 18 kg’s of unsprung weight. The Project 8’s front racing seats are trimmed in Ebony leather with Oyster contrast stitching and are made from special lightweight magnesium-frames. 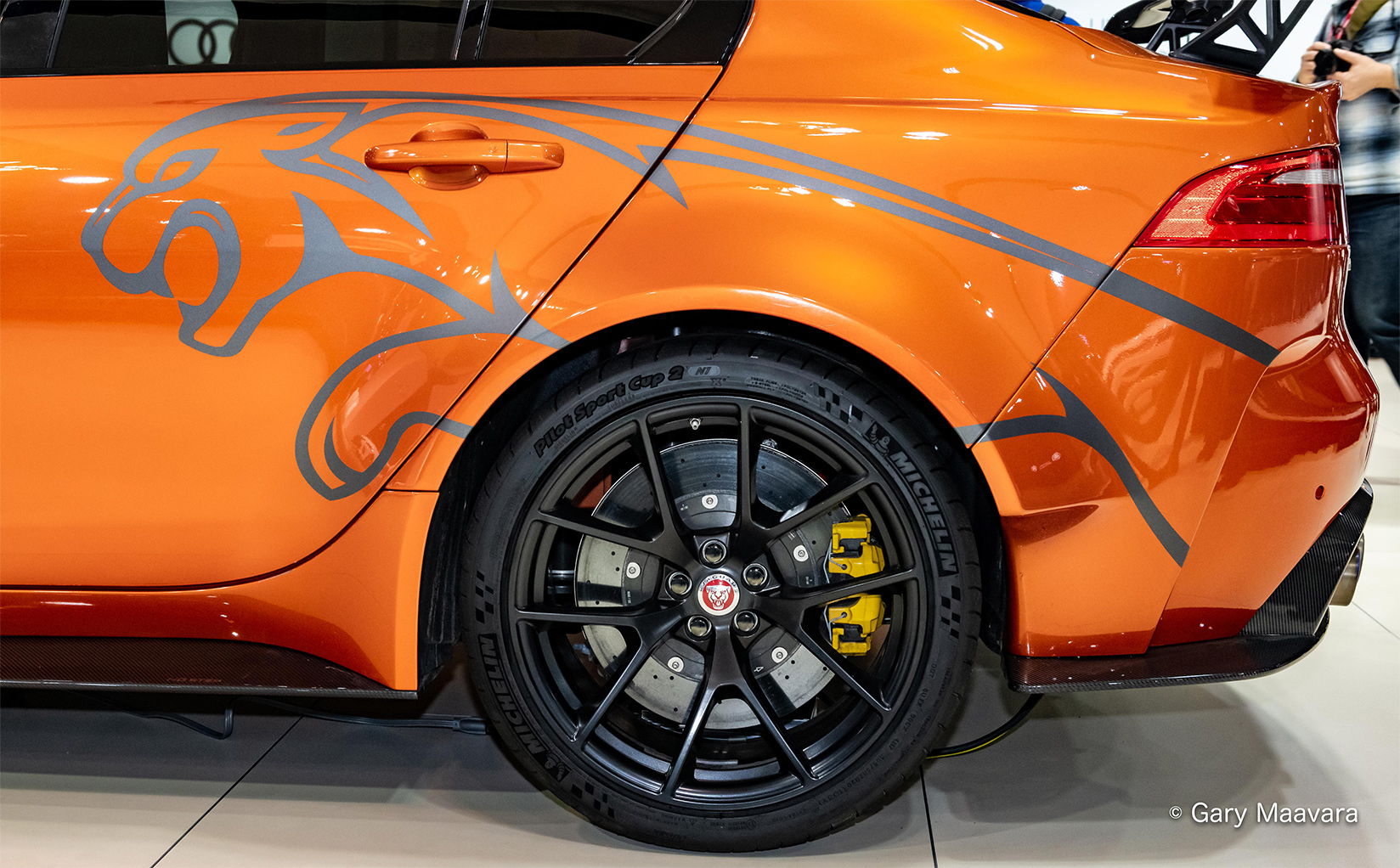 The Project 8 body has received extensive aerodynamic performance upgrades including an adjustable front splitter, rear diffuser and large adjustable rear spoiler. The angle of the rear spoiler can be adjusted to either reduce drag or maximize downforce. The wing can achieve up to 122 kg of downforce at speeds of 300 km/h. The base price for the XE SV Project 8 is $208,000. 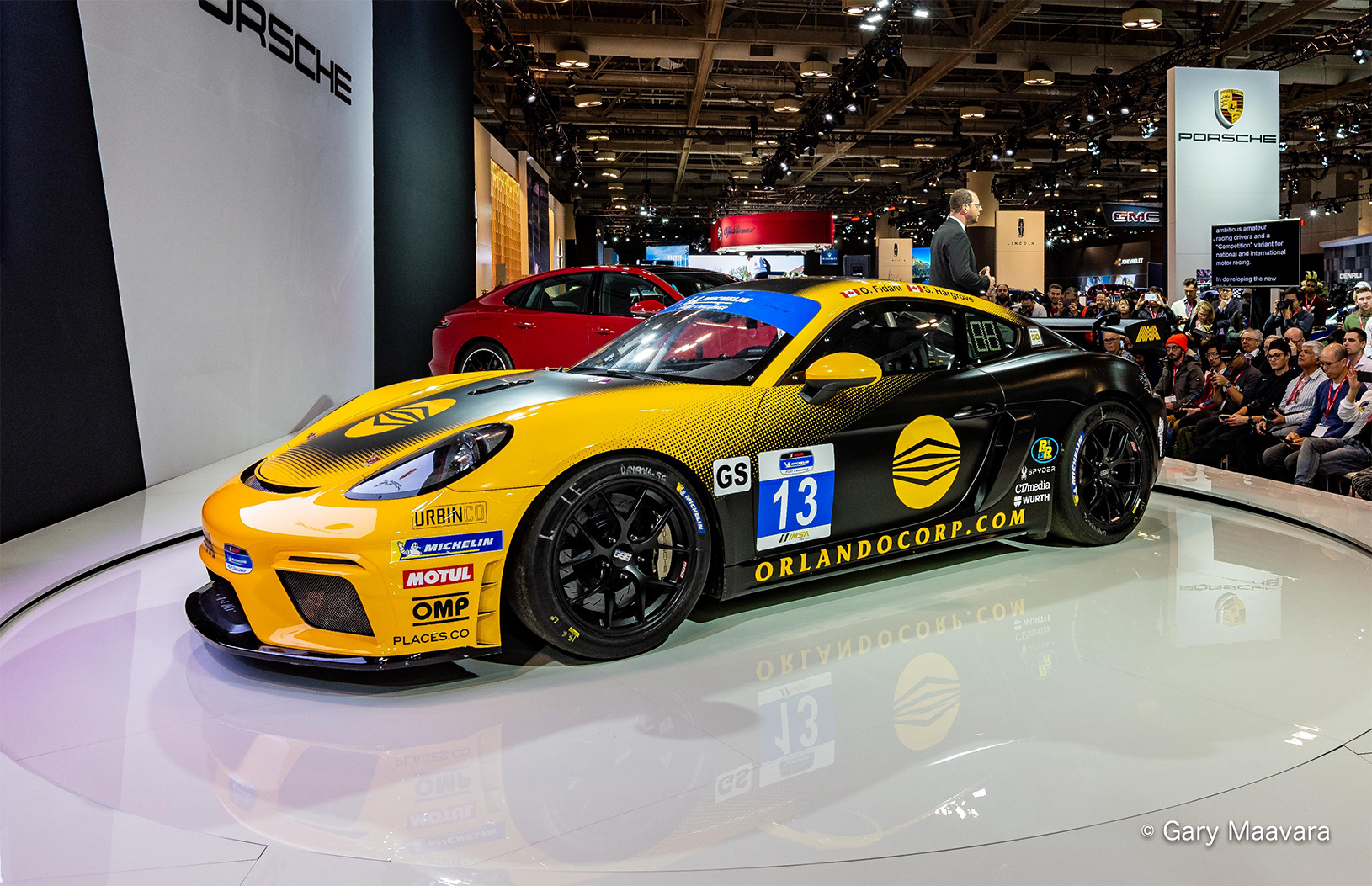 In addition to engineering the car to go faster, the new GT4 Clubsport is the first production race car to be built from body components made of natural-fibre composite material. The doors and the rear wing are made from an organic fibre mix sourced from agricultural by-products including flax and hemp fibres. It has similar weight and stiffness properties as carbon fibre.

The Porsche 718 GT4 Clubsport is powered by a 3.8-litre flat-six cylinder engine that generates 425 hp, up 40 hp over the previous generation. Power is sent to the rear wheels via a 6-speed PDK dual-clutch transmission. The racing braking system features 380 millimetre diameter steel brake discs at all four corners. The 718 Cayman GT4 Clubsport weighs in at just over 2,900 pounds (1,320 kilograms).

“The new Porsche 718 Cayman GT4 Clubsport possesses significantly more racing genes than its successful predecessor,” stated Porsche’s head of motorsport Fritz Enzinger. “The power of the engine has increased considerably. At the same time, we were able to increase the downforce and the cockpit is now even better suited to drivers’ needs. I’m confident that we can build on the excellent sales figures of the predecessor, of which we have delivered 421 cars.”

Canadians Orey Fidani and Scott Hargrove will be racing this Cayman GT4 Clubsport in the IMSA Michelin Pilot Challenge series, which has a stop in Canada at the Canadian Tire Motorsport Park near Bowmanville, Ontario on July 5 to July 7, 2019.

Also on display is a 2019 World Rally Blue Pearl WRX STI Sport Tech. It is powered by Subaru’s tried and true turbocharged 2.5 litre Dual Overhead Cam 16-valve, horizontally opposed, 4-cylinder boxer engine. It generates 310 hp at 6000 rpm and 290 lb-ft of torque from 4000-5200 rpm. The WRX STI comes with 19-inch aluminum rims and yellow painted Brembo 6-pot front & 2-pot rear brake calipers with ventilated and cross-drilled rotors. The car on display featured 8-way power Recaro driver’s seat with leather accents and Ultrasuede seat surfaces. The 2019 WRX STI Sport Tech has a base MSRP of $47,295 and comes with, or without, the classic large rear wing (it is a no charge delete option). 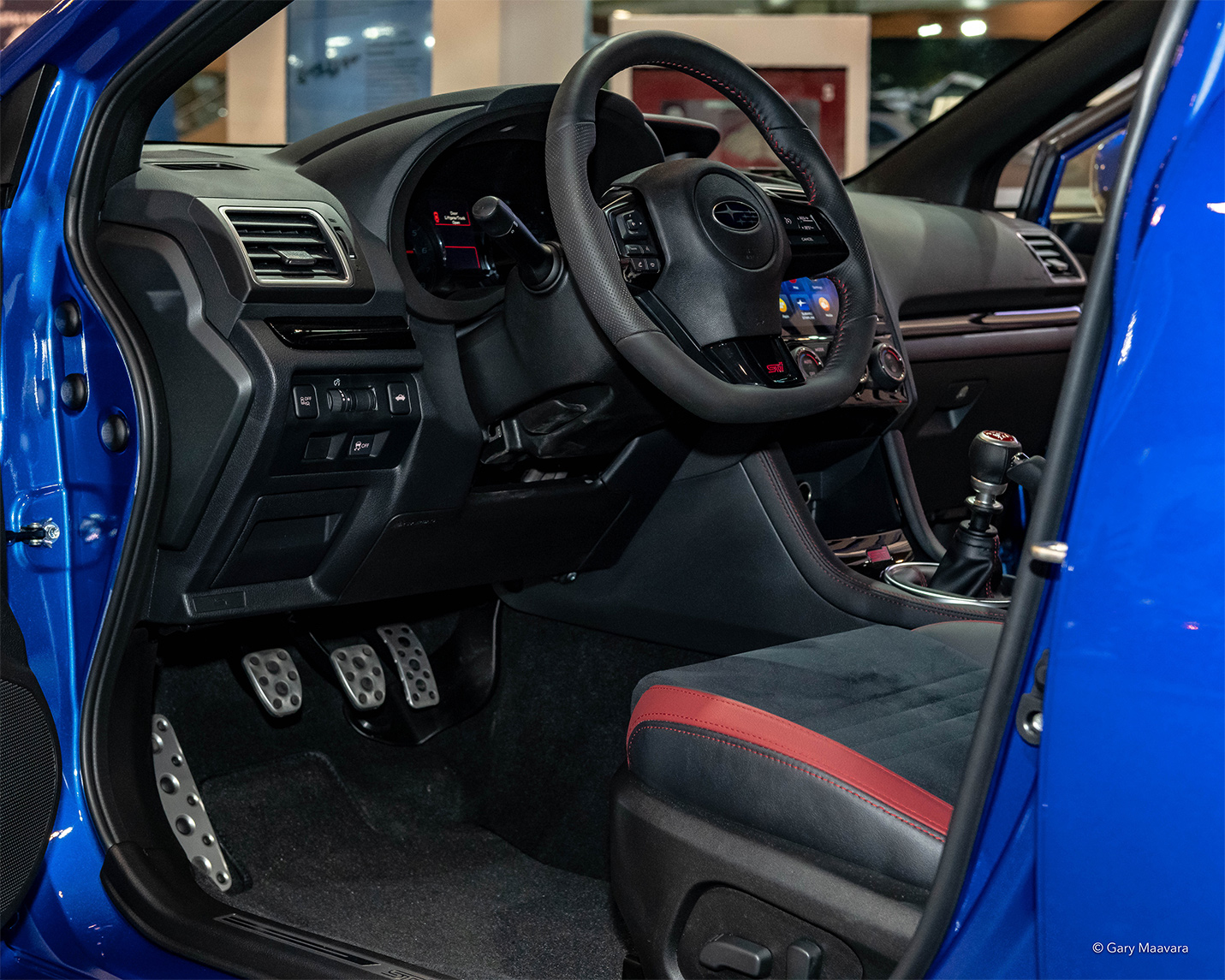 The 2020 Toyota GR Supra made its AutoShow debut and should be on Canadian roads later this year. The all-new Supra marks the return following a 16-year hiatus for the much loved and quite often highly tuned and customized rear wheel drive sports car. The fifth generation Supra is a rear-wheel drive, 2-door, 2-passenger coupe and is powered by a 3.0 litre twin-scroll turbocharged inline 6 cylinder engine. 335 hp and 365 lb-ft of torque will be sent to a quick-shifting 8-speed automatic transmission with paddle shifters. Toyota projects 0-60 mph runs of 4.1 seconds. Top track speed will be electronically limited to 250 km/h. Curb weight is 3,397 lbs. 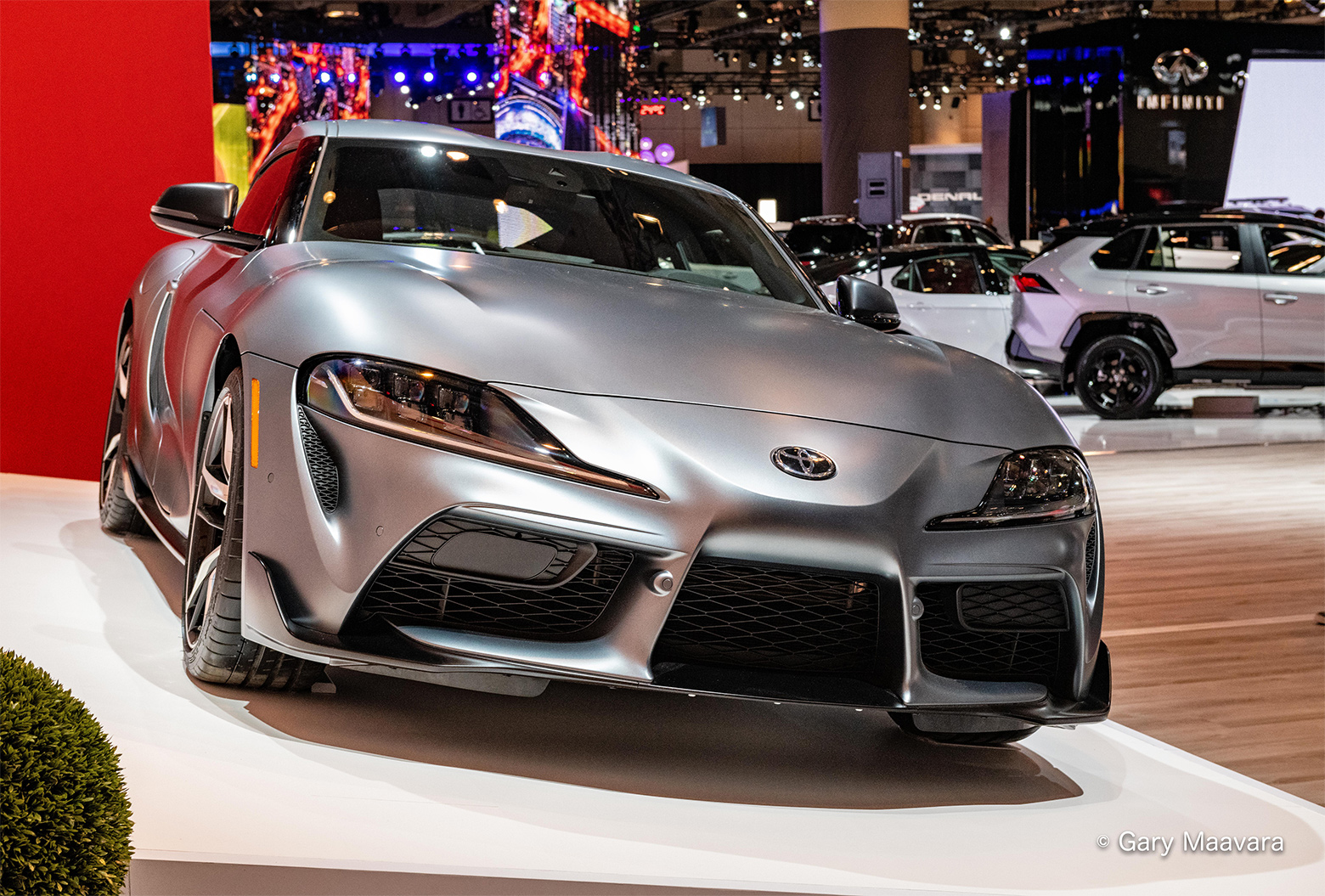 As Cyril Dimitris, Vice-President, Toyota Canada has stated, “The 2020 Toyota Supra is a legend and favourite amongst racing enthusiasts.” 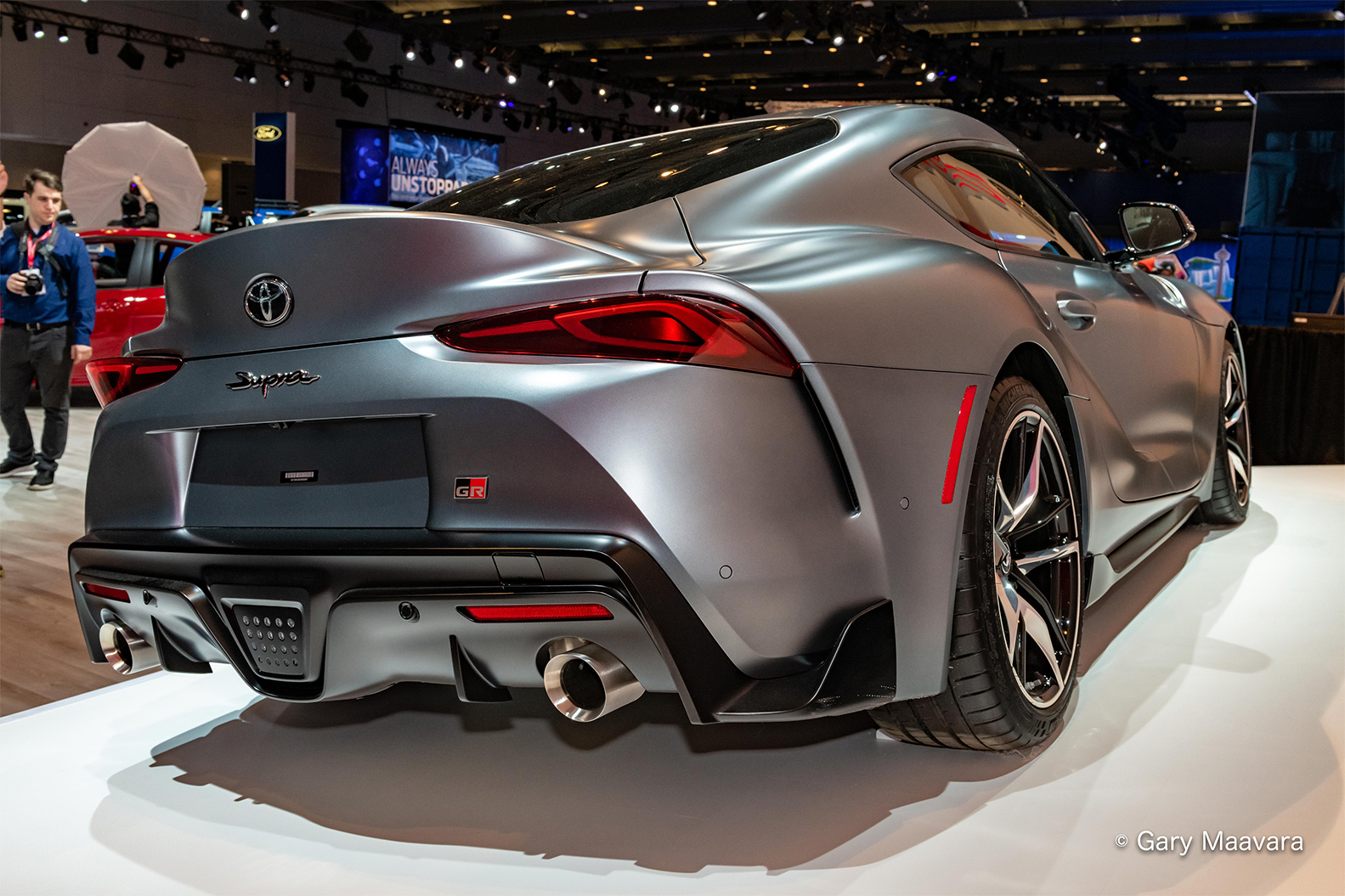 The Supra will come standard with 19-inch forged alloy wheels fitted with 275/35R19 performance Michelin Pilot Super Sport tires in the rear and 255/35R19s up front. Braking will be courtesy of 13.7-inch front rotors held by 4-piston Brembo calipers. Standard on the Supra is Adaptive Variable Suspension. This system instantly adjusts damping force in response to driver input and road conditions. Two settings for the suspension are available – Normal and Sport.

The 2020 GR Supra is the first global model developed by Toyota GAZOO Racing (GR), the international umbrella for Toyota’s global motorsport program and has a base price of $64,990. 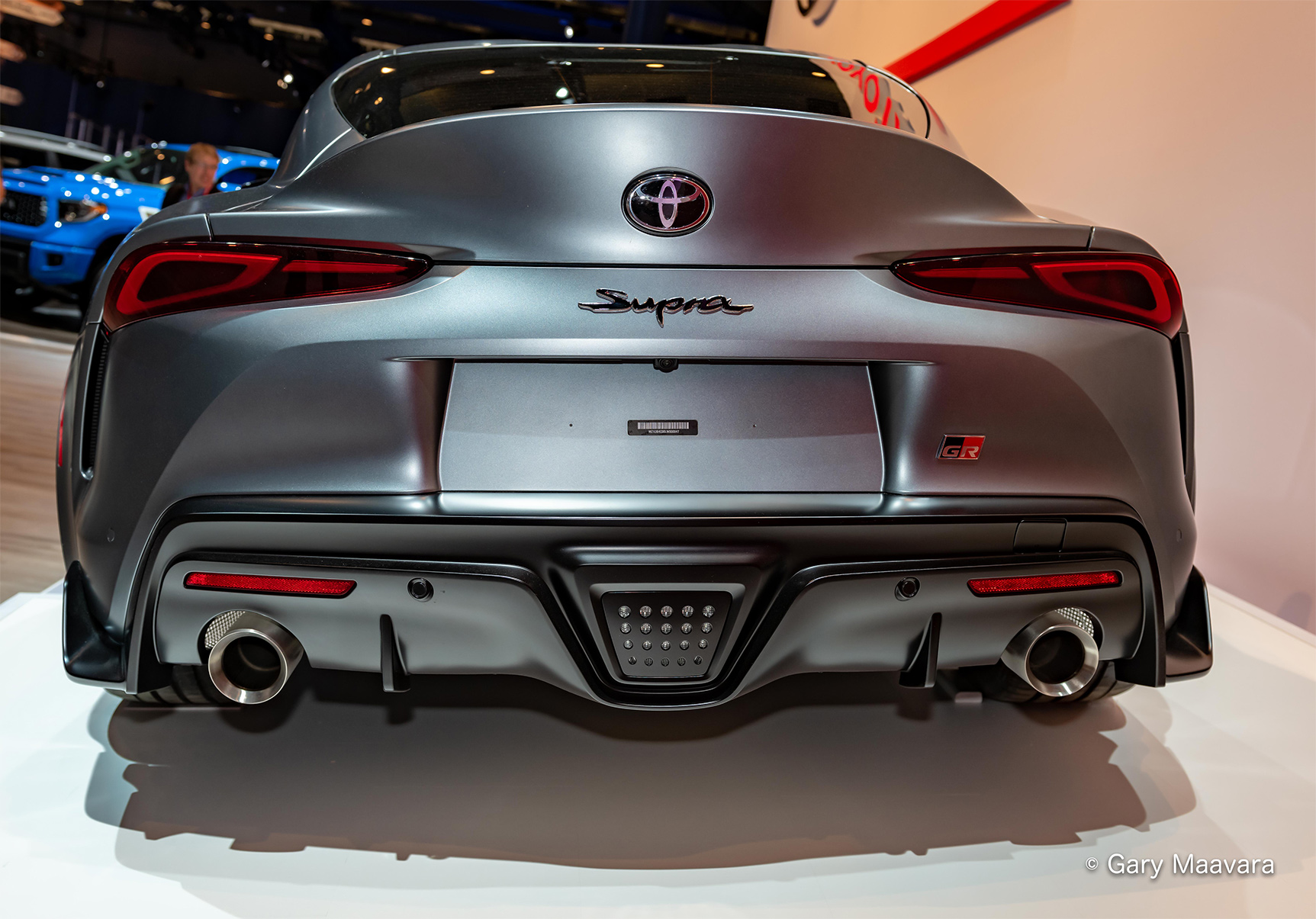 In addition to the I.D. R Pikes Peak all-electric race car, Volkswagen brought two special Golfs to this year’s AutoShow. The Golf R on display is equipped with the $6,500 Oettinger aero package. It includes an Oettinger 4-pipe rear skirt with diffuser, a rear pipe silencer, a roof spoiler, side skirts, a front spoiler and front spoiler splitter. The Golf R is available in forty-six amazing colours, four of which are no-cost options. Oryx White Pearl costs $495, and the remaining 41 extremely vibrant colours are a $2,995 option. Power is sent to all four wheels of the Golf R via Volkswagen’s 4MOTION all-wheel drive through either a 6-speed manual or 7-speed DSG automatic with paddle shifters. 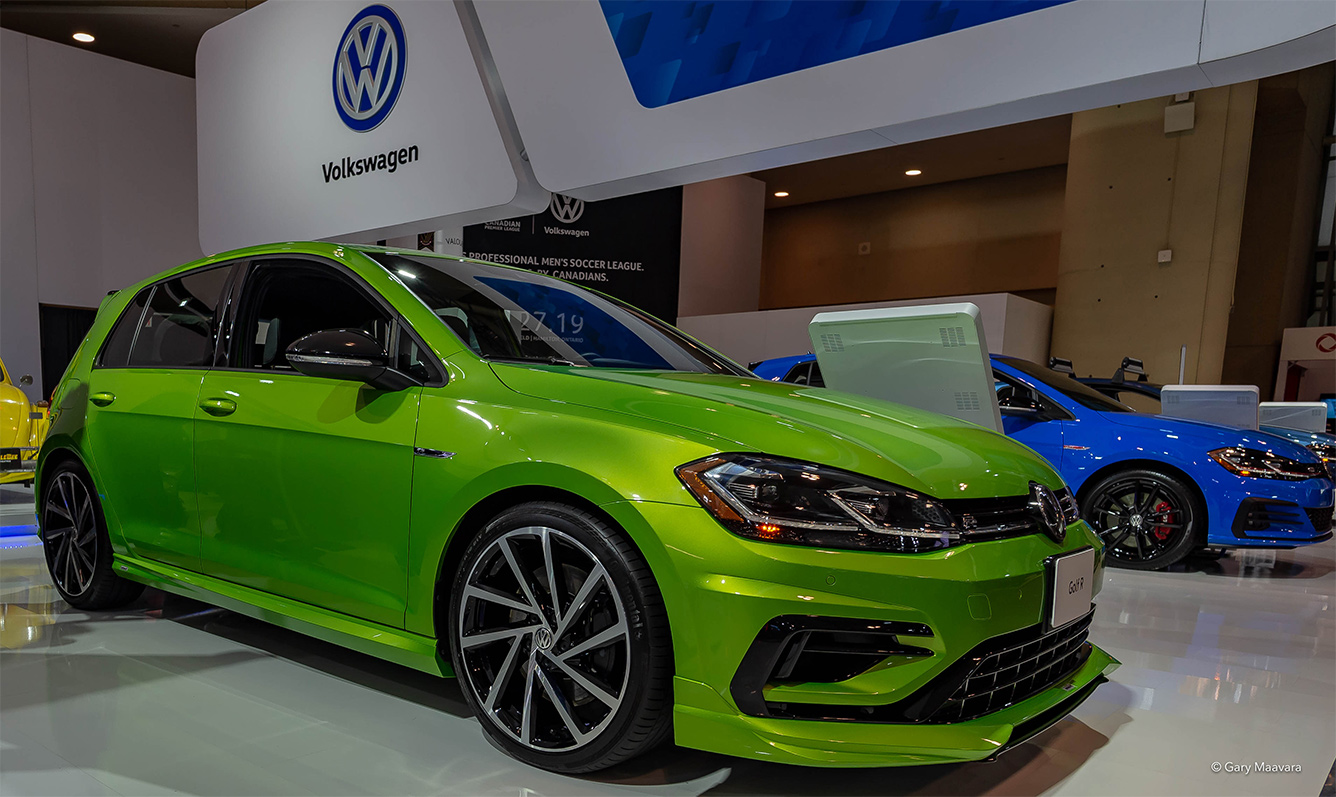 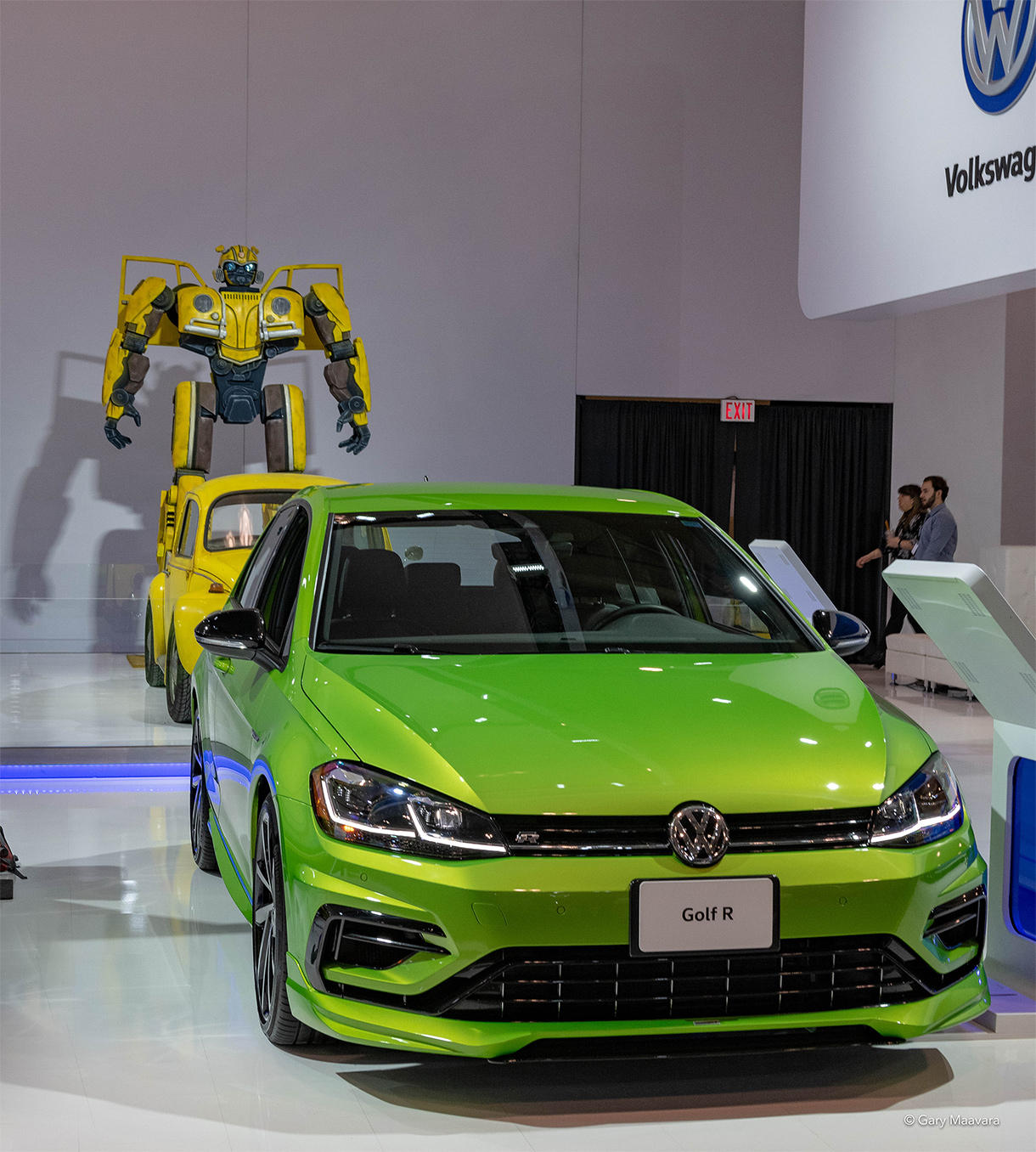 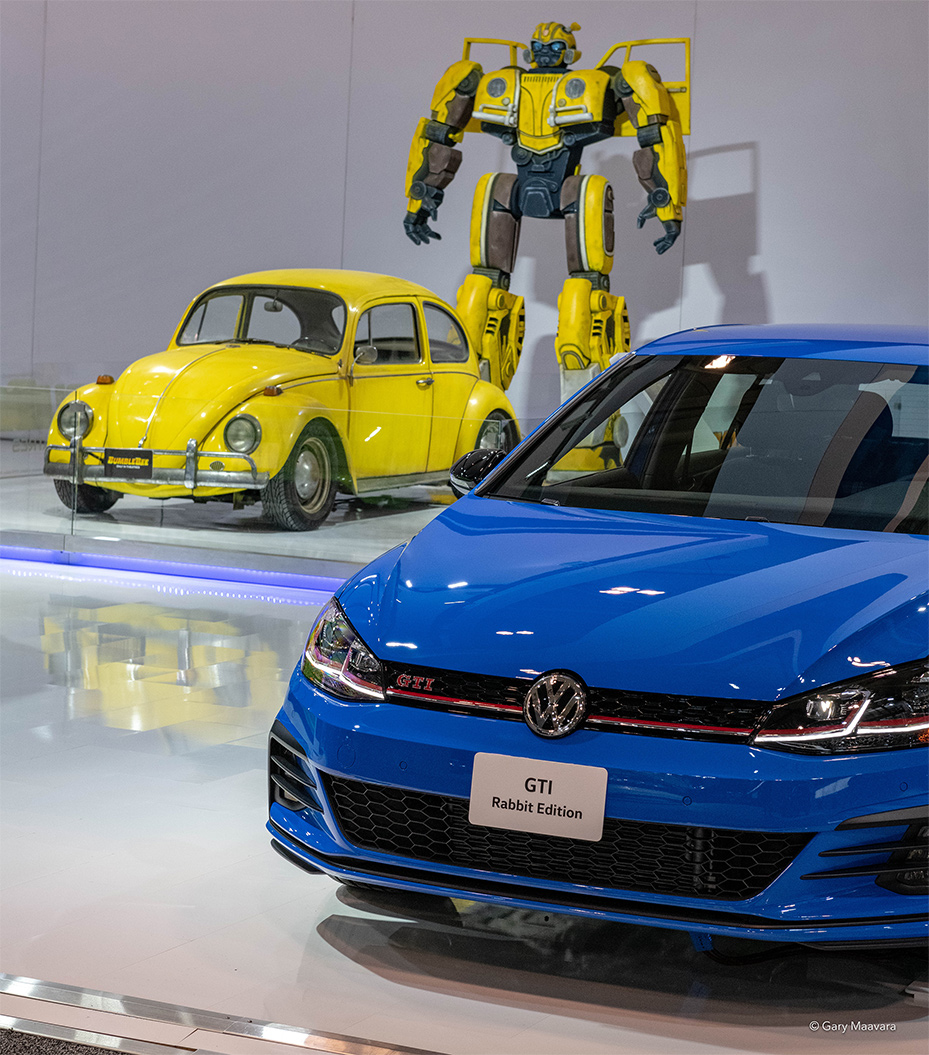