“It was classic Tall Pines weather and tough road conditions, from gravel to mud, snow, ice, slush — everything. It was not easy…”Antoine L’Estage, Team Subaru WRX STI Driver and Canadian Motorsport Hall of Fame Inductee

Subaru Rally Team Canada won this year’s round of the Lincoln Electric Rally of the Tall Pines, which was held last weekend in Bancroft, Ontario. This was the 47th consecutive Rally of the Tall Pines, and the 21st consecutive year that it has taken place in Bancroft, which is about two and a half hours west of Ottawa.
This is the 6th round of the 7 rallies that makes up the 2017 Canadian Rally Championship season, which started in February in Maniwaki, Quebec and ends in December Kelowna, BC. 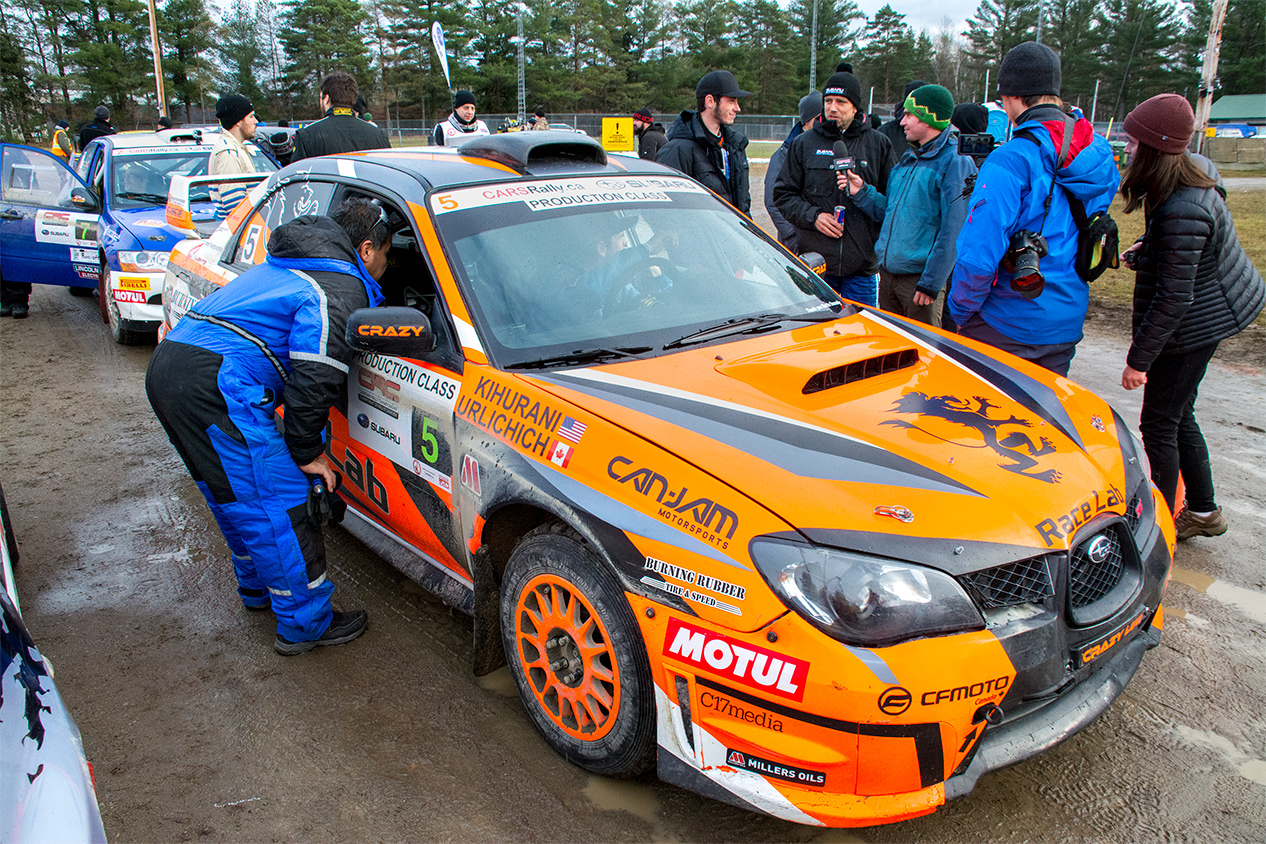 Subaru Rally Team Canada has been competing in the Canadian Rally Championship series since 1992 and has won numerous Open Class and Production Class titles.

“Subaru has been involved with rally racing in Canada since the early 1990s, and it’s just a great complement to our brand,” said Ted Lalka, Vice President, Product Planning and Marketing, Subaru Canada. “Our brand represents so many different things that is unique in the marketplace but reliability, durability and performance are a key part of that, and driving pleasure. This is a great way of demonstrating what our vehicles are capable of doing.” 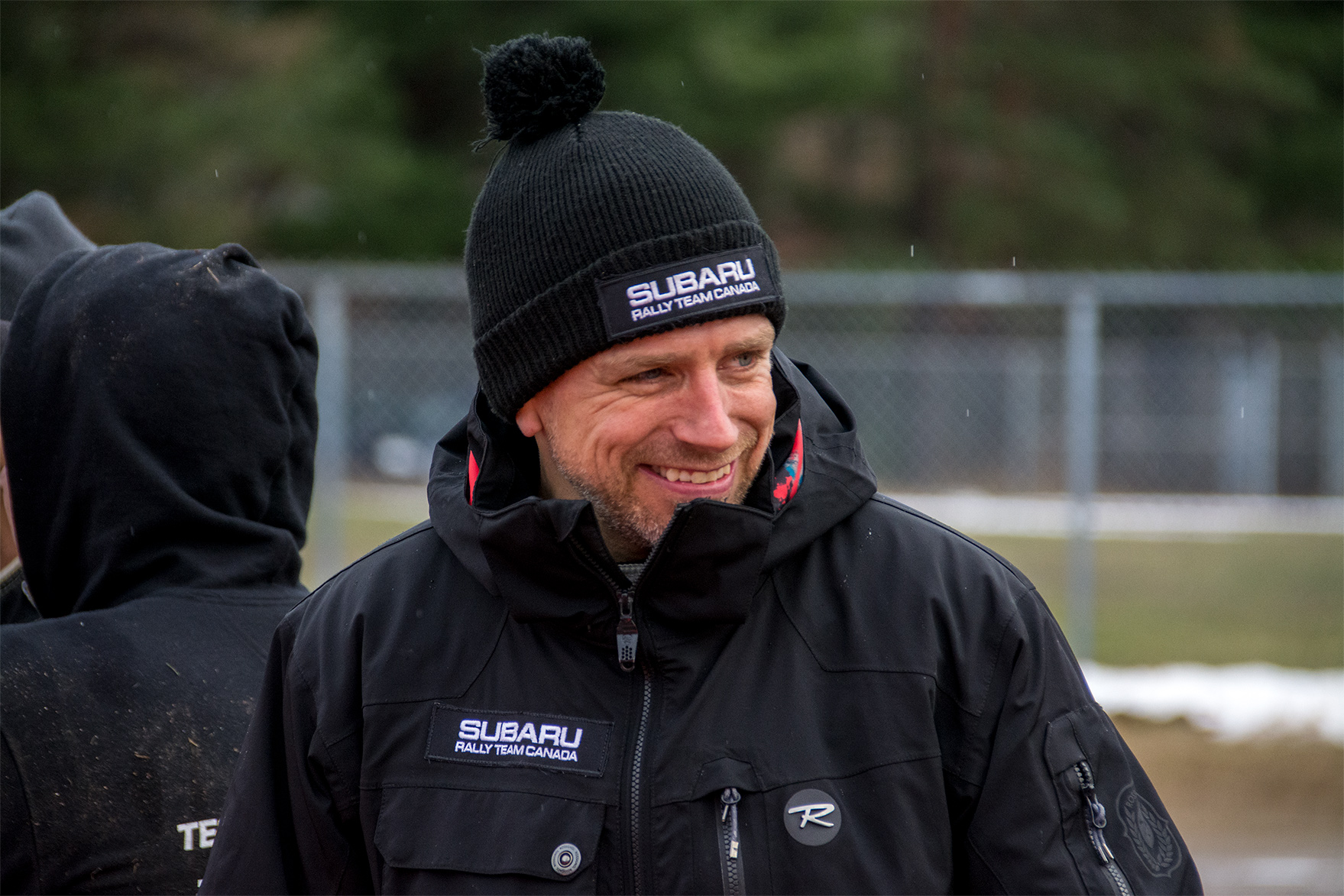 The team’s Subaru WRX STI is driven by Canadian Motorsport Hall of Fame inductee Antoine L’Estage, who has won the Drivers Championship 9 times and is well on his way to his 10th title. His co-driver is Alan Ockwell who is a 4 time Canadian Co-Drivers Champion and about to add a 5th title to his resume.

“There are many Subaru’s competing in this event,” said Lalka. “We find that across the county, simply because performance drivers in these kind of conditions, all weather, all road (conditions), are looking for a vehicle that performs really well and they chose Subaru.” 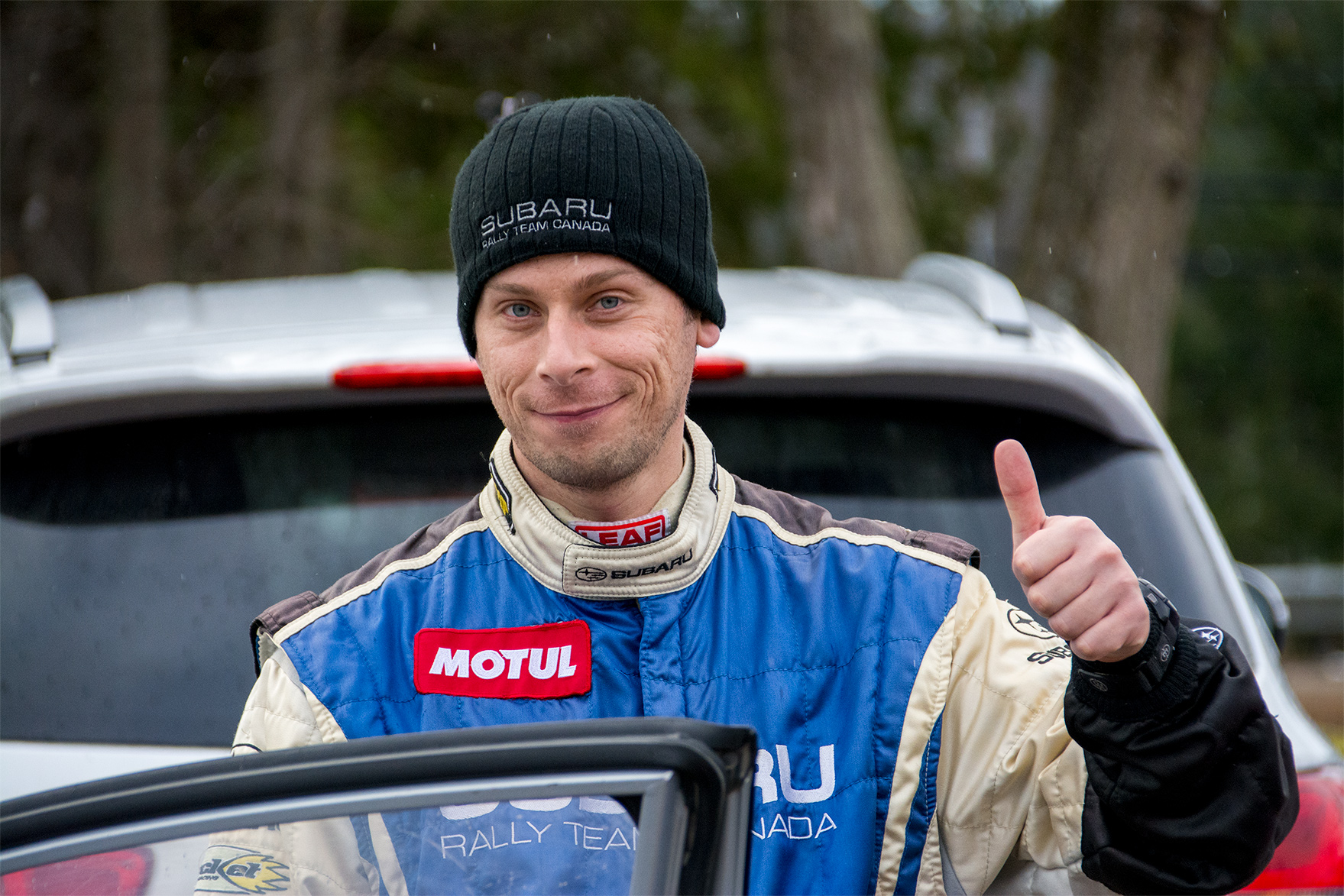 The Rally of the Tall Pines is comprised of 17 Special Stages covering 183 kms for the national competitors and 119 kms for the regional competitors. The teams are allowed to drive the course prior to the race so that they can compile their own pace notes.  The rally runs from roughly 9am to 9pm.

The Canadian Rally Championship was launched in 1957, making it Canada’s longest-running national motorsport series. Subaru Canada began competing in the series in the early 1990s and since 1998 have been a Title Sponsor or Presenting Sponsor.

It is great to see manufacturers who race on Sunday with the goal of selling on Monday. In this case, Subaru races on Saturday, but all one has to do is look at the spectators’ cars at the event to see how many Subaru owners come out to support the Subaru’s taking part in the rally. 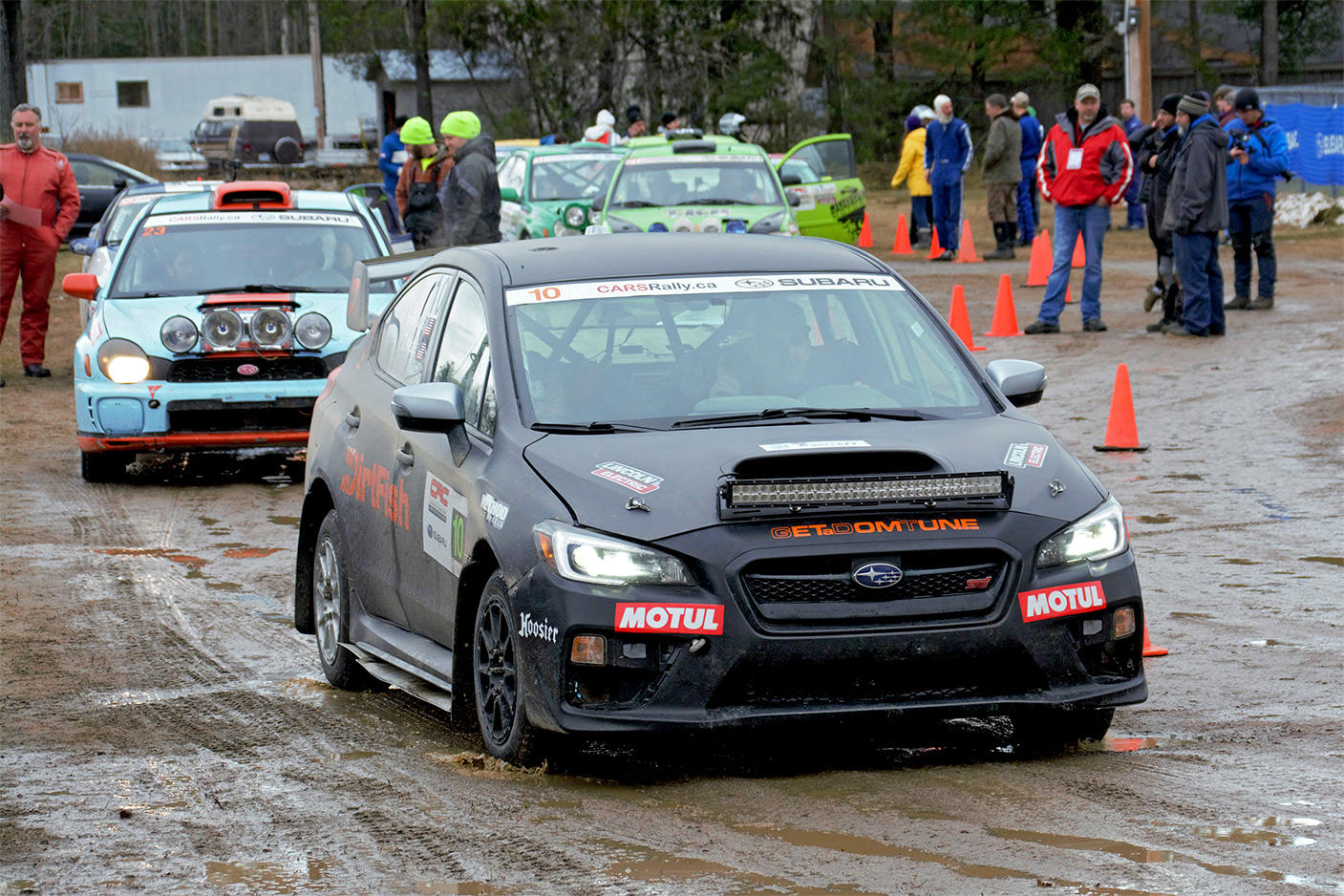 The majority of the field is comprised of various generation of Subaru WRXs and WRX STIs. For this year’s event, 14 of the 25 cars registered are Subaru’s. Also registered were 4 Mitsubishi Lancers as well as a MINI, Mazda 323, Hyundai Accent, Ford Focus, Honda CRX, Eagle Talon and a Dodge Neon. It would be great for spectators and the sport if other manufacturers would get involved in the Canadian Rally Championship series.
Antoine L’Estage and Alan Ockwell ended up winning this year’s rally, extending their respective leads in the driver and co-driver championship standings.
“It was a great team win in a very difficult rally,” L’Estage said. “It was classic Tall Pines weather and tough road conditions, from gravel to mud, snow, ice, slush — everything. It was not easy, but we took the lead early, we picked the right tires and made no mistakes.” 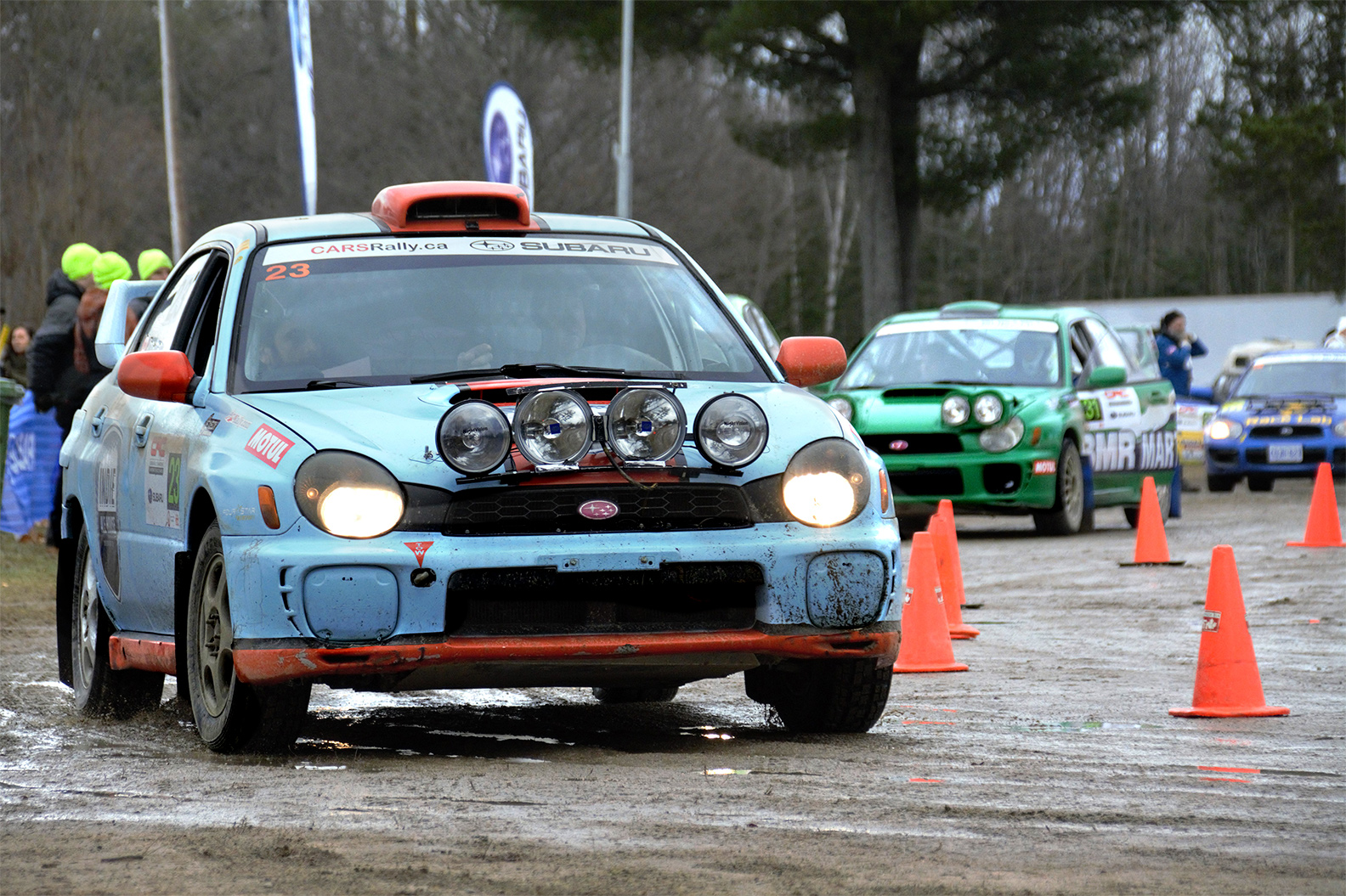 Driving to his fourth consecutive victory after a problem-plagued start to the season, L’Estage only needs to start the season ending Big White Winter Rally to secure the 2017 Driver’s championship. With Ockwell by his side, SRTC will also be looking to capture the Co-Driver’s championship, which would be Ockwell’s fifth.

“After clinching the Manufacturer’s championship at the last rally, this win almost gives Alan and I the championship for 2017,” L’Estage said after the event. “We’ll try to finish on a high at Big White.”