“…I mean, what a race. That was super on the limit at the end, fighting with the BMW. I’m so pleased for all the team. It’s been a really, really great weekend.’’Nick Tandy, No. 911 Porsche GT Team Porsche 911 RSR Driver

The sun, blue skies and huge crowds were out for the sixty-sixth edition of the Mobil 1 Twelve Hours of Sebring Presented by Advance Auto Parts at the Sebring International Raceway in central Florida. Nissan won the overall race with their No. 22 Tequila Patrón ESM Nissan Dpi prototype car. The No. 911 Porsche GT Team Porsche 911 RSR won the GTLM (GT Le Mans) class and the No. 48 Paul Miller Racing Lamborghini Huracan GT3 won in GTD (GT Daytona). 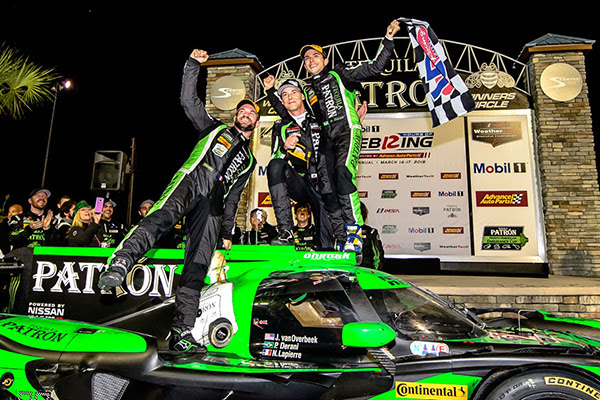 This was Nissan’s first overall win at Sebring since 1994 when the Nissan 300ZX driven by Johnny O’Connell, Steve Millen and John Morton took home top honours. This year, the No. 22 Tequila Patrón ESM Nissan Dpi was driven by Pipo Derani, Nicolas Lapierre and Johannes van Overbeek Derani took over the lead with thirty-nine minutes to go and ended up winning by a margin of 12.4 seconds over the No. 10 Wayne Taylor Racing Cadillac DPi-V.R., the defending race winners.

“We worked the entire weekend to get a car that was really, really strong at night,” said Derani. “We weren’t sure if that was going to be the case because you never know what you get during the race, the weather might change. But we managed that. We had a car that understeered behind another car. It was quick, but on clean air. The car came towards us as the temperature got lower. I was able to overtake (Felipe) Nasr in the end. I could make the maneuver on the slow corner further down the lap. I’m really happy the work came to us over the weekend because it paid off to have a quick car in the end.” 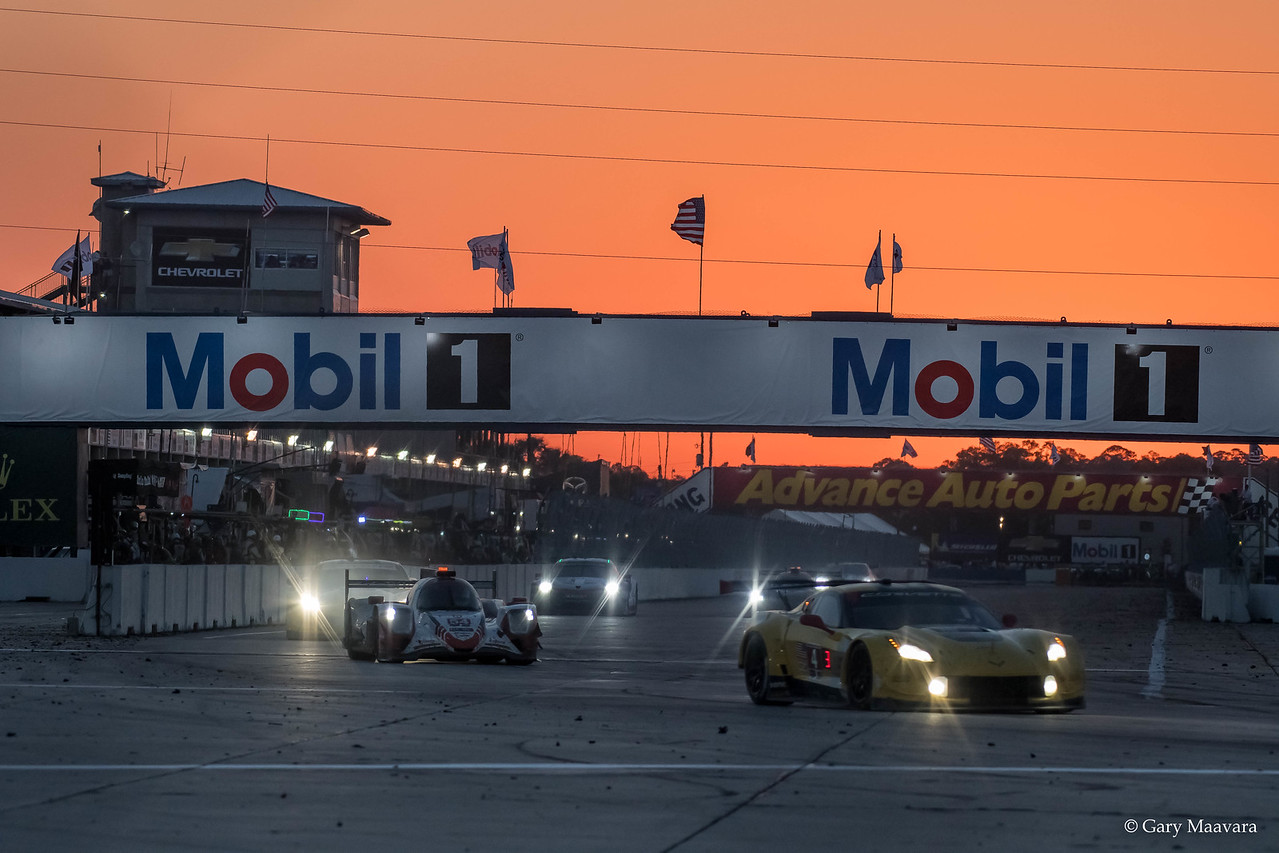 The pole-sitting No. 90 Spirit of Daytona Racing Cadillac Dpi suffered a heavy crash with two hours to go when Tristan Vautier ran wide and into the tire barrier in turn 17.

“It started from the beginning of the out lap – I flat spotted a tire because I was too impatient trying to change a switch on the car,” said Vautier. “When I got to Turn 17, I locked up a bit. I didn’t feel as though I was as wide as I was, but when I realized my left side tires were in the marbles, I tried to get on the gas. But once you’re in the marbles, it’s like ice, and the wall came to me pretty quickly.”

“I feel awesome,’’ said Tandy after he climbed out of the car. “I mean, what a race. That was super on the limit at the end, fighting with the BMW. I’m so pleased for all the team. It’s been a really, really great weekend.’’ 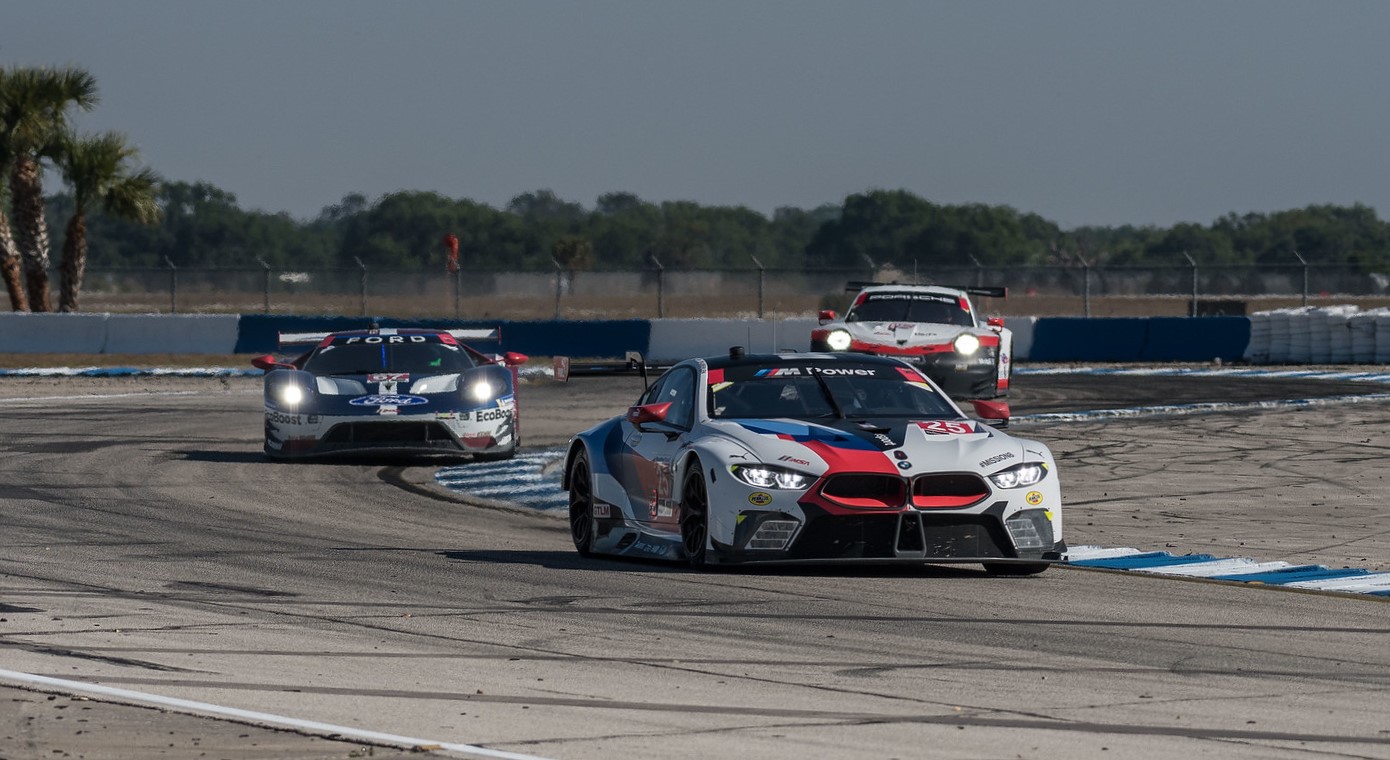 The No. 3 Corvette Racing Chevrolet Corvette C7.R defending GTLM class winner did not have an easy day. The driving team of Antonio Garcia, Jan Magnussen and Mike Rockenfeller ended up finishing eighth in class and thirty-seventh overall. 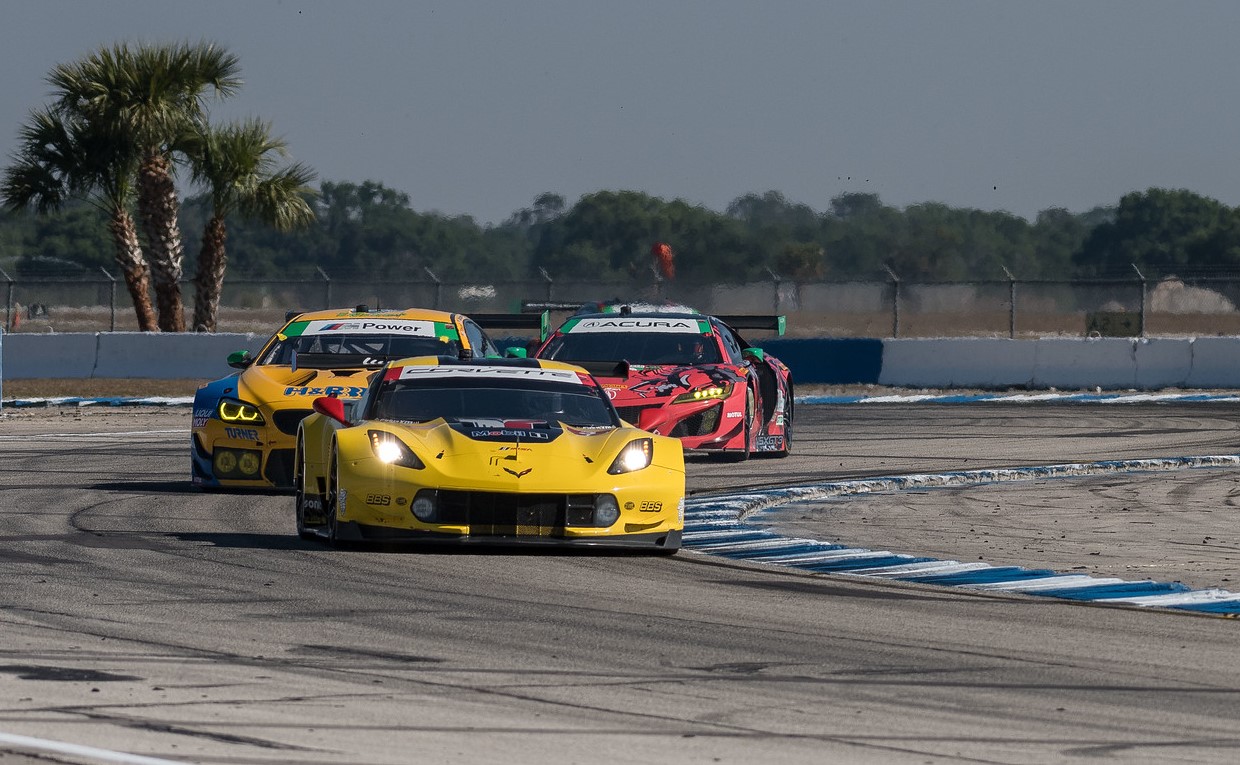 “This is Sebring for you,’’ said Jan Magnussen, who co-drove the Corvette with Garcia and Mike Rockenfeller. “When things are great around here, man they are so great. But when they are like they are today, boy is it a long day.”

The Ford Chip Ganassi Racing Ford GTs that finished first and second in GTLM at the Rolex 24 at Daytona in January did not feel any luck of the Irish on this Saint Patrick’s Day. The No. 67 Ford GT driven by Ryan Briscoe, Richard Westbrook and Scott Dixon finished fourth in class and the No. 66 Ford GT driven by Joey Hand, Dirk Mueller and Sebastien Bourdais finished ninth in class. The two GTs touched briefly as they exited their pit stalls less than two hours into the race. 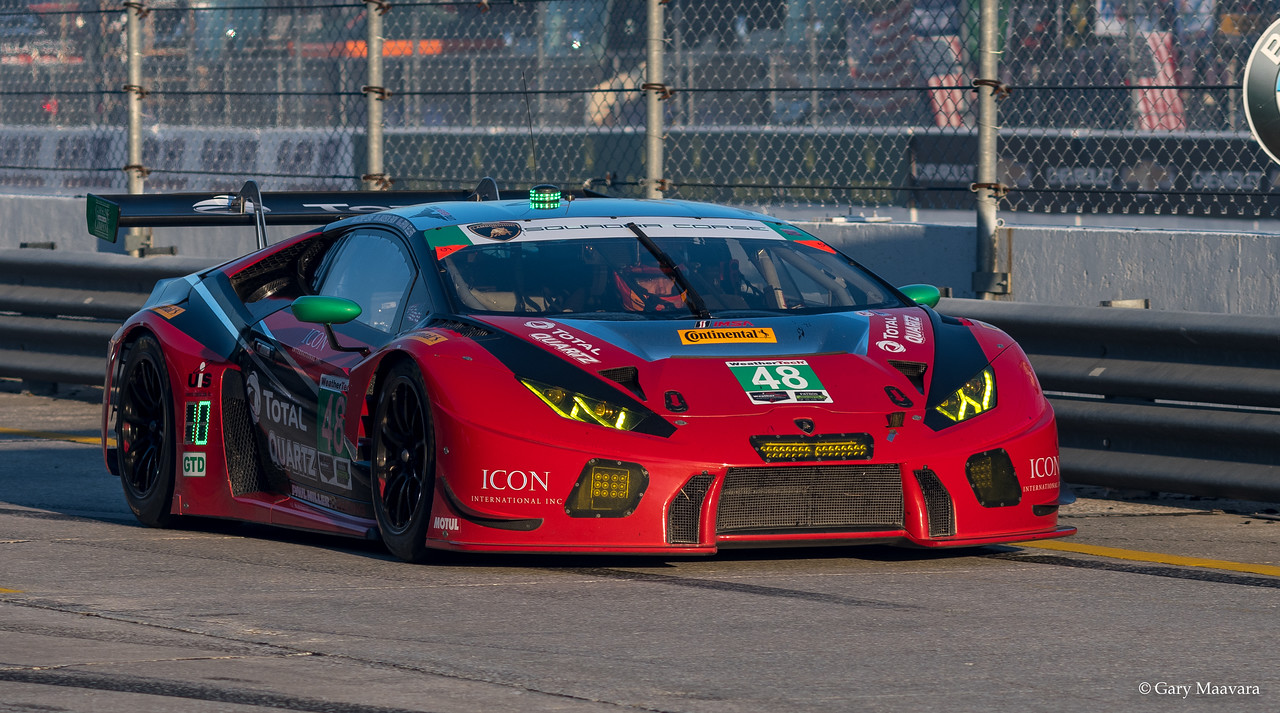 Bryan Sellers took over from Madison Snow with less than an hour to go and claimed the second straight GTD class win for Lamborghini.

“In the end, the car was great,” said Sellers. “It’s just that, for the first time, I think I’m kind of at a loss for words. This is a huge race, and this is the 20th anniversary of the first time I came here with my dad and stood up in Turn 3 and watched the cars go around. I remember him looking at me and saying, ‘If one day you can do this race, that’d be pretty amazing.’ Here we are 20 years later.

“It’s difficult to know whether you want to be in the car at the end, or if you want to be out on the timing stand watching someone else be in at the end,” said Snow. “No matter what, it was nerve-wracking. (This is my) first time on the 12-hour podium, so I’m glad to be on the top step. This is huge. After finishing Daytona in third place and now coming here getting in first place, we honestly couldn’t be off to a better start for this championship.”

Full race results and details can be found at the IMSA website. The next round of the WeatherTech SportsCar Championship takes place on the streets of Long Beach, California, April 13-14 for the BUBBA burger Sports Car Grand Prix at Long Beach. 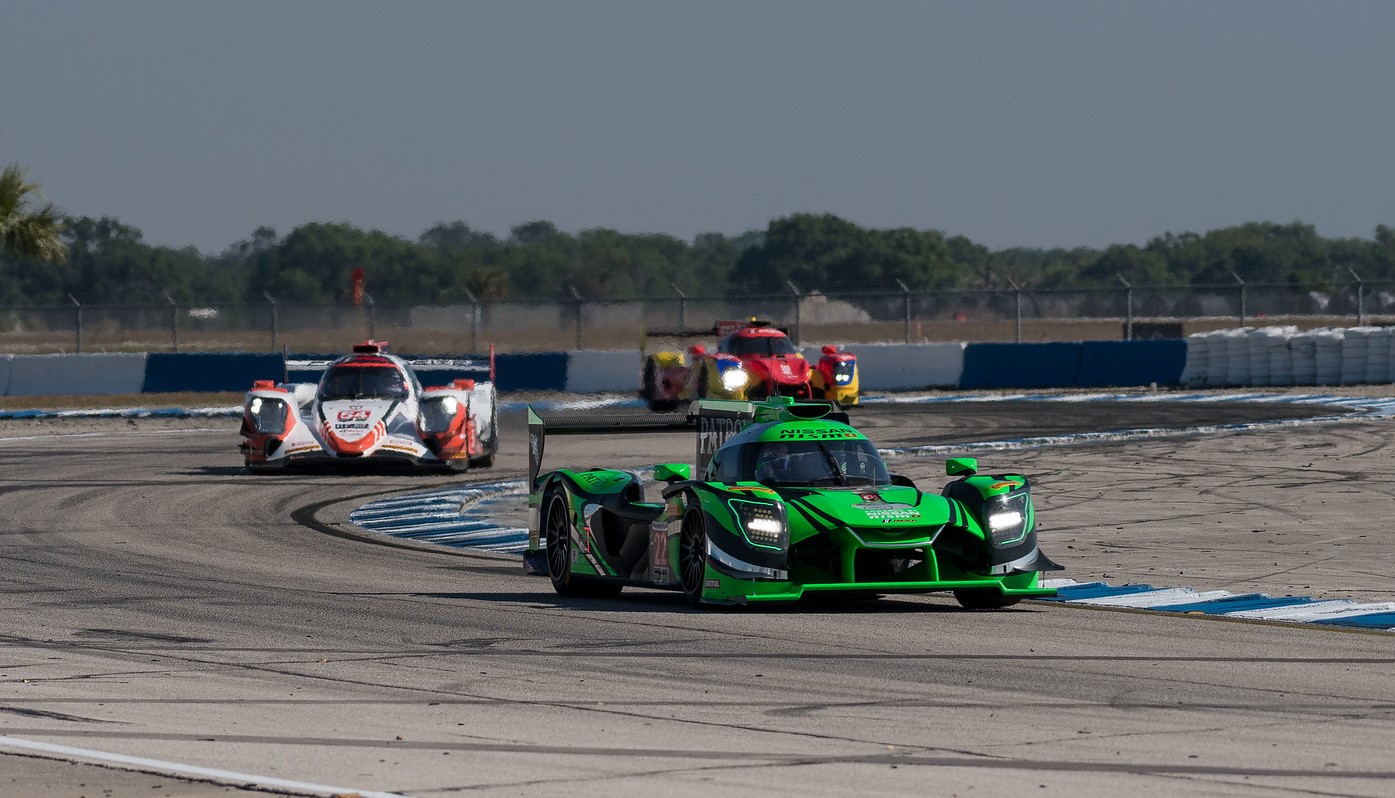