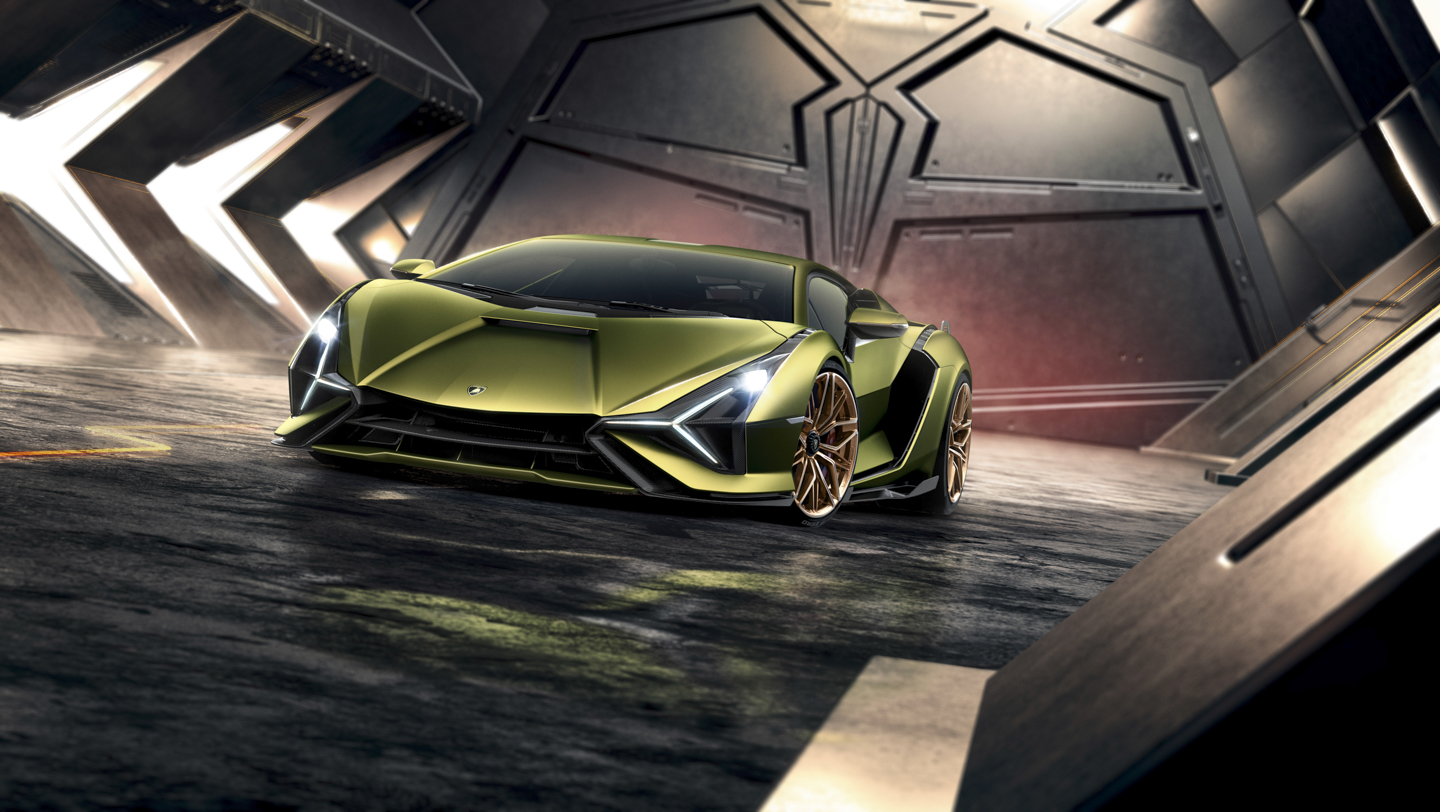 The Lamborghini Sian is the first car to be fitted with a supercapacitor in its hybrid drivetrain. The result is a combined thermal and electric power of 819 hp making it the most powerful Lamborghini ever produced. It has the lowest weight-to-power ratio of any V12 Lamborghini ever and can accelerate from 0-100 km/h in under 2.8 seconds. It has a top speed of more than 350 km/h.

“The Sián is a masterpiece in possibilities,” says Stefano Domenicali, Automobili Lamborghini Chairman and Chief Executive Officer. “Not only does the Sián deliver a formidable hyper-car design and engineering tour de force today, it augments the potential for Lamborghini as a super sports car brand for tomorrow and for decades to come, even as hybridization becomes more desirable and inevitably essential. The Lamborghini Sián represents the first step in Lamborghini’s route to electrification, and expedites our next-generation V12 engine. Its Sián moniker, meaning ‘flash or lightning’ in Bolognese dialect, denotes the first electrification of a Lamborghini production car and confirms our strong connection to the territory in which we operate. With the Sián, Automobili Lamborghini demonstrates its dynastic strength as a legendary super sports car brand for the future.” 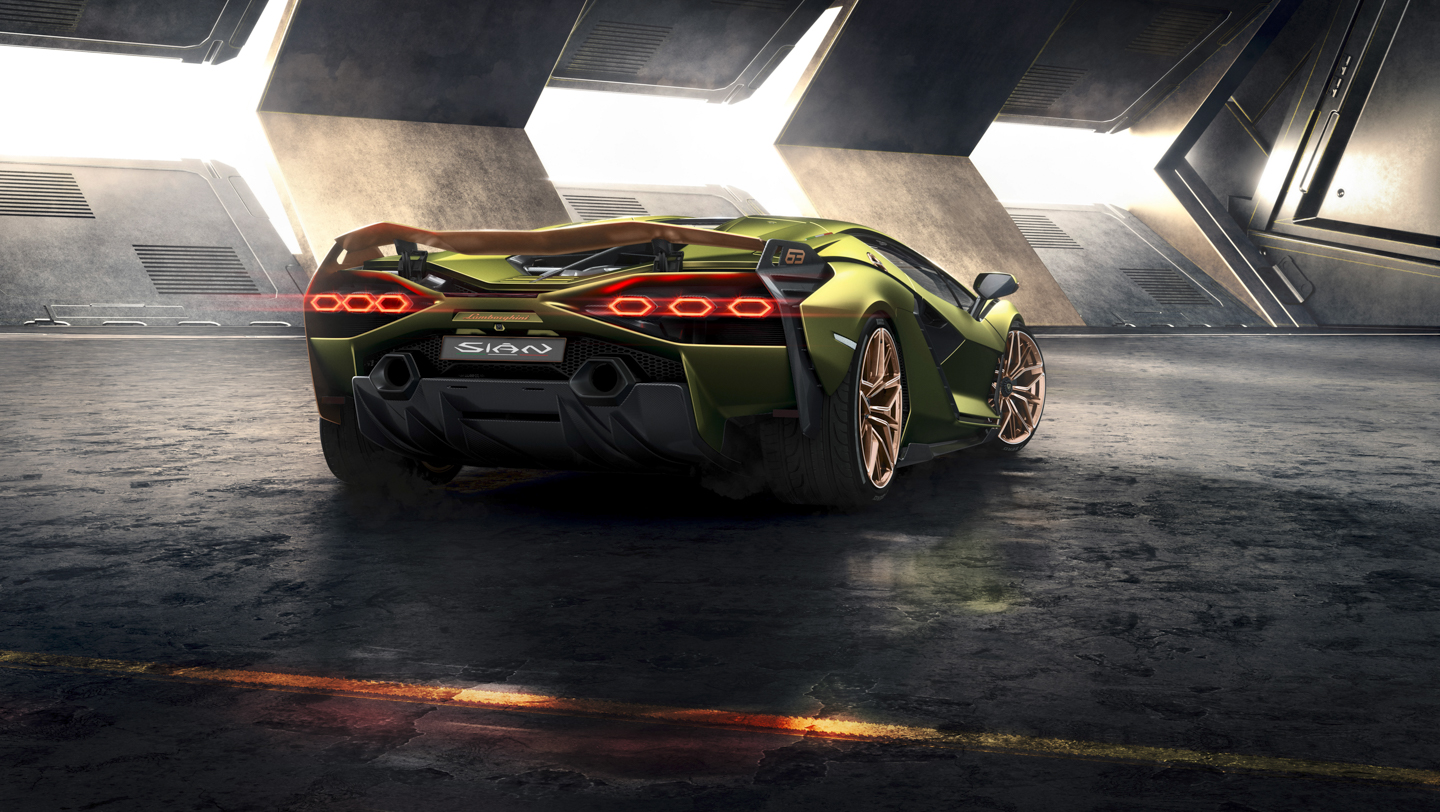 Just 63 Sians will be built, a reference to the year of the company’s founding in 1963. All 63 units have already been sold. The car will be unveiled to the public at the Frankfurt Motor Show September 12-22.

“Lamborghini’s strategic heritage in one-off and very limited series cars is not only a commitment to exclusivity but a presentation of future designs and technologies. With this car, we set ourselves the challenge of creating the best hybrid solution for a Lamborghini super sports car to provide us with the first step on our electrification strategy,” says Maurizio Reggiani, Chief Technical Officer. “Lamborghini is inherently a rule breaker, a challenger, always pushing what is possible to find a better solution. With the Sián we are defining our route to innovation and we are setting new rules in new technologies, instead of just following existing solutions. The result is the Lamborghini Sián, which includes the world-first application of a supercapacitor for hybridization and new materials technology.” A 48 volt 34 hp e-motor has been incorporated into the gearbox to provide immediate response and improved performance. This is the first time in any low-voltage hybrid that a direct connection has been made between electric motor and wheels. The e-motor also helps with low-speed maneuvers such as reversing and parking with electric power. 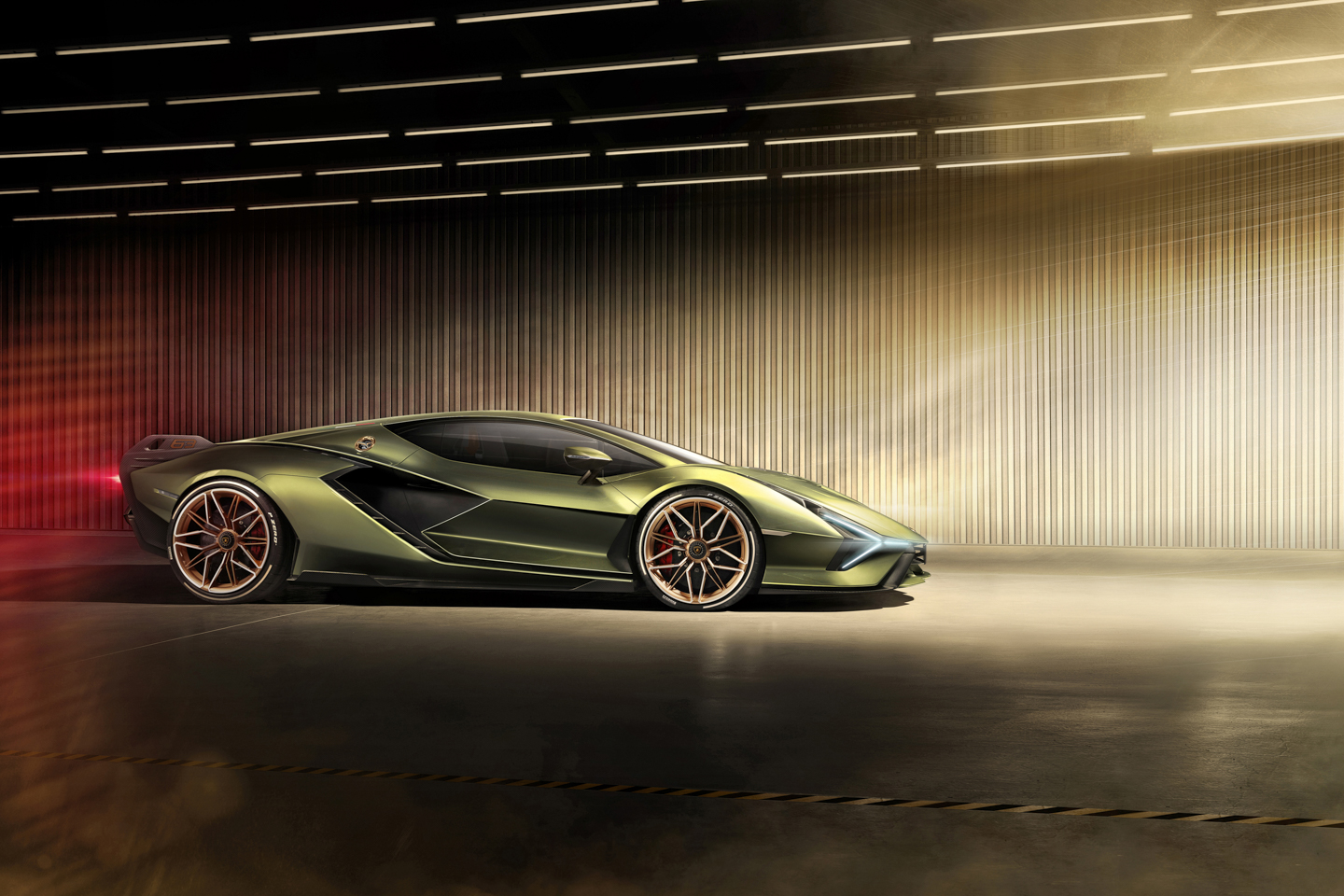 The energy accumulation technology is a world first. Rather than a lithium-ion battery the Sián innovates supercapacitor application: a technology pioneered originally in the Lamborghini Aventador but has been developed to store ten times the power. It is three times more powerful than a battery of the same weight and three times lighter than a battery producing the same power. Located in the bulkhead between cockpit and engine it provides better weight distribution. The electric system with the supercapacitor and e-motor weighs only 34 kg. It delivers a weight-to-power ratio of 1.0 kg/hp. Symmetric power flow ensures the same efficiency in both charging and discharging cycles. 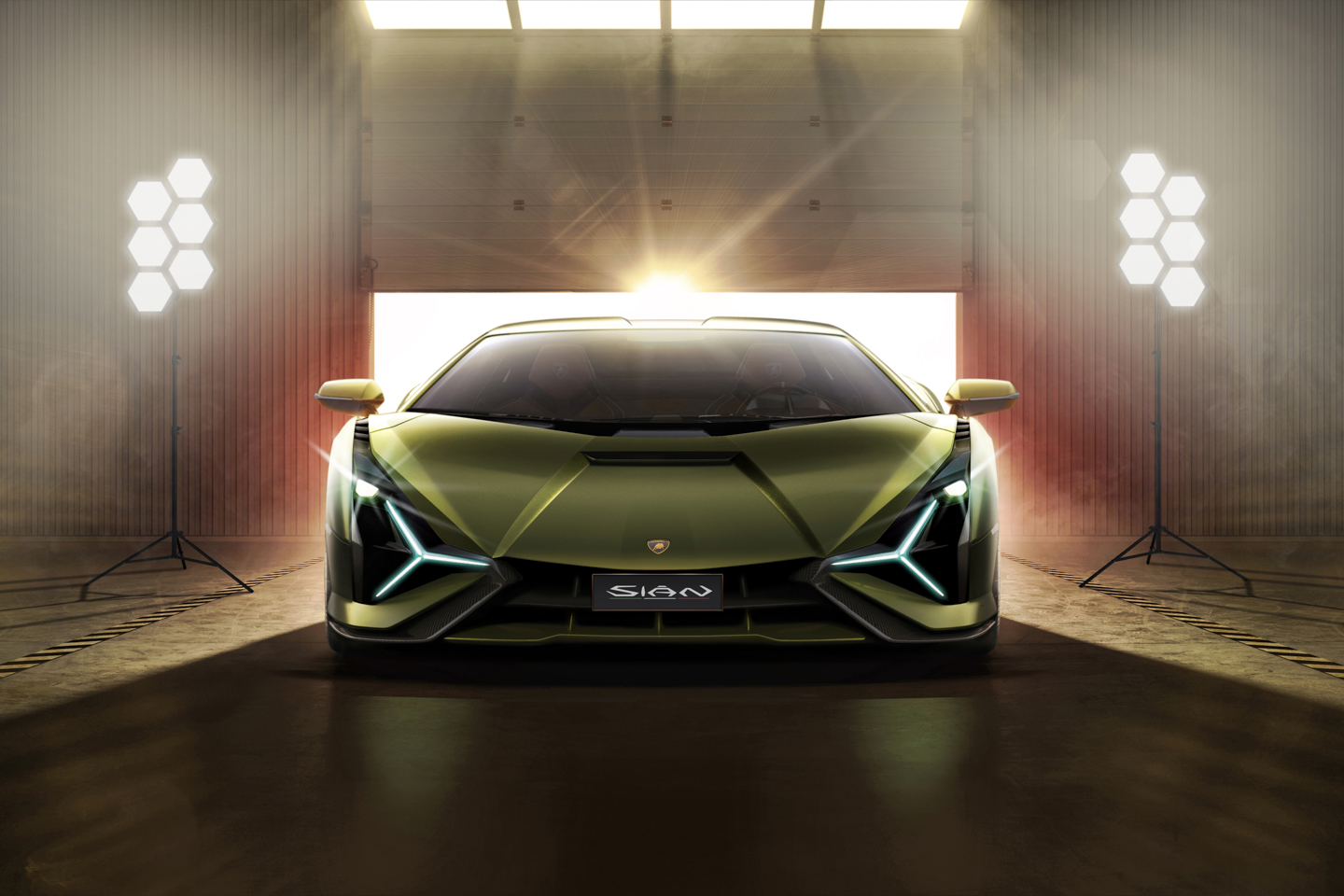 This advanced technology combines with the V12 engine, which incorporates titanium intake valves and is uprated to 785 hp at 8,500 rpm: the highest output ever from a Lamborghini power plant. Combined with the additional 34 hp from the hybrid system, the Sián delivers a total of 819 hp. The Sián’s weight-to-power ratio is better than that of the Aventador SVJ, achieved through extensive use of lightweight materials.

The Lamborghini Sián incorporates a highly advanced regenerative braking system, especially developed by Lamborghini. Unlike lithium ion batteries, the supercapacitor can be charged and discharged with the same power. The Sián’s energy storage system is fully charged every time the vehicle brakes. The energy stored is an instantly-available power boost, allowing the driver to draw immediately on increased torque when accelerating away, up to 130 km/h when the e-motor automatically disconnects, improving the elasticity maneuvers and making it more than 10% faster than a car without this system. 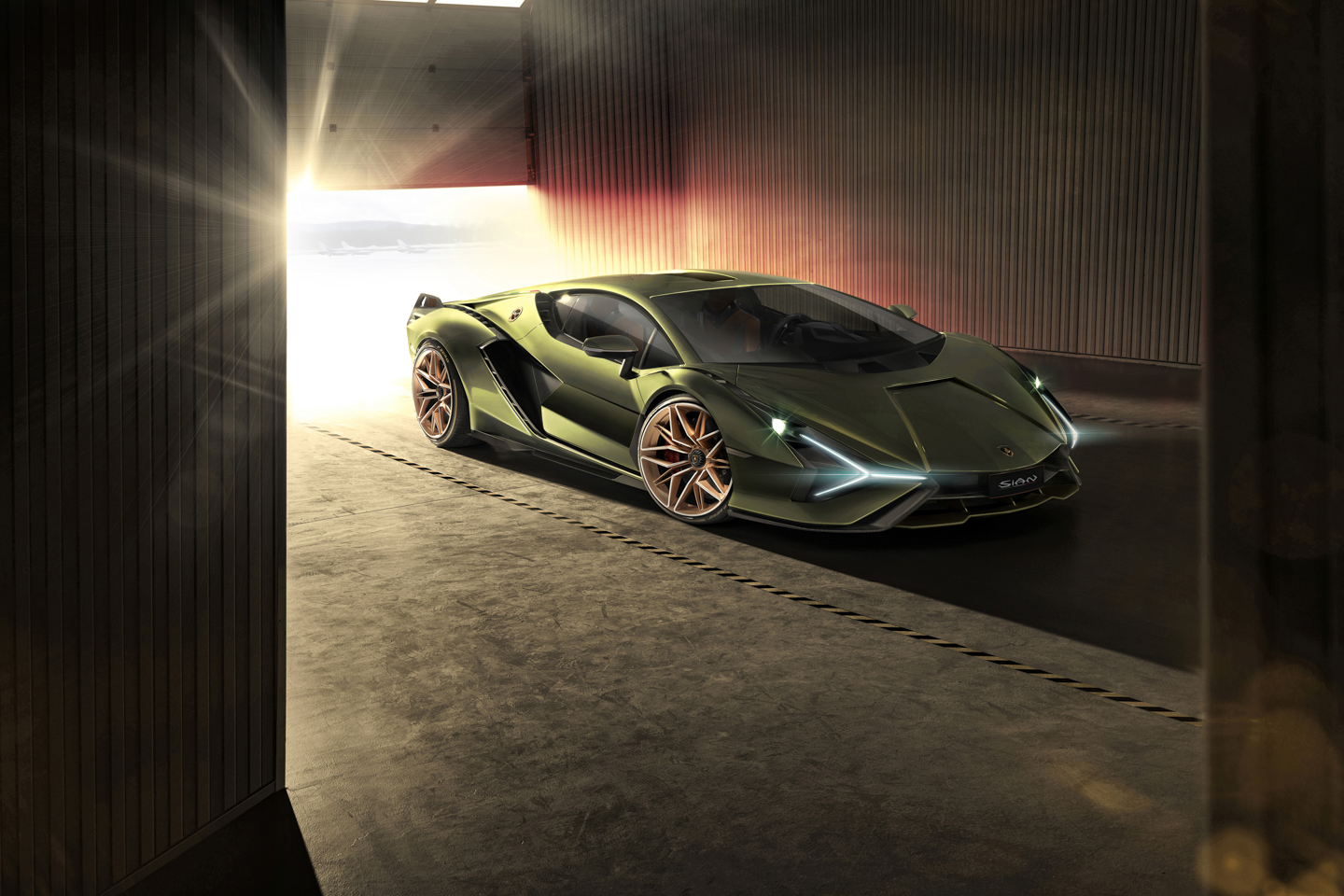 The innovative system also delivers instant acceleration in low gears, with improved traction force provided by the combination of V12 engine and hybrid system. This makes the Sián the fastest-accelerating Lamborghini ever, achieving 0 to 100 km/h in less than 2.8 seconds. The improvement in elasticity maneuvers is even more evident. Traction force is improved by up to 10% in third gear and the 30 to 60 km/h acceleration time is improved by 0.2 seconds compared to the Aventador SVJ. In higher gears and lower speeds the electric motor increases traction force by up to 20%, reducing the 70 to 120 km/h acceleration by 1.2 seconds compared to the Aventador SVJ. 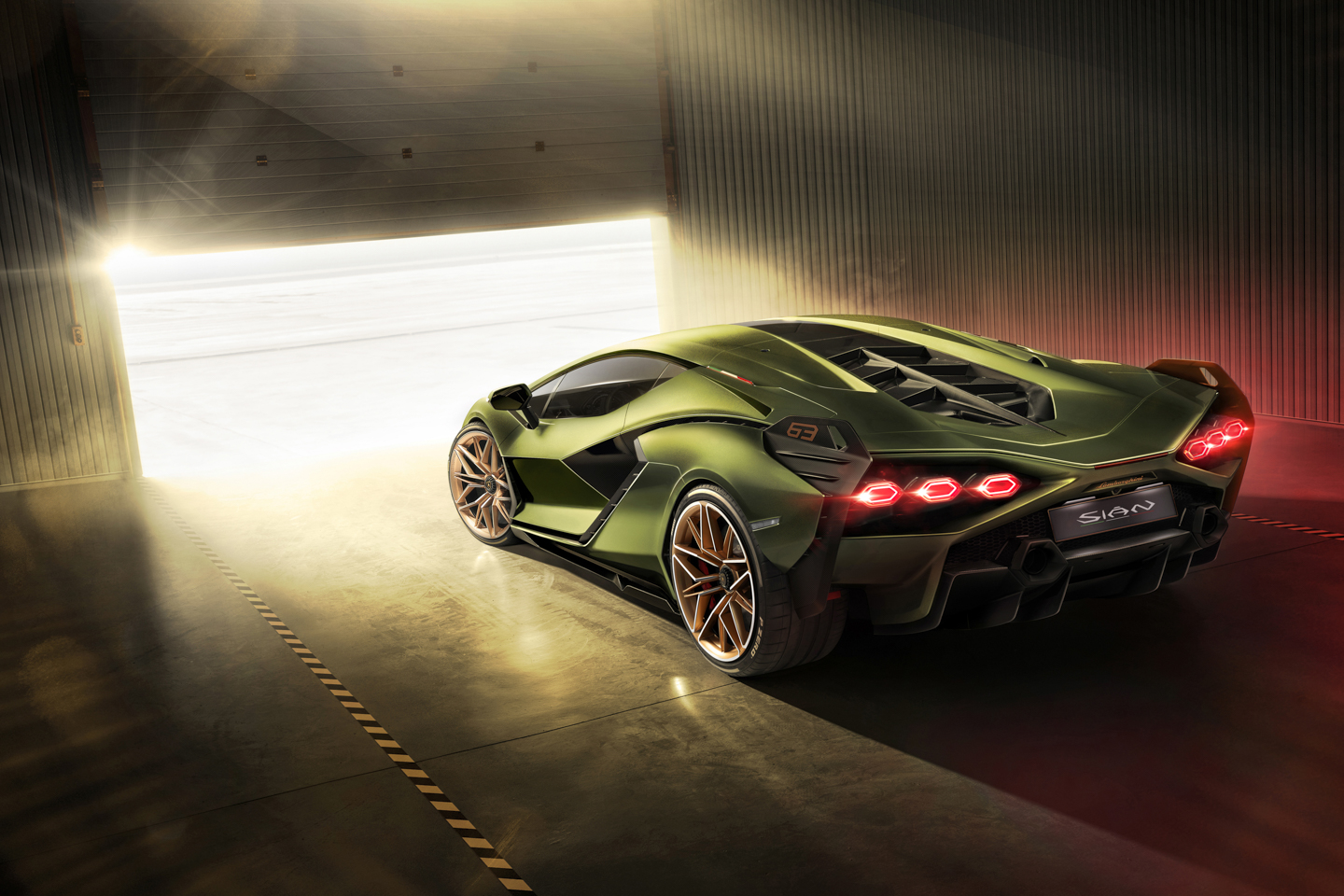 “The fastest Lamborghini must be a visual and symphonic feast, as remarkable to those who see it pass by as those privileged to drive it, “says Mitja Borkert, Head of Design at Automobili Lamborghini. “It takes inspiration from the Countach, but the Sián is a futuristic icon, not retrospective. Exclusivity is enhanced by total Ad Personam personalization that every one of the 63 Sián owners has the privilege of creating, in conjunction with me and the Centro Stile team: 63 individuals worldwide will own not only the fastest, but a unique Lamborghini.”