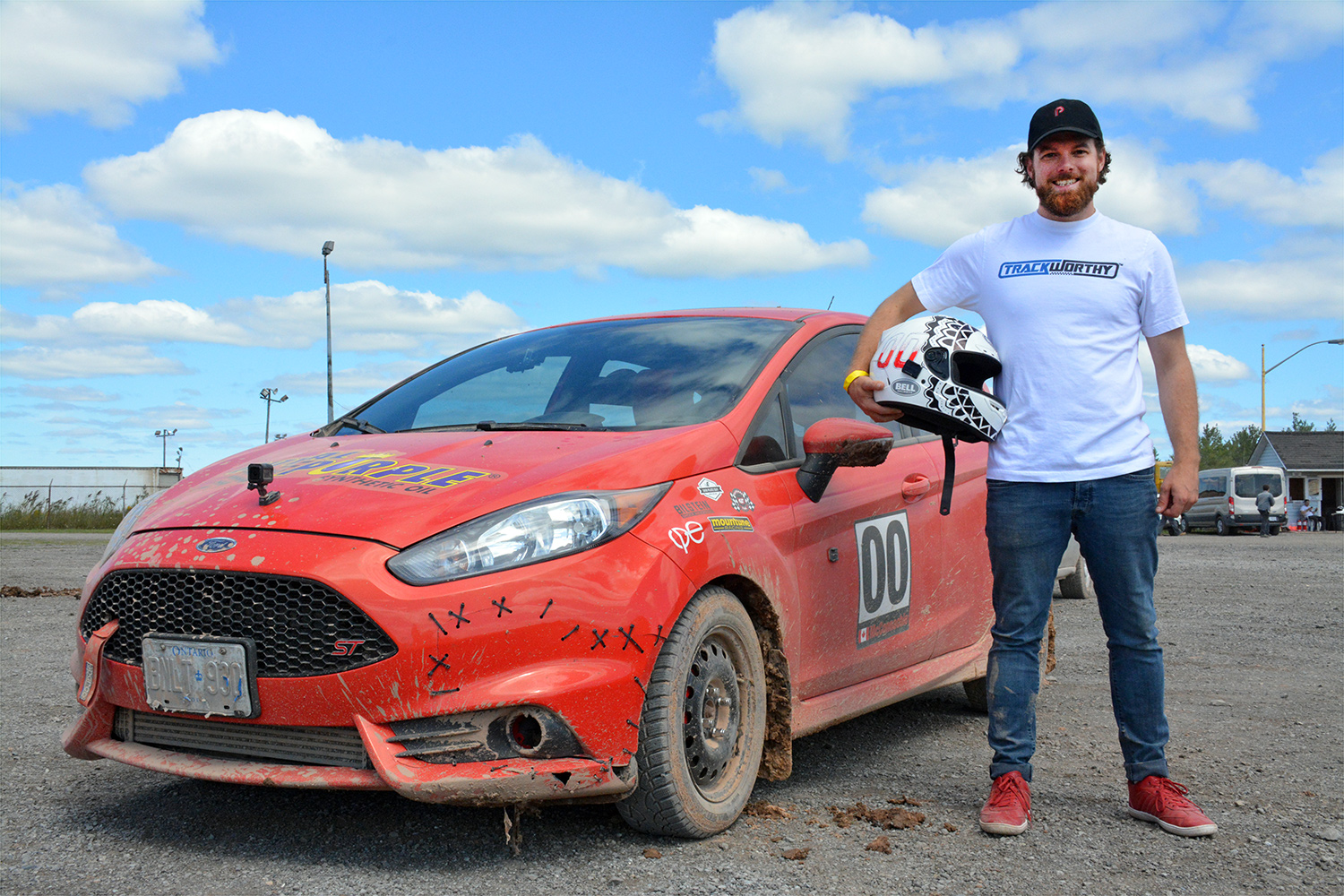 “Never has going so slowly in a Ford Fiesta ever felt so fast and so much fun!”Michael Taylor, Co-founder, TrackWorthy Group Ltd.

For most car enthusiasts, driving on a race track is considered to be the ultimate expression of automotive passion: it provides the opportunity to drive a sports car as it is meant to be driven, at speeds well above the legal limits (at least in this country); and it highlights a sports car’s extreme acceleration, breaking and cornering capabilities. This usually requires high speed, which, unfortunately, comes with high risk of unfavorable consequences should the driver’s enthusiasm exceed his ability. But in the world of grassroots Rallycross racing, the thresholds of acceleration, breaking and cornering come at much slower speeds, at a much lower cost, and possibly at even higher levels of fun.
I was fortunate to be invited to drive a rallycross car on a rally course and experience this for the first time, first hand. Never has going so slowly in a Ford Fiesta ever felt so fast and so much fun. The main objective of rallycross racing is to get the car around the course on a single timed lap as quickly as possible. Where the high fun factor comes in is that, if you are doing this with any kind of speed, you are going sideways most of the time.

We experienced rallycross racing thanks to the generosity of the Kitchener Waterloo Rally Club (“KWRC”) and Sean McConnachie with his 2014 Ford Fiesta ST. We spent the day at the New Humberstone Speedway, located about 30 kms west of Buffalo, NY in Port Colborne, Ontario. New Humberstone Speedway is a family owned, three-eighth’s mile, clay, oval race track; but, for rallycross purposes, the race track only forms a minority of the race course.

The KWRC is an automobile rally club sanctioned by RallySport Ontario (RSO) and the Canadian Association of Rallysport (CARS). For 2017, their rallycross series is comprised of five events at the Humberstone track.

KWRC race organizers set up the course Each driver races against the clock to set the lowest overall time on a single lap of the course, which KWRC race organizers set up. The course takes the drivers on and off the track on surfaces that include dirt, clay and mud; it stretches through a field, around many pylons and other stationary objects, and concludes at the finish box on the dirt oval. On most race weekends, drivers set their lap times in three morning sessions and three afternoon sessions for a total of six timed runs. 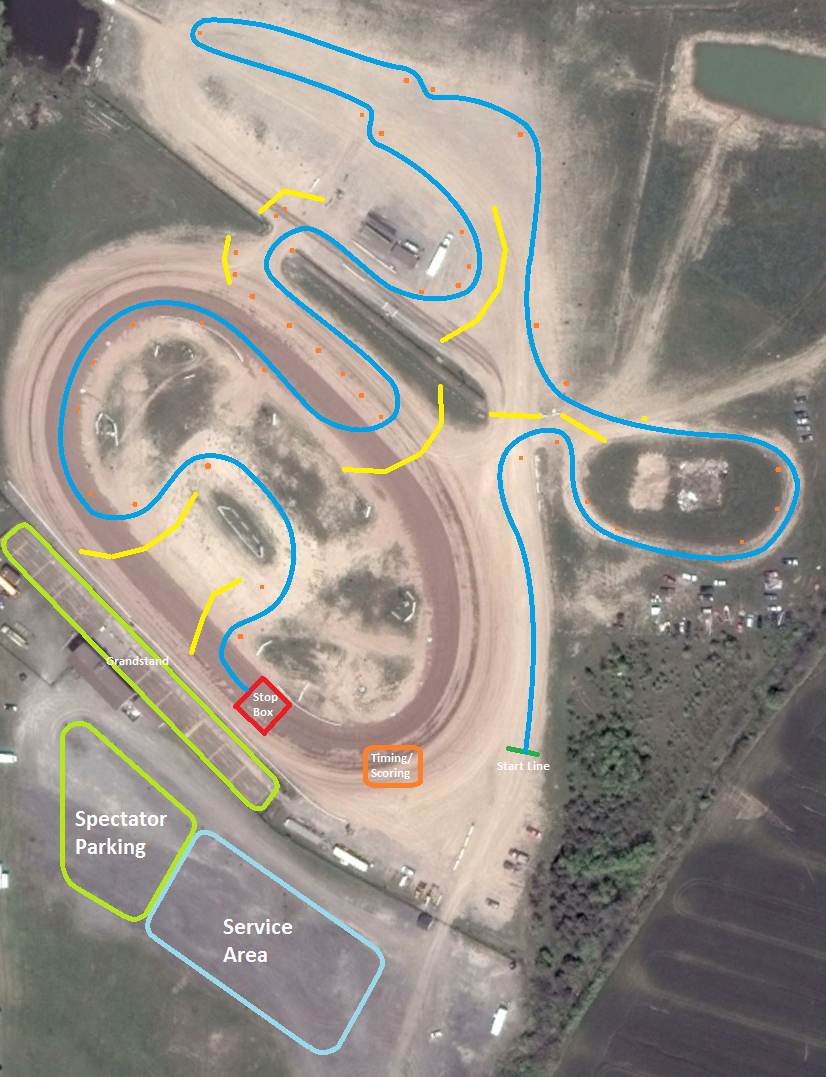 We were at the Humberstone track on a beautiful, sunny, summer-like weekend in September, and the course was extremely dry. It was so dry, in fact, that the cars kicked up too much dust, according to complaining neighbours, who forced an end to the day’s racing one run prematurely. During the lunch break, organizers sent a water truck to dampen the course with the hope of mitigating some of the dust. This resulted in a very slippery track; but, unfortunately, the effort was insufficient to combat the unusually dry fall. 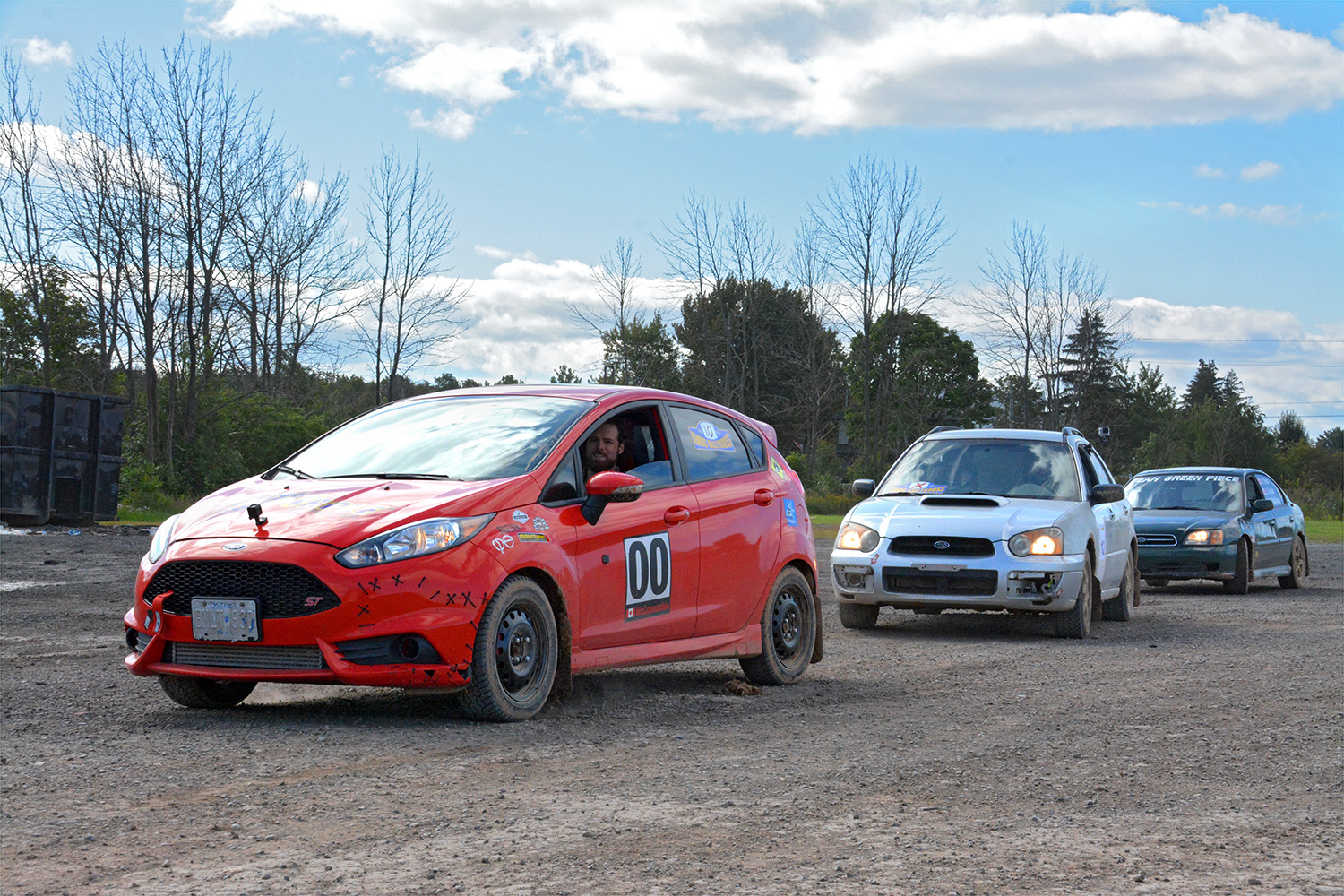 We drove Sean McConnachie’s modified 2014 Ford Fiesta ST. Most of the car’s modifications strengthen the car and improve performance. Removing the rear seats and other unnecessary weight is the easiest and most cost-effective way to improve a car’s performance; doing so helps with acceleration, braking and cornering. Front and rear skid plates are added to protect the underside of the car from flying dirt and gravel. Heavy-duty off-road suspension absorbs the pounding that the car is subject to on a race weekend. Engine modifications include: a race engine cooler, an upgraded blow-off valve, and a custom tune from Mountune, who specialize in Ford Fiesta, Focus and Mustang performance tuning. 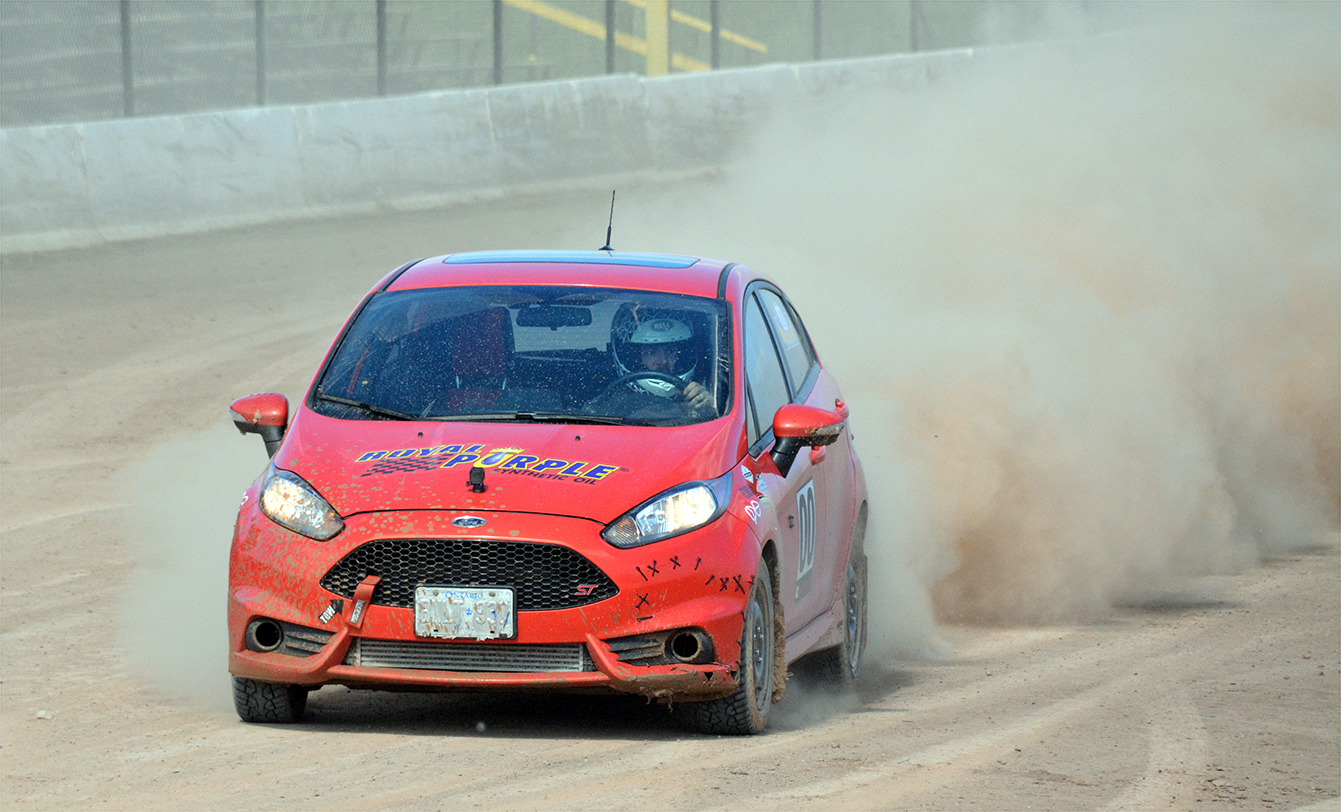 McConnachie performs all of the modifications to his car himself, thereby saving labour charges. He invests approximately $21,000 in his car, which is comprised of roughly $17,000 for the Fiesta and about $4,000 in tuning parts.

On the much more frugal end of the scale are the 20-year-old Subaru WRXs running on 15-year-old gravel race tires. The total investment for those drivers, including the car and parts, is just over $1,000. Regardless of budget, all 30 drivers participating in the weekend’s racing seemed to be having the times of their lives. 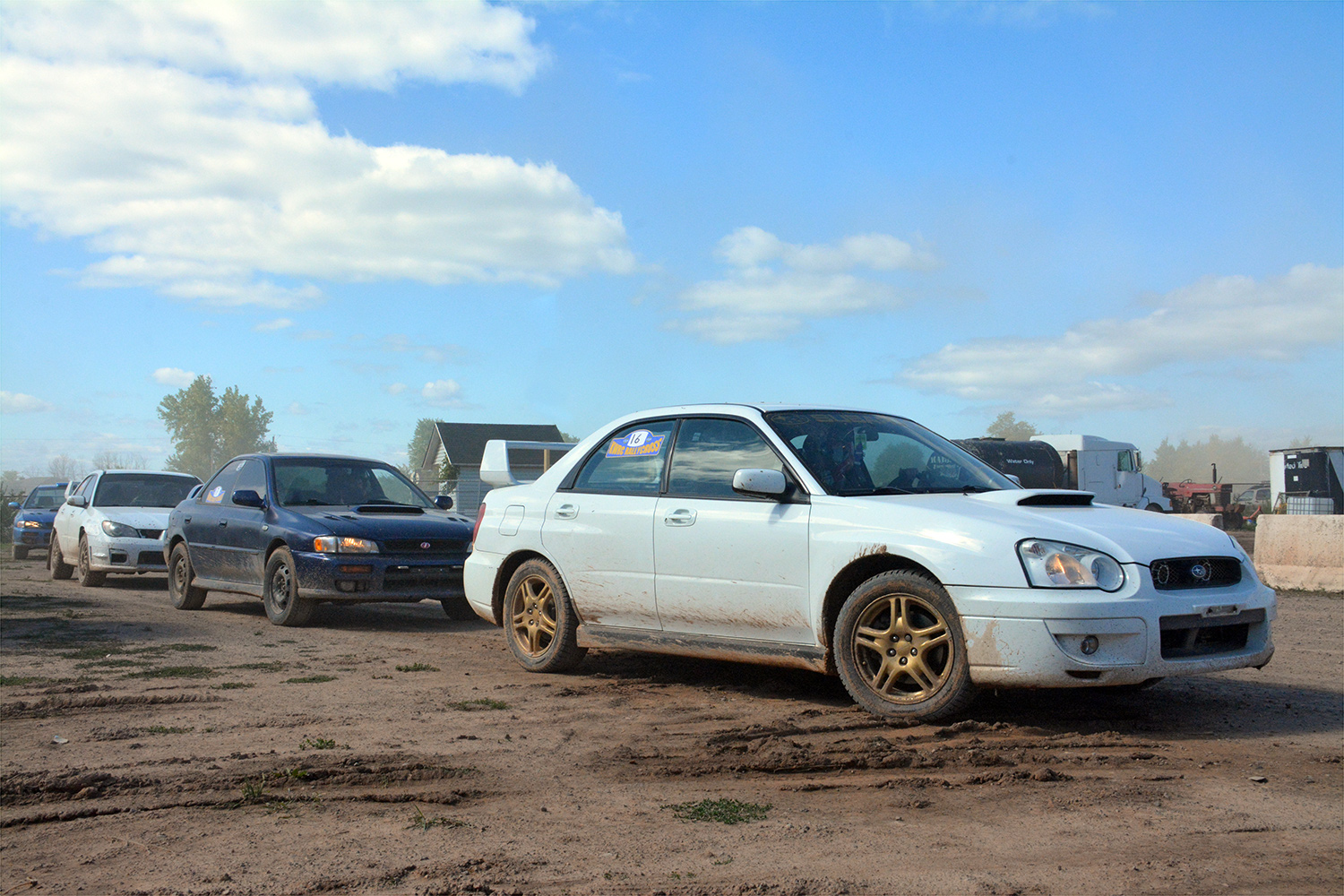 I had never before driven a rallycross car on a rallycross course, so,  during the mid-day break from the action, Sean drove and I sat shotgun for a few familiarization laps. Then it was my turn. As Sean had an afternoon of racing ahead, the last thing I wanted to do was damage or break his car. But Sean encouraged me to have fun and push the car, so I did. From the moment I got behind the wheel and launched out of the start box the joy began.

During my familiarization I tried to decipher the course, gain a little speed, and not hit anything. With each lap, my pace quickened and so did the fun factor. I cannot emphasizes enough how much fun you can have going so relatively slowly around a rallycross course. I covered most of the course in second gear–only once, for a very brief moment, did I get into third gear. The main reason for all of the adrenalin is the fact that the car is so loose during acceleration, braking and, especially, cornering. The faster I went around each corner, the more the rear end of the car slipped out, and that is what’s so much fun: balancing the throttle, throwing the rear end of the car around each corner, counter-steering to your heart’s content and kicking up all of that dust. It is an absolute blast.

Sadly, the first race of the five-race KWRC Rallycross series was cancelled due to bad weather. But, after that unexpected start to the season, Sean has been the quickest in the two-wheel drive category each race weekend. Unfortunately, in race number 2, Sean also racked up the most penalties, which relegated him to last place. On our race weekend, Sean finished first in his two-wheel-drive class and fourth overall out of the thirty cars participating. Sean is now in second-place in two-wheel-drive standings and will be fighting for the championship at the final race of the season at the end of October. With a win in the final race Sean should clinch the two-wheel-drive championship in his rookie Rallycross racing season.