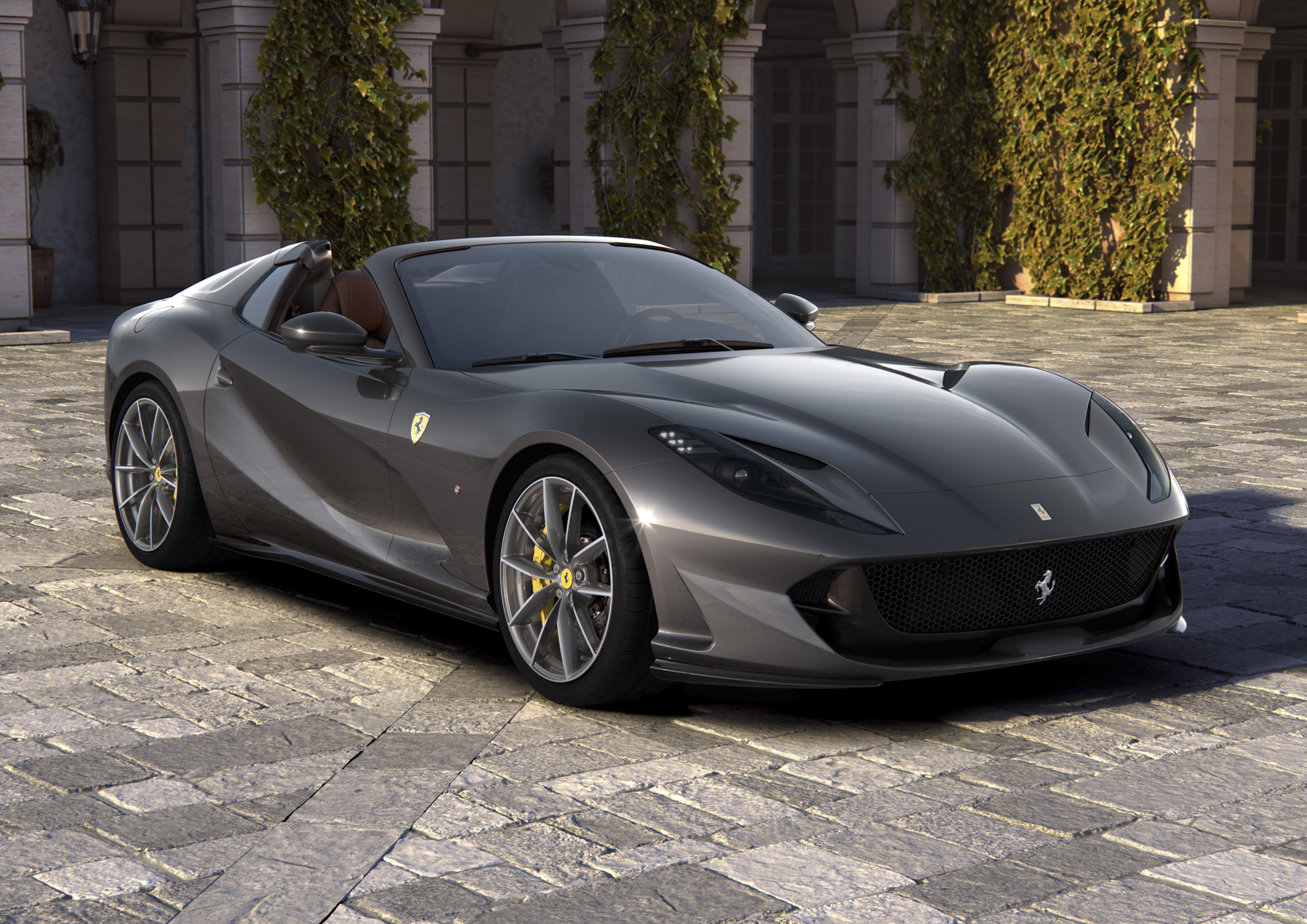 The V12 Ferrari 812 GTS is the most powerful drop top available and is the spider version of Ferrari’s 812 Superfast. Under the hood of both cars lurks the 788 horsepower 65° 6.5 litre V12 engine that is capable of launching the two passengers from rest to 100 km/h in under 3 seconds. Top speed is more than 340 km/h. All of that power arrives far up the rev range giving the driver a reason to wind it up to 8,500 rpm, where it reaches maximum power, on the way to its 8.900 rpm redline. Maximum torque of 529 lb-ft arrives at 7,000 rpm but 80% is available at just 3500 rpm. 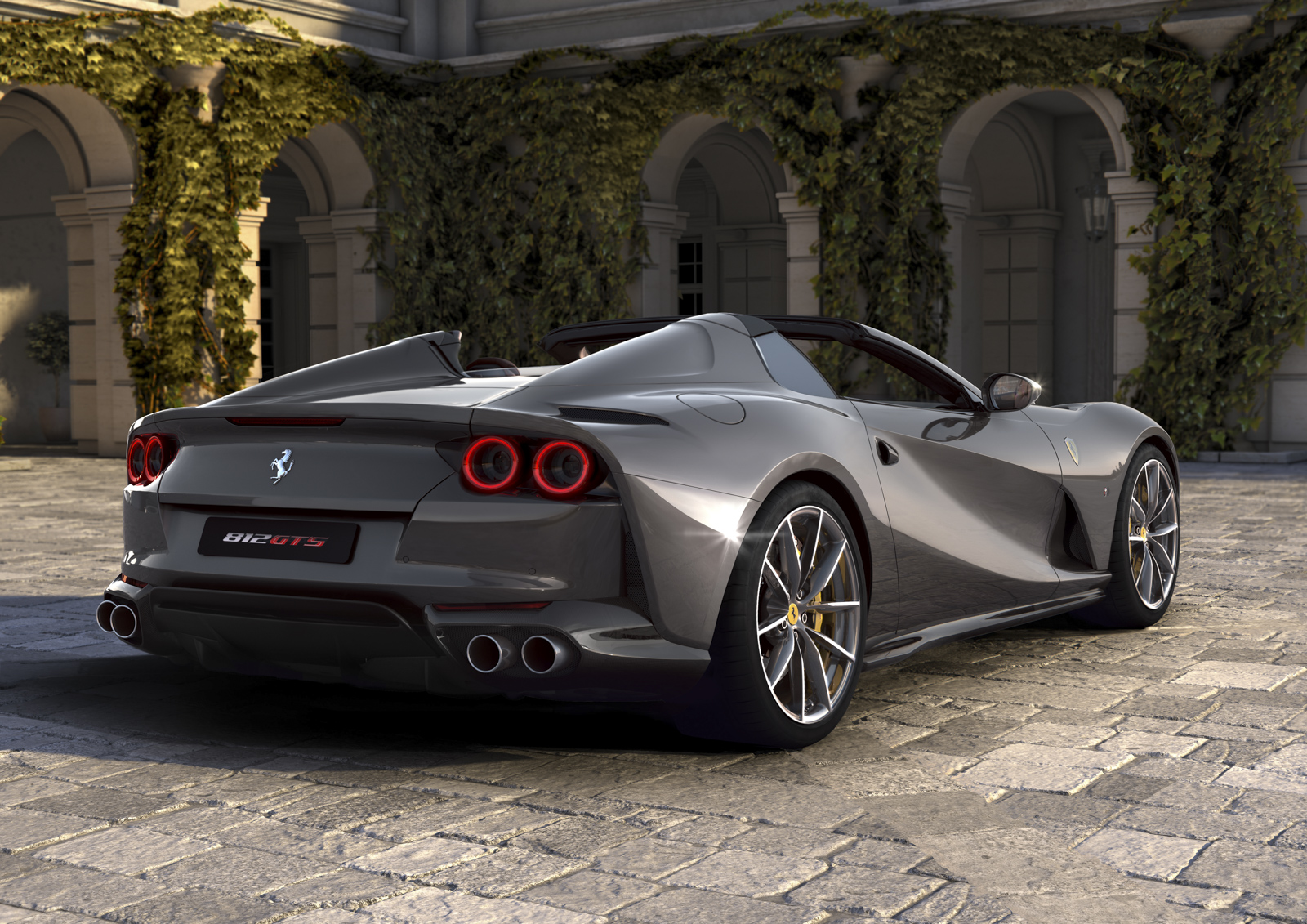 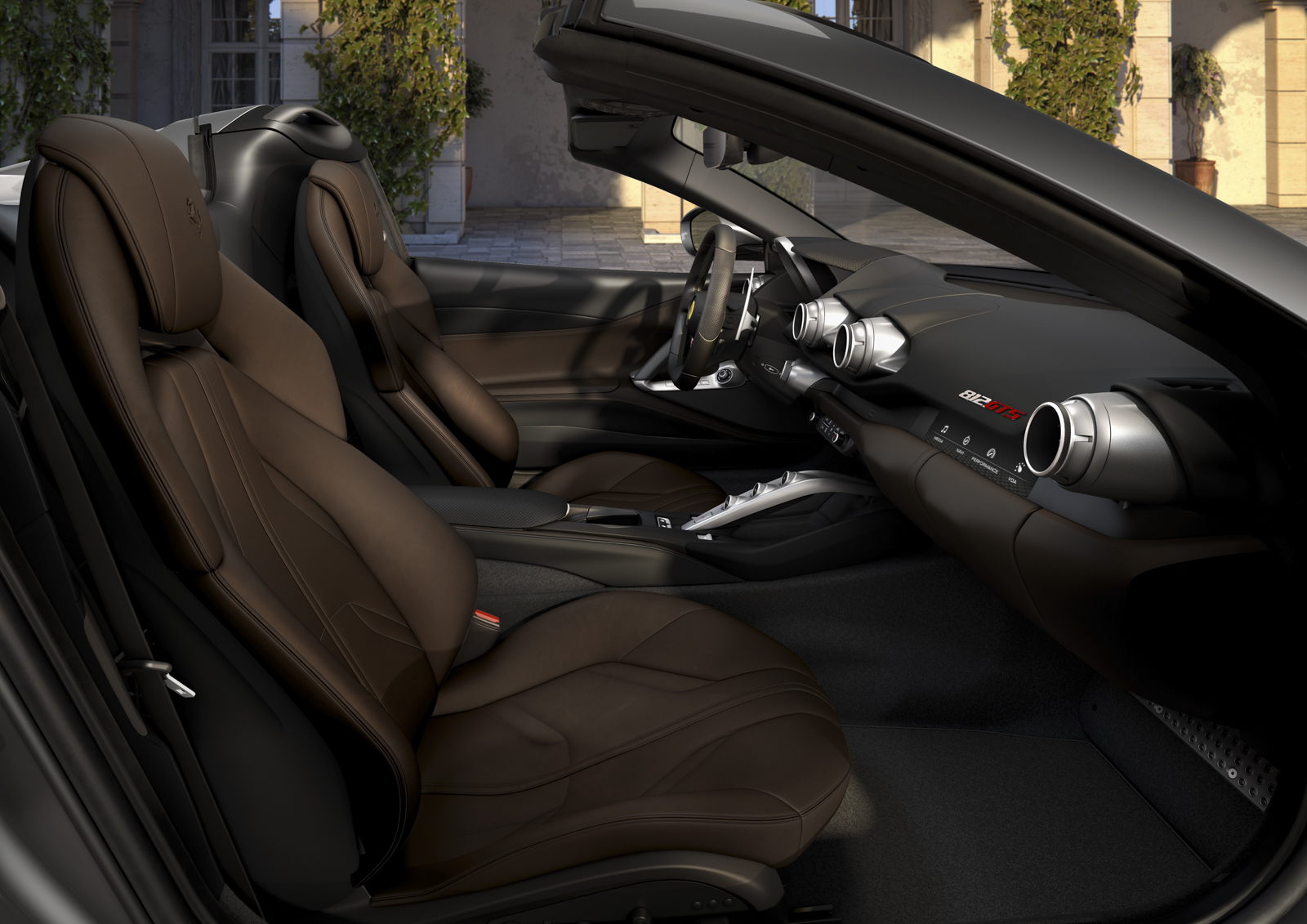 The high pressure injection system also improves nebulisation of the injected fuel, reducing the amount of particulates emitted when the catalytic converter is warming up. The Gasoline Particulate Filter (GPF) along with the Stop & Start On the Move strategy, which cuts and restart the engine while the car is on the move, ensures the engine meets all emissions regulations. 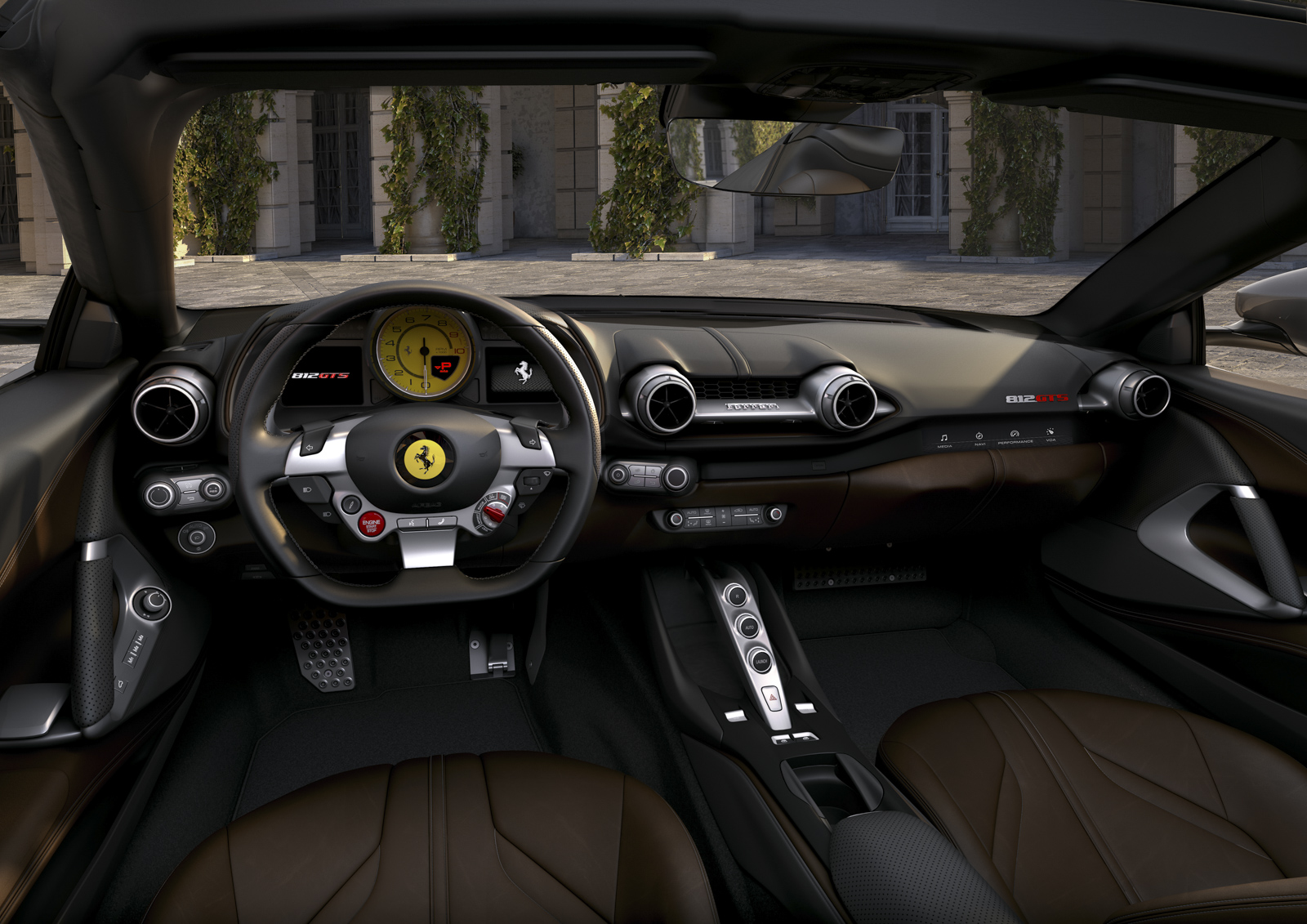 The dual-clutch transmission’s gear-shifting has been improved. When the Manettino is in sportier settings, both up- and down-shift times have been significantly reduced and the transition time has been optimised to enhance the driver experience.

The geometry of the exhaust system was evolved to increase and balance the sound from the engine and tailpipes, with the aim of accentuating the car’s extremely sporty character with the top down.

The retractable hard top (RHT), which opens in just 14 seconds at speeds of up to 45 km/h, does not reduce the interior dimensions, maintaining the car’s roomy cockpit. The electric rear screen, which acts as a wind-stop, makes the car truly useable with the top down while, with the top up, it can be left open to allow the passengers to hear the naturally-aspirated V12’s unique soundtrack. 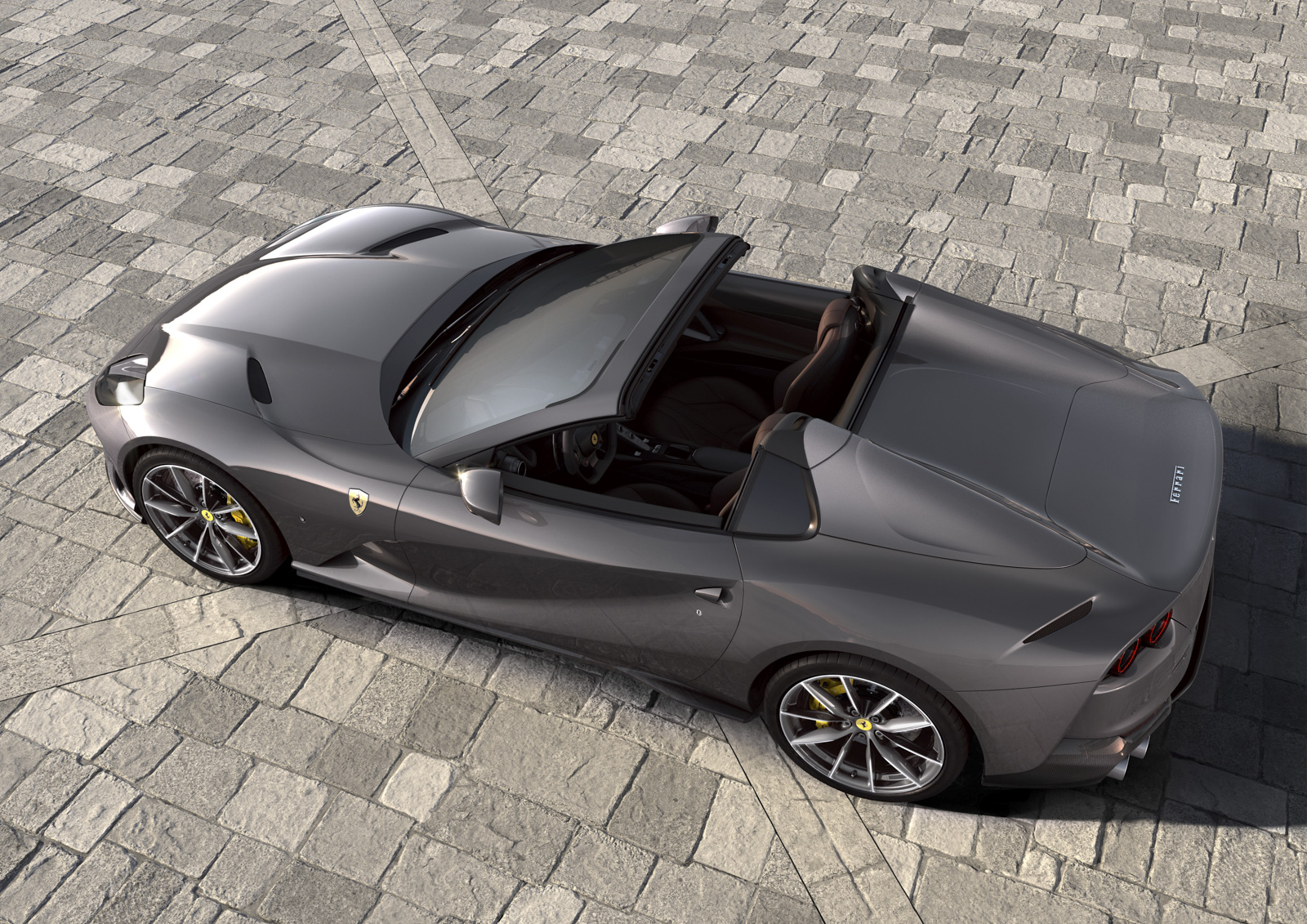 Ferrari’s 812 GTS spider arrives fifty years after Ferrari’s first V12 spider, the 166 MM, which won two of the most prestigious endurance races in the world in 1949: the Mille Miglia and the 24 Hours of Le Mans. The last in Ferrari’s long lineage of front engine V12’s was the 1969 365 GTS4, also known as the Daytona Spider because of Ferrari’s win in the 1967 24 Hours of Daytona when two works 330 P4s and the NART-entered 412 P took the chequered flag side-by-side to occupy the top three places.

The front-mounted V12 architecture has not been used in a Ferrari series-production spider since the 365 GTS4. Four special series limited editions cars were built: the 550 Barchetta Pininfarina in 2000, the Superamerica in 2005, the SA Aperta in 2010 and, most recently, the F60 America of which just 10 were built to celebrate Ferrari’s 60th year on the American market in 2014. 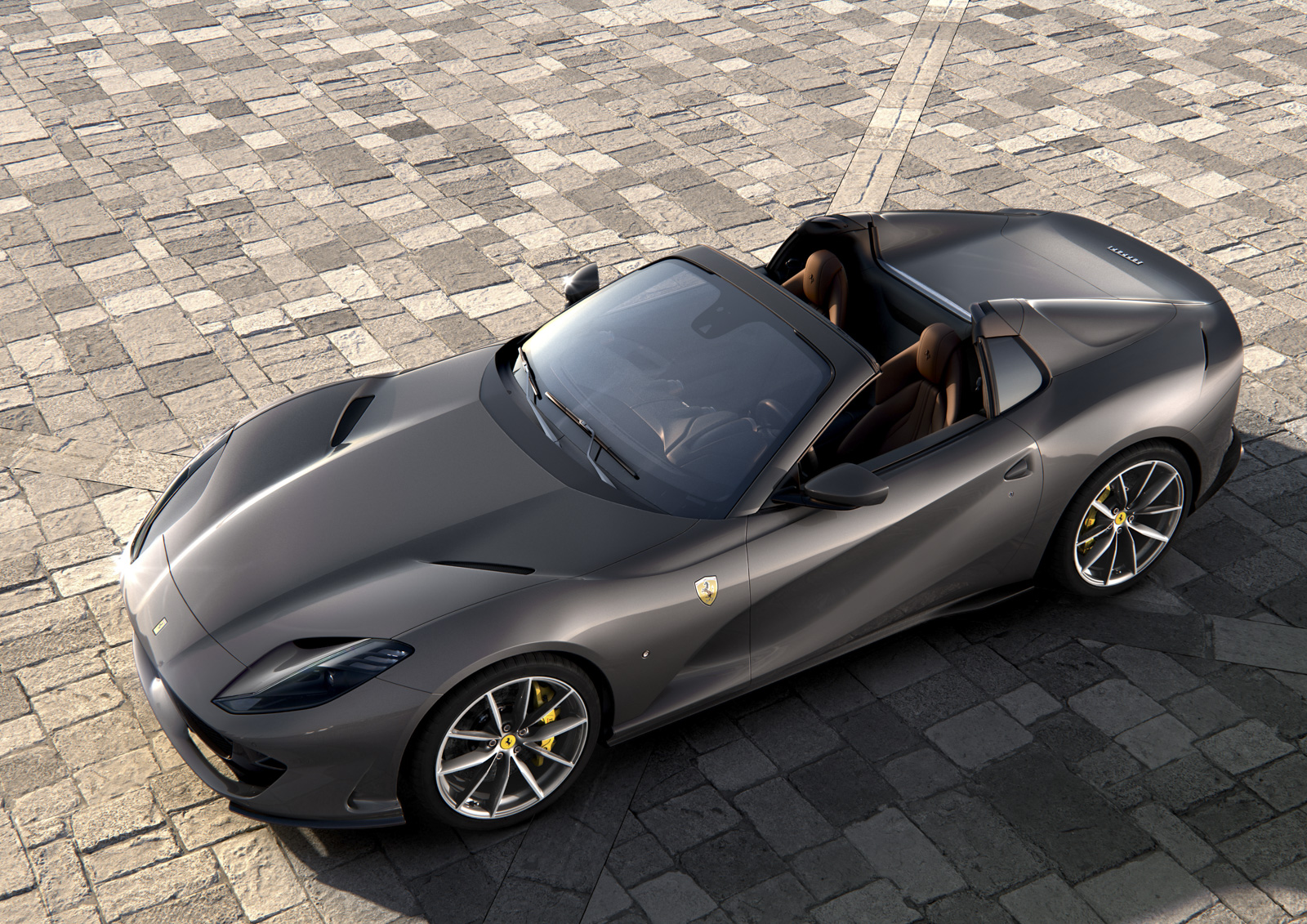