The 56th running of the Rolex 24 at Daytona was a record-setter, a record-breaker and a very successful weekend for General Motors, Ford and Lamborghini. The overall winner of this year’s twice-around-the-clock race was the No. 5 Mustang Sampling (no, it is not a Mustang, it is a Cadillac) driven by Felipe Albuquerque, Joao Barbosa and Christian Fittipaldi (the nephew of two-time Formula 1 Champion and Indianapolis 500 winner, Emerson Fittipaldi). The Cadillac-powered DPi (Daytona Prototype international) broke the record for the most laps completed during the 24 hour race. The previous record was 762 laps of the 3.56 mile (5.72 km) road course, totaling 2,712.72 miles (4365.69 kms) set in 1992 in a Nissan R91CP. This year, the Mustang Sampling team covered a total of 808 laps and 2,876.48 miles (4629.24 kms) because of an unusually few number of caution periods, which slow the cars down, impeding their ability to complete laps.

Also finishing on the podium in the Prototype class was the No. 31 Whelen Engineering Racing Cadillac DPi driven by Eric Curran, Stuart Middleton, Mike Conway and Felipe Nasr. 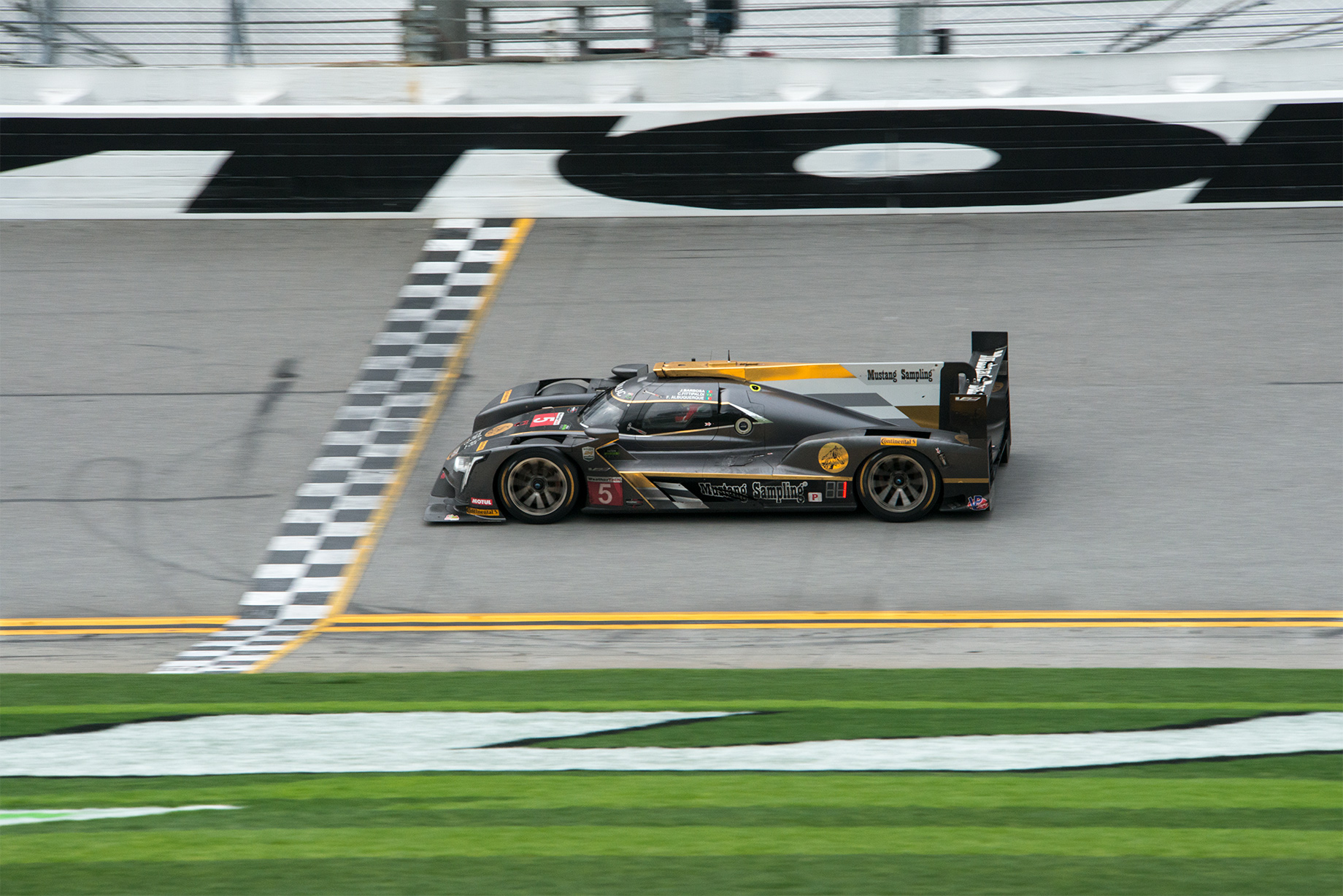 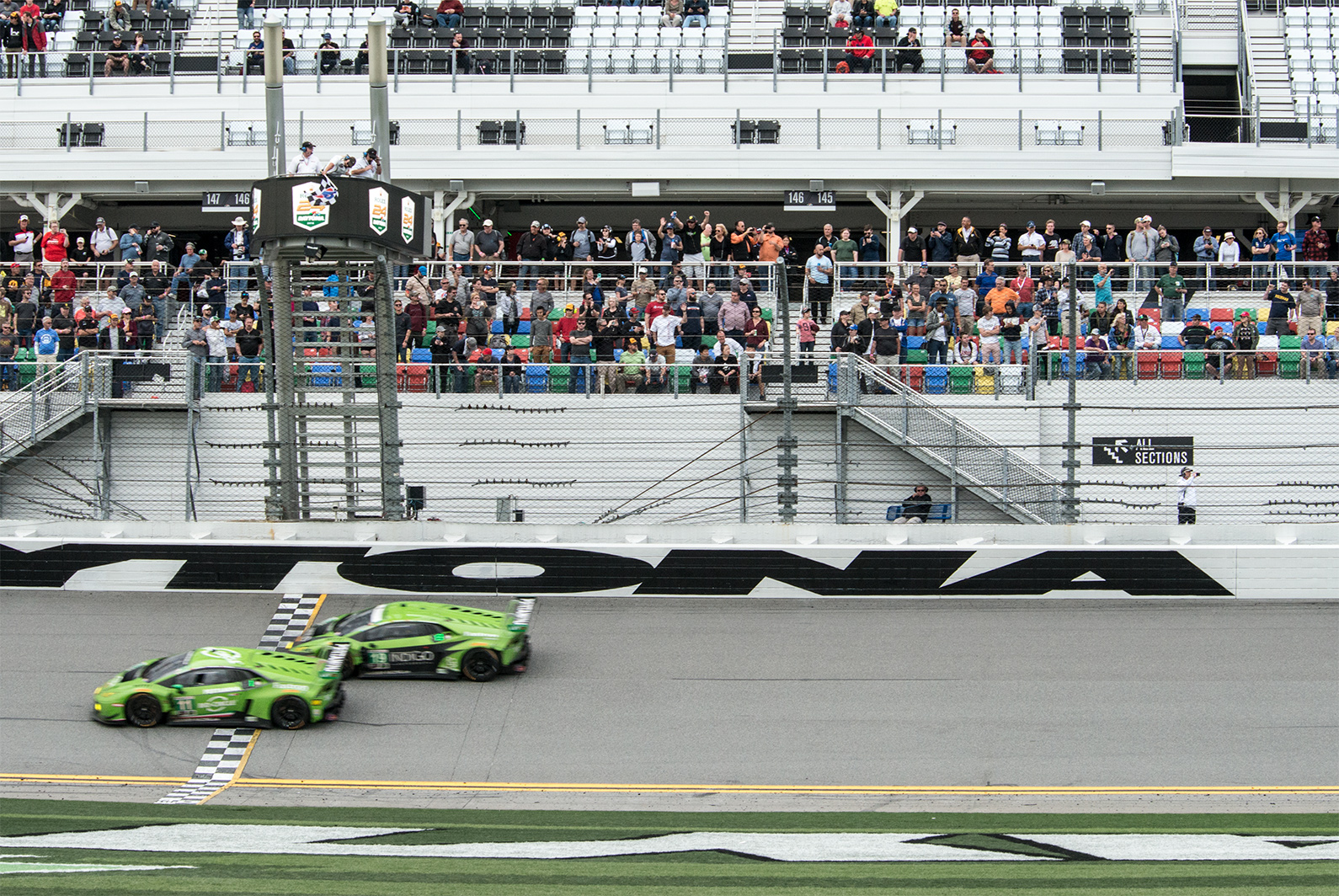 In the GTLM class (Grand Touring Le Mans), Ford and Chevrolet dominated with Ford GT’s taking the first two spots followed by two Corvettes. The Markham, Ontario built No. 67 and No. 66 Ford Chip Ganassi Racing Ford GT’s finished first and second, respectively, followed by the No. 3 and No. 4 Corvette Racing Chevrolet Corvette C7.R’s which finished third and fourth respectively (and coincidentally). 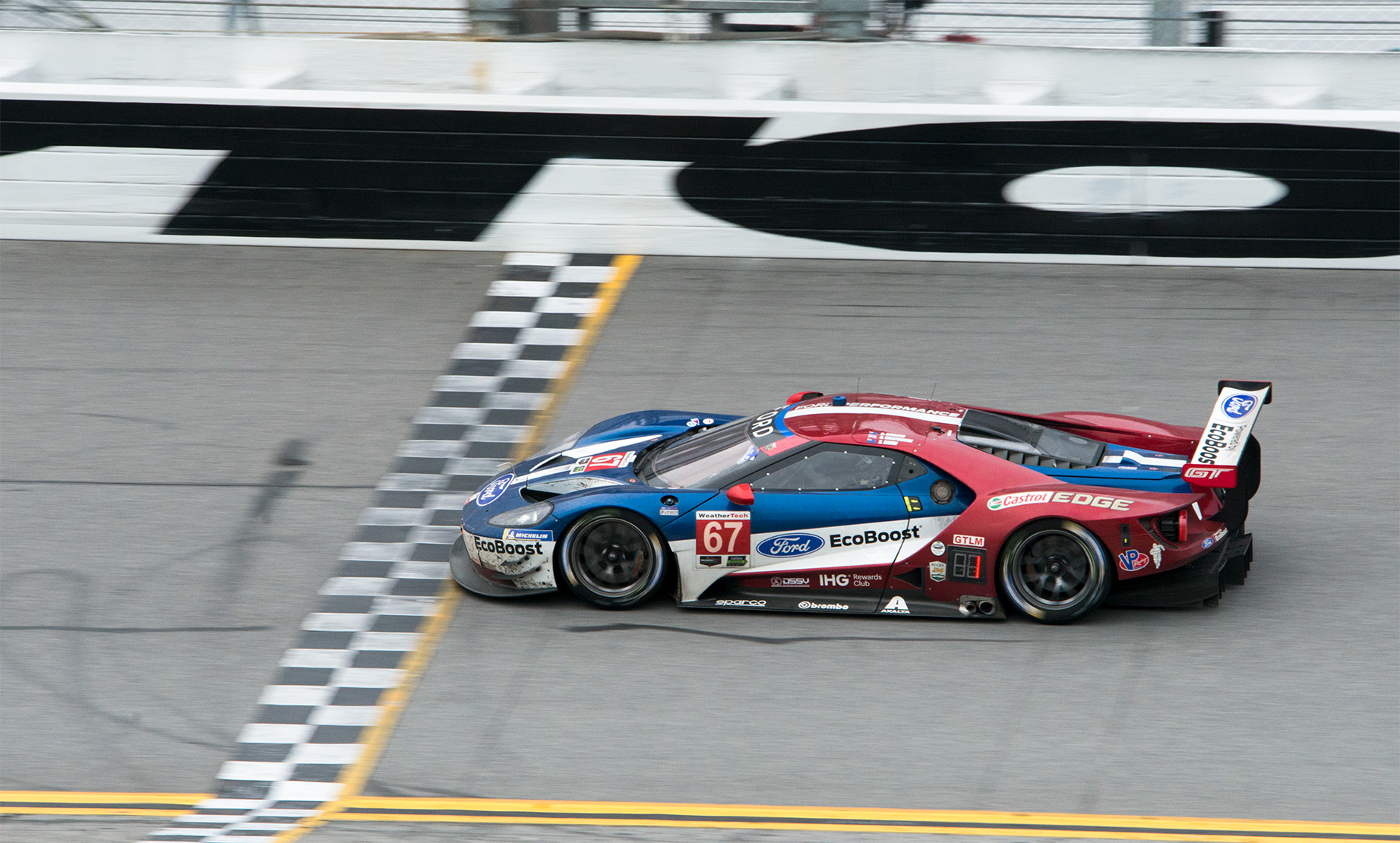 BMW launched its new flagship M8 GTLM race cars which looked great and proved to be reliable, but were not able to continue the winning ways of the M6’s they are replacing. They finished seventh and ninth in class. This was the maiden race for this new car and it will likely prove to be more competitive in future races.

Porsche, Ferrari, Mercedes-AMG, Audi, Nissan, Lexus and Mazda did not have very fruitful weekends and did not finish on the podium in any of the race classes. 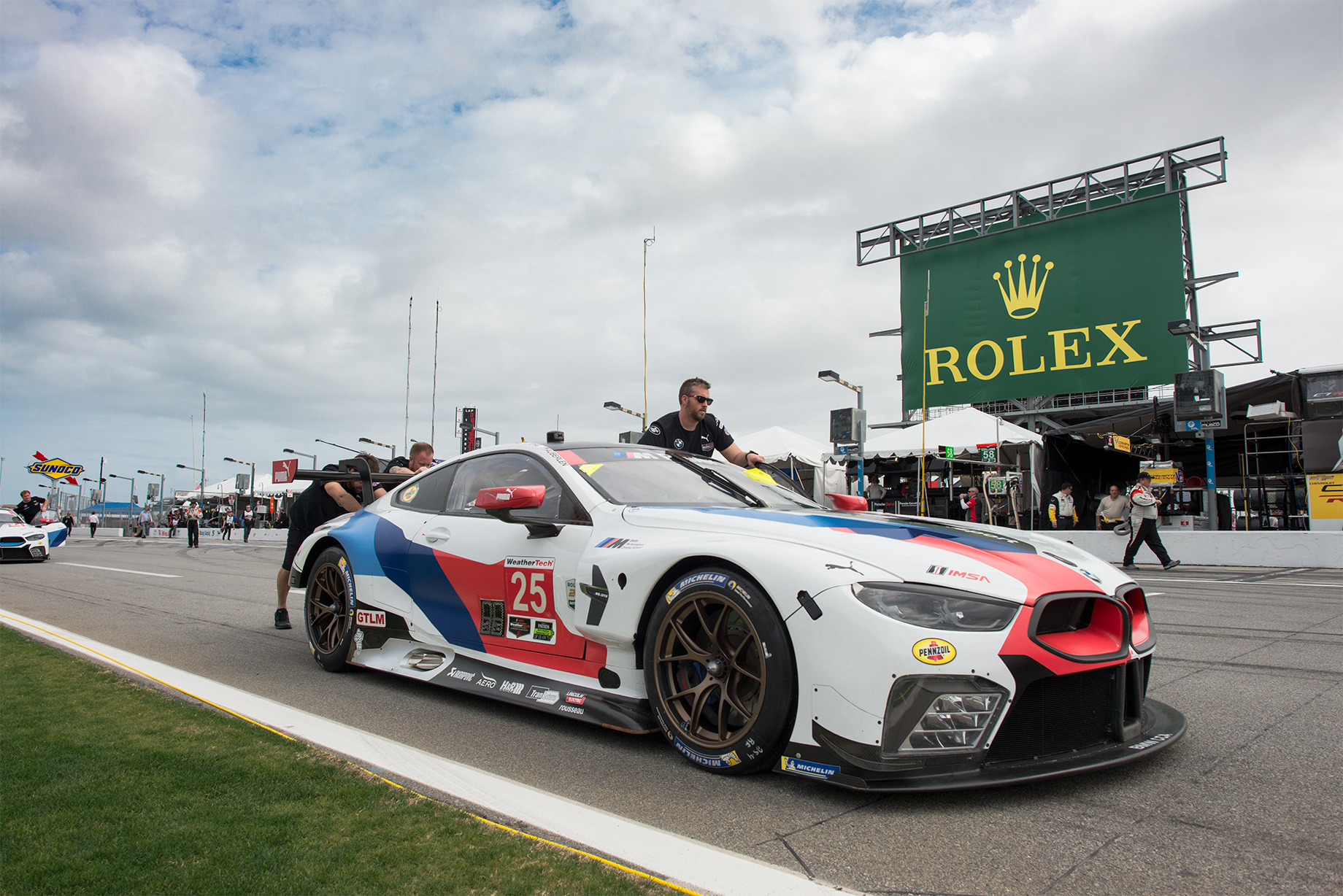 One of the big news items at this year’s race was the presence of not one, but two current Formula 1 drivers including Canada’s own Lance Stroll. The driver who really moved the needle, and contributed to the noticeable increase in media coverage and spectator attendance, was two-time Formula 1 Champion Fernando Alonso. His recent non-F1 exploits also include a drive in the 2017 Indianapolis 500 (for which he missed the prestigious Monaco Grand Prix which is held on the same weekend in May). 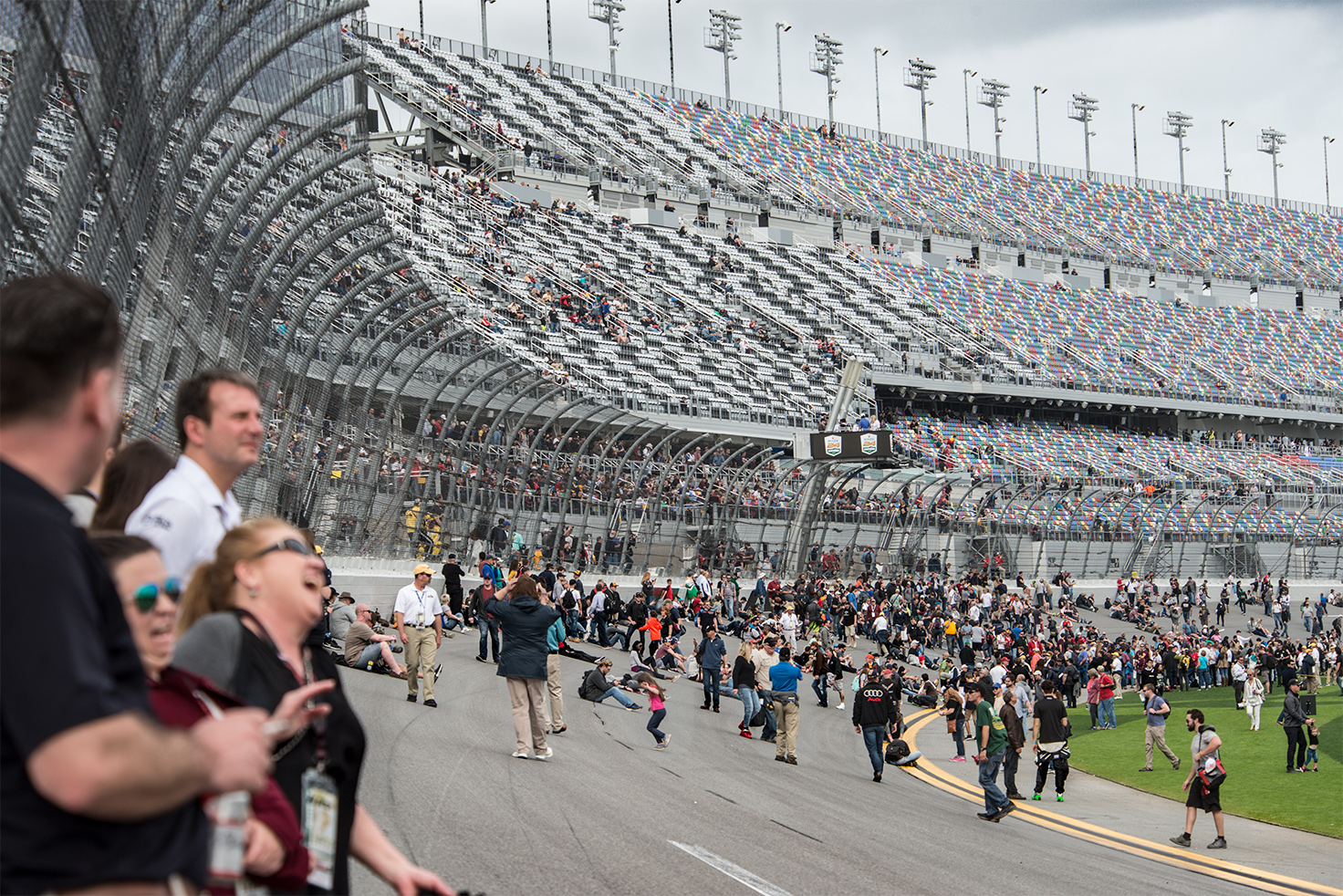 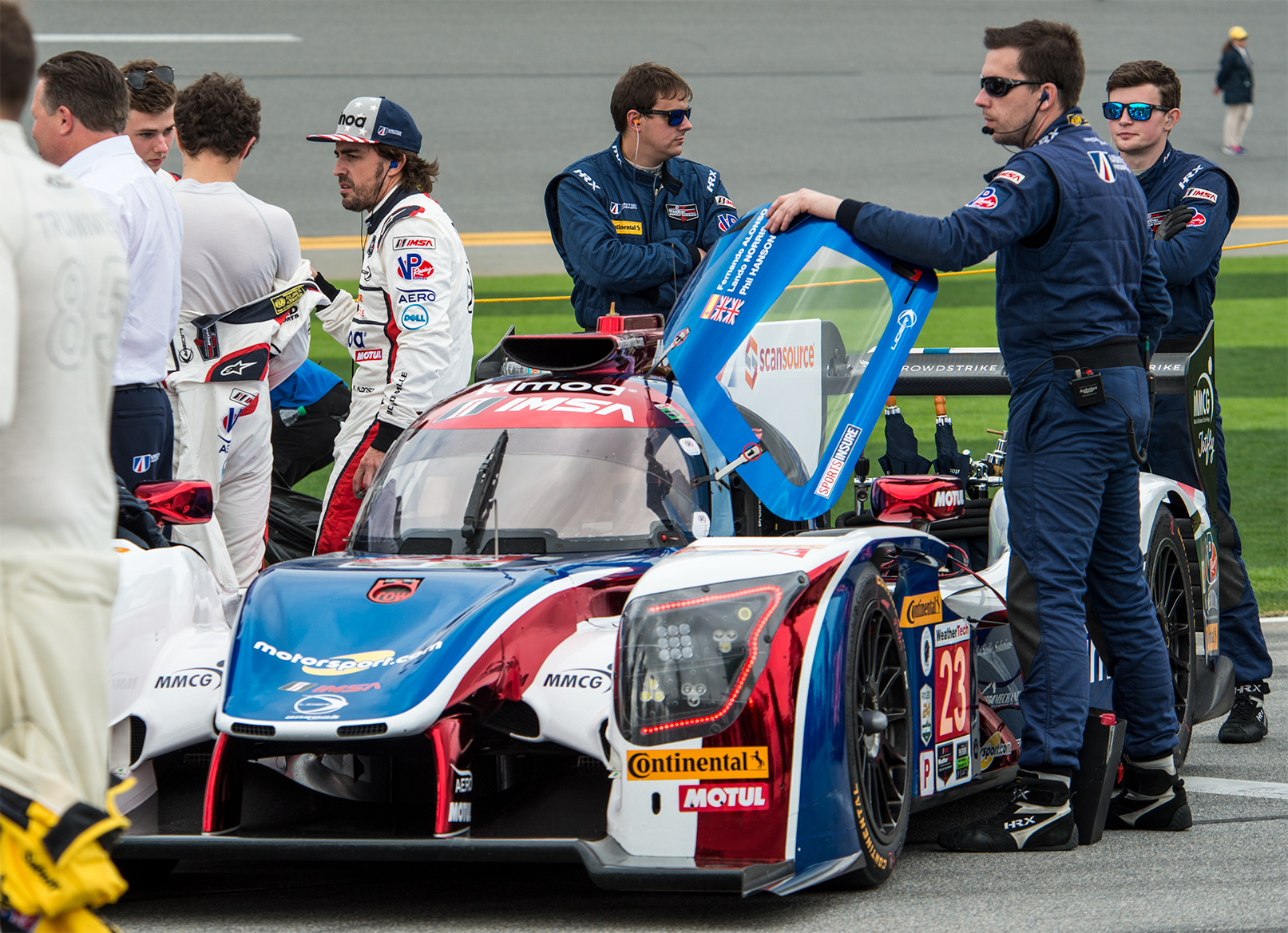 “I have a positive feeling about the race,” said Alonso after his final stint in the car. “I think unfortunately we had too many issues that were out of our control, and some unlucky situations. The car felt quite competitive which was a surprise because we were not very competitive in practice three weeks ago and we were not competitive this week. But then in the race this changed and we were probably constantly in the fastest three cars on the track when we were running. That gave us a lot of confidence, a lot of momentum into the night. We had a brake issue and we lost 40 minutes. So that was the end of our race probably. Then we had a throttle issue and then again a brake issue. Unfortunately also for the team the sister car had a clutch problem. This is racing. This is how it goes. But as I said, positive feelings in spite of the issues and the reliability. It was a very nice experience the whole event, it was very nice. This nicest thing was how competitive we felt, with no high hopes. We were never competitive and suddenly we had the pace and everyone was smiling in the garage so that was a nice feeling.” Alonso said that he is looking forward to coming back to Daytona. 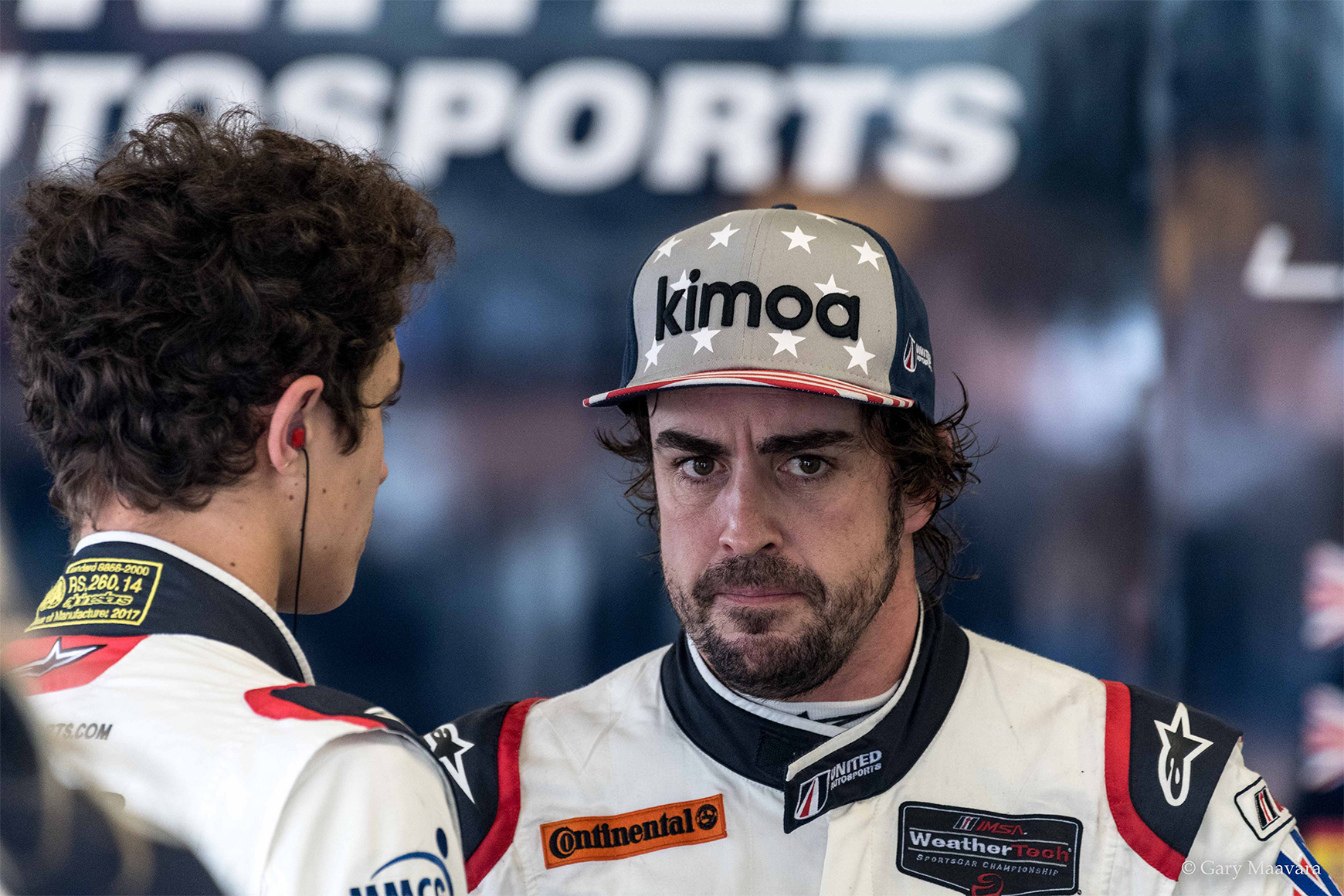 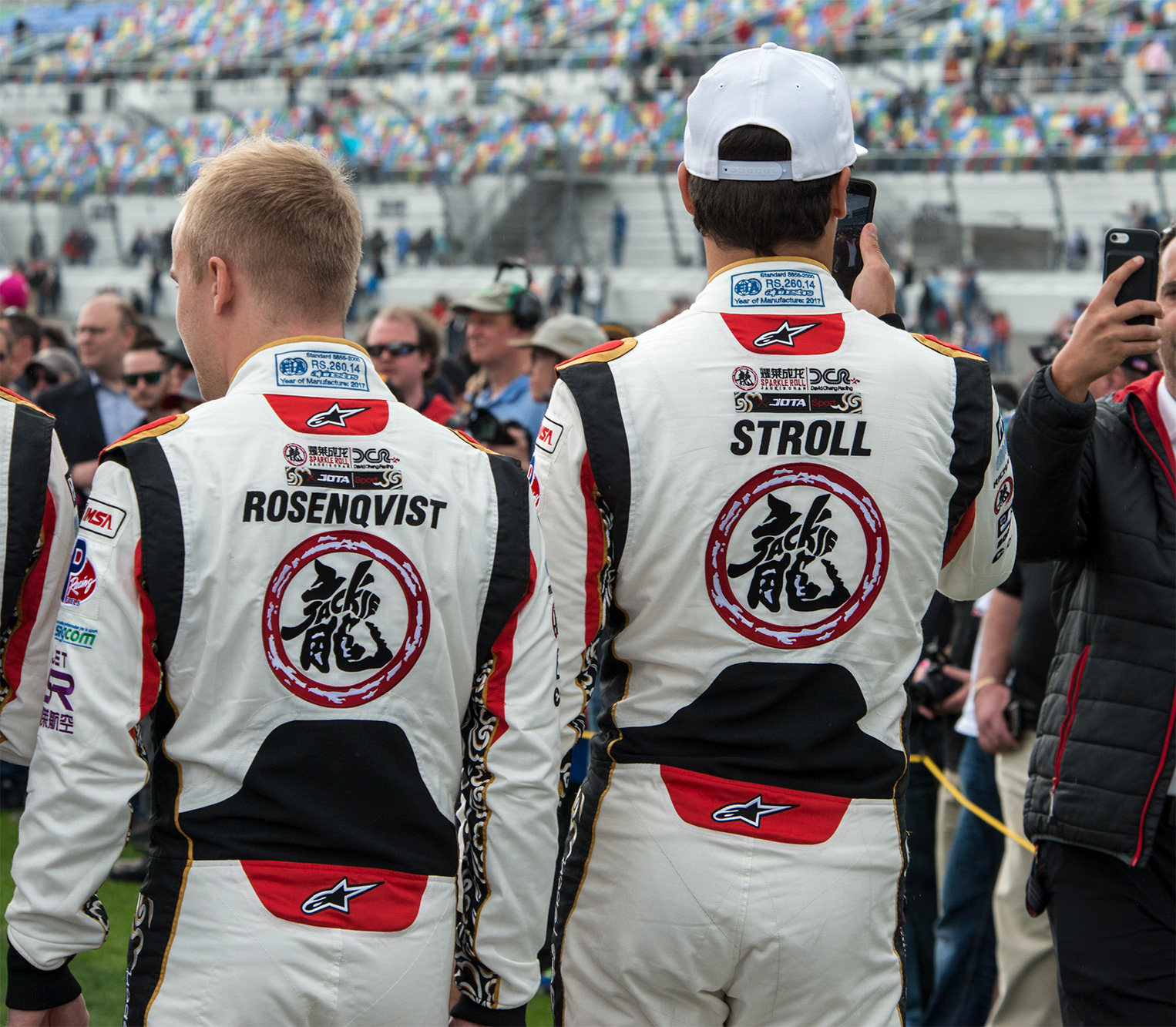 “I’m here and I’m looking forward to 2018 and I’m looking forward to kicking it off in style with the Rolex 24,” said a very relaxed Stroll the day before the race. When asked about what it’s like to come back to Daytona for his second 24 hour race Stroll said, “Now it’s starting to become easier and easier every time I step into the car. Having the experience of being here once before really helps. The car has been good. We’ve come a long way since the first session and now the race is just about staying out of trouble, executing pit stops, trying to get through the traffic as quick as possible. We have a good package.” The team qualified sixth in class and sixth overall but finished eleventh in class and fifteenth overall.

Eighteen year-old Devlin DeFrancesco is among the other Canadian drivers participating. “It’s my first time here at the Rolex 24 at Daytona,” said DeFrancesco with 3 hours remaining in the race. “We’re in seventh at this minute and we started twelfth. The team have done a great job through the night. We’ve had no major drama, no major hiccups, we’ve all gone out and just been consistent, put laps in, got through traffic quite well. We had a few niggly issues but overall the team have done a fantastic job considering everything was so last minute. I think if things go our way we could finish in the top five. We’ve all had a few close moments with the GT cars but all of the team mates have done a mega job. I’m really proud of all of the boys” His team mates in the No. 85 JDC-Miller Motorsports ORECA LMP2 were Austin Cindric, Robert Alon and Simon Trummer. They finished a respectable sixth in class and sixth overall.

Kyle Marcelli, from Barrie, Ontario, drove the No. 14 3GT Lexus RC F GT3 for more than 7 hours during the race but did not get the result they were hoping for. With both team cars running in the top three throughout the early goings, team mates Bruno Junqueira, Philipp Frommenwiler and Dominik Baumann were optimistic that they could finish on the podium.

The No. 15 car’s driver lineup included none other than endurance racing legend Scott Pruett. Prior to the race, Pruett announced that, after 50 years of racing, this would be his last race. The 57 year old Pruett (he was racing go-karts at the age of 7) has five overall Rolex 24 wins, tied for the most wins with Hurley Haywood.

“It was business as usual,” Pruett said. “But the memories here, the races here, the fans here … it’s second to none. The first thing to do, now, is toast this career with my wife and my family. And second, it will be just to take a moment to look back, and to savor it all.”

The No. 14 and 15 Lexus RC F GT3’s started third and sixth and finished ninth and fifteenth respectively.

Toronto, Ontario driver Paul Dalla Lana had the perfect start to the race weekend, but unfortunately didn’t finish. “It’s always great to be back in Daytona,” said Dalla Lana before the race. “I didn’t expect to do it this year. We put a deal together a little bit late with Ferrari and we’re loving it, we’re on pole! It’s a great car and I think we’ve got a lineup to fight. I think with these GT3 cars they’re pretty good packages and they’re ready to run. We’re lucky we’ve got a great team and a great car and it’s on us now. This is a funny race of course. It’s just 23 hours of survival and then a big fight at the end. It’s a little different than what we do in the World Endurance Championship where really every second counts. If you build a lead it’s going to be with you for the rest of the race. Here it’s a little more tactical.” 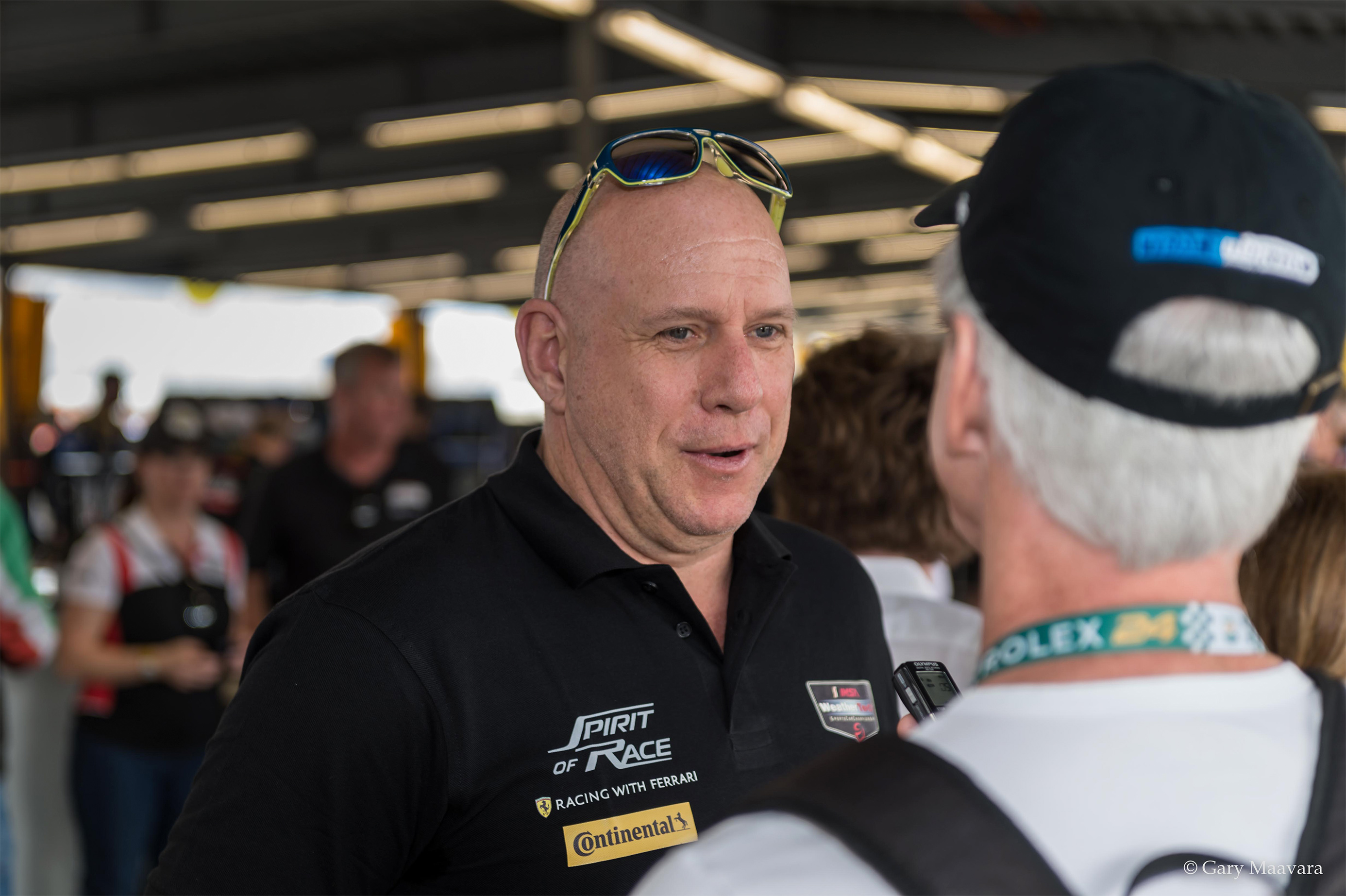 Dalla Lana along with fellow drivers Daniel Serra, Pedro Lamy and Mathias Lauda started the No. 51 Spirit of Race Ferrari 488 GT3 in first place in GTD but with just over 5 hours to go, had to retire after a heavy impact with one of the tire barriers.

The next round of the IMSA WeatherTech SportsCar Championship takes place in Sebring, Florida with the 66th running of the Mobil 1 Twelve Hours of Sebring on Saturday March 17th. 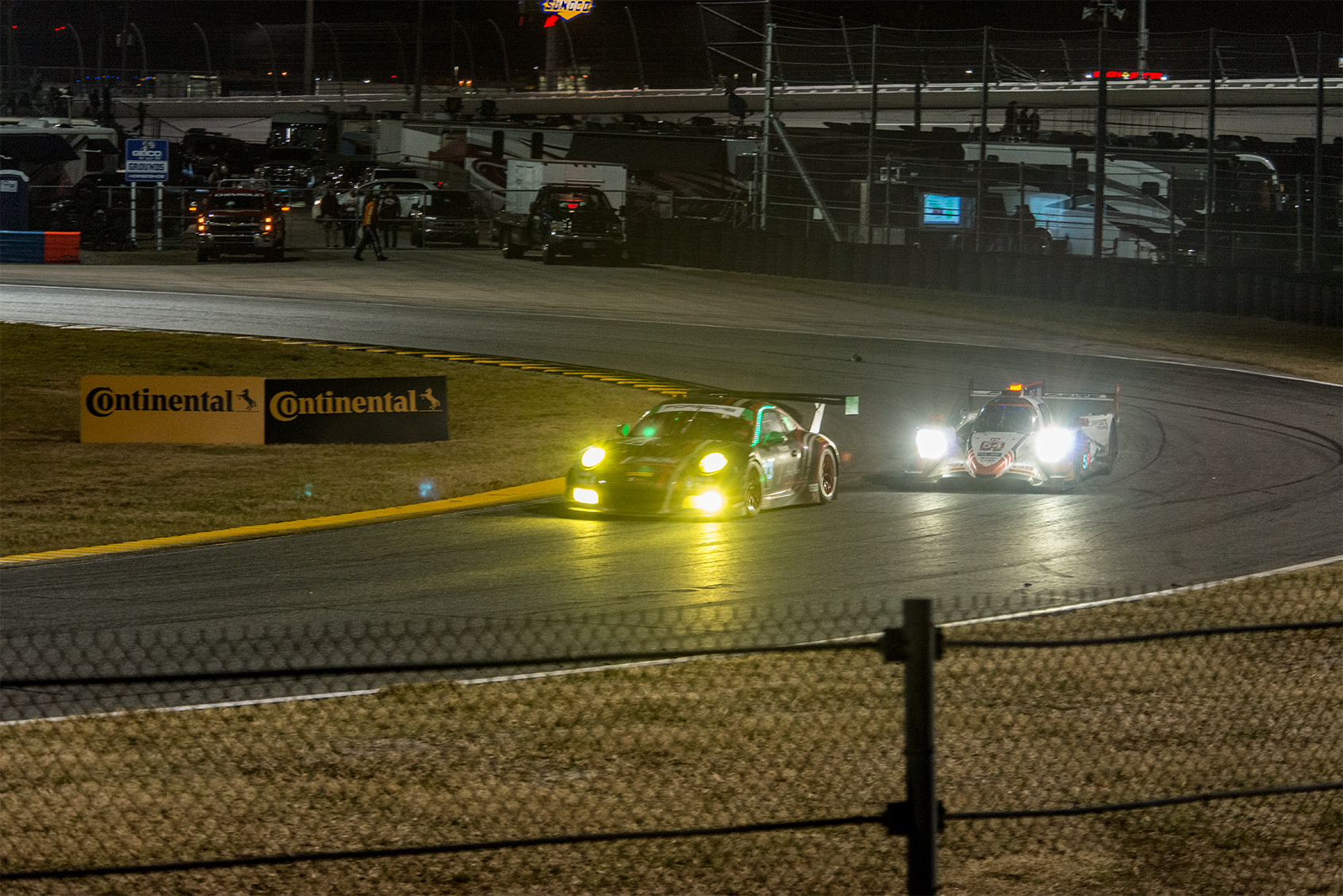