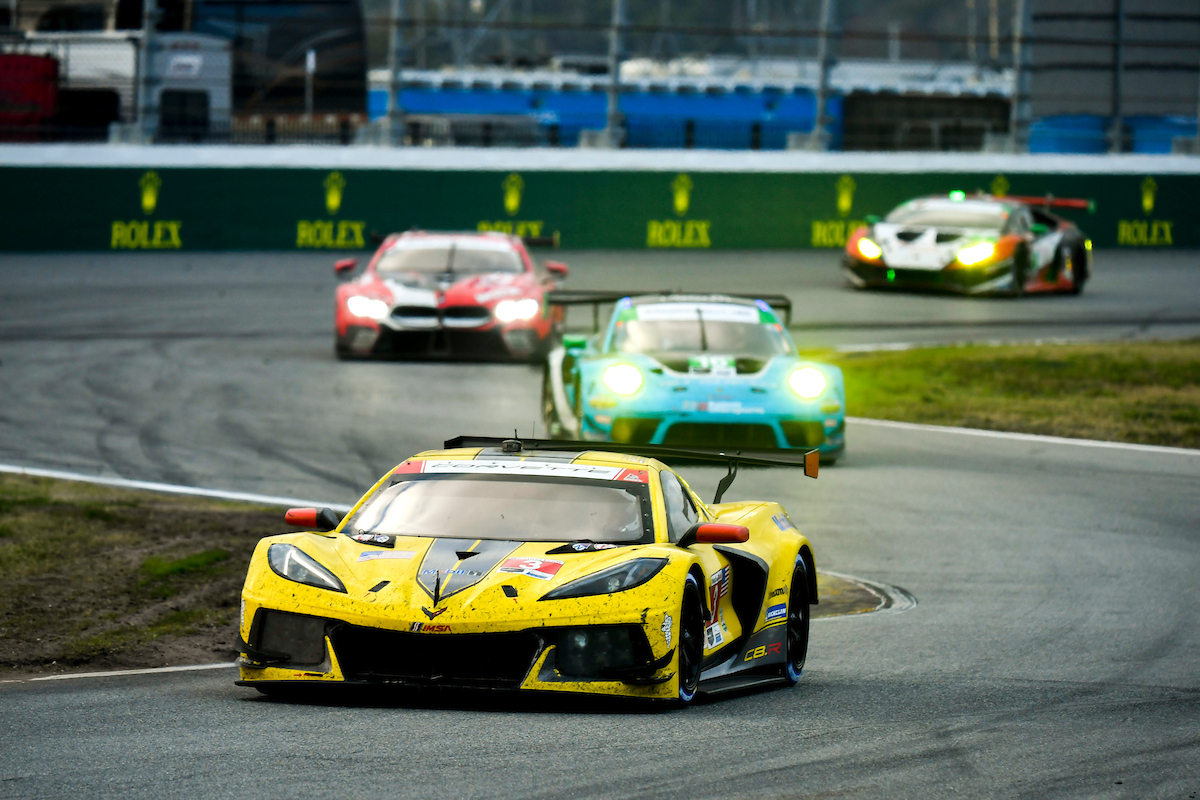 Honda, General Motors, Mercedes-AMG, and the entire Taylor family (no relation, unfortunately) had a great weekend at the 59th running of the Rolex 24 at Daytona. Mother Nature decided to serve up near perfect weather for the most prestigious sportscar endurance race in North America, held annually at the Daytona International Speedway in Daytona Beach, Florida. The race started Saturday afternoon at 3:40pm EST and concluded 24 hours later.

A total of 49 cars competed in the in the five different race classes; DPi, LMP2, LMP3, GTLM and GTD. 44 of those cars featured four driver lineups, five teams went with just three drivers to tackle the grueling twice around the clock race. Of the more than 190 drivers on the grid, 49 are rookies, the youngest of whom is just 16 years old, the oldest is 75. A record low of just 38 cars started last year’s race. 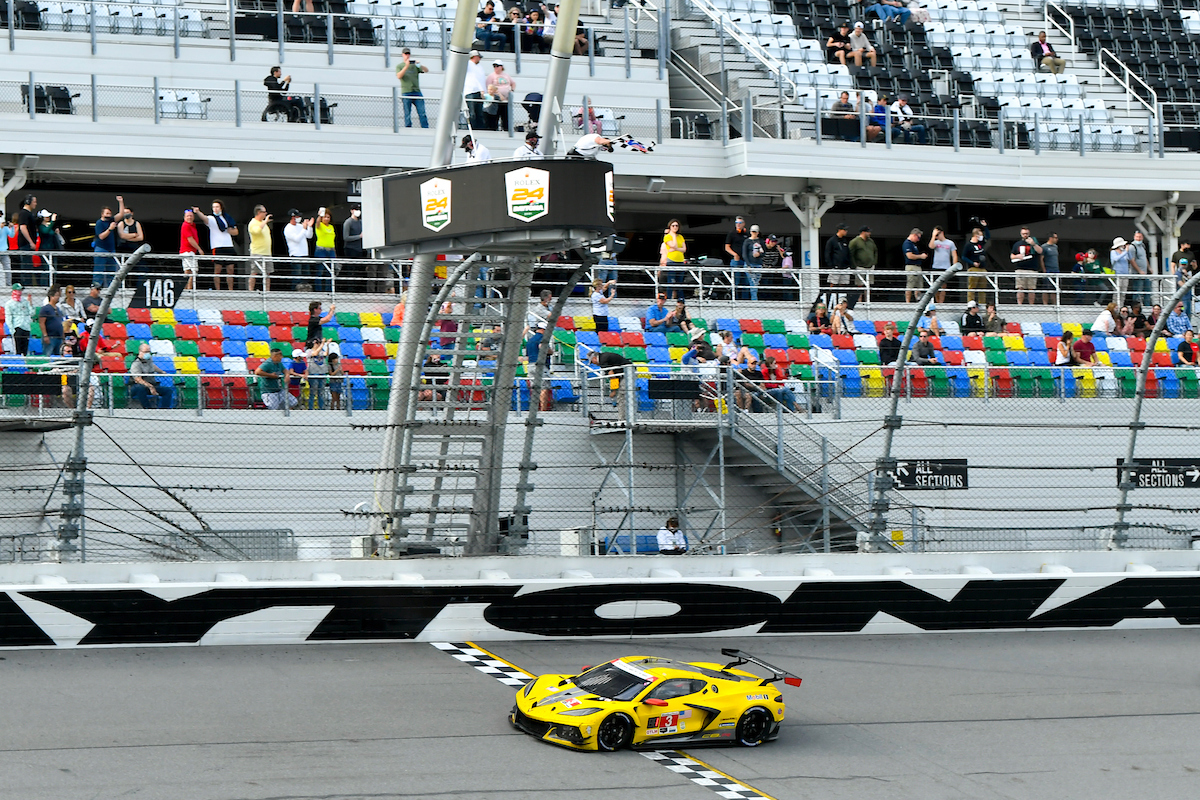 When asked what it is like to win a race like this for his family, Ricky Taylor responded “You take everything you can get, you just enjoy every success that you have. We’re lucky to be doing what we’re doing. To come and do it with your family is amazing. To see Jordan (Taylor) win in the GTLM class, we’re living the dream and you can’t ask for anything more”.

“Jordan won, Ricky won, my team won, six wins at this place is (expletive) awesome,” said Wayne Taylor. Wayne Taylor Racing becomes just the second team ever to achieve three overall wins in a row, 2019 and 2020 with Cadillac power and 2021 with Acura power. 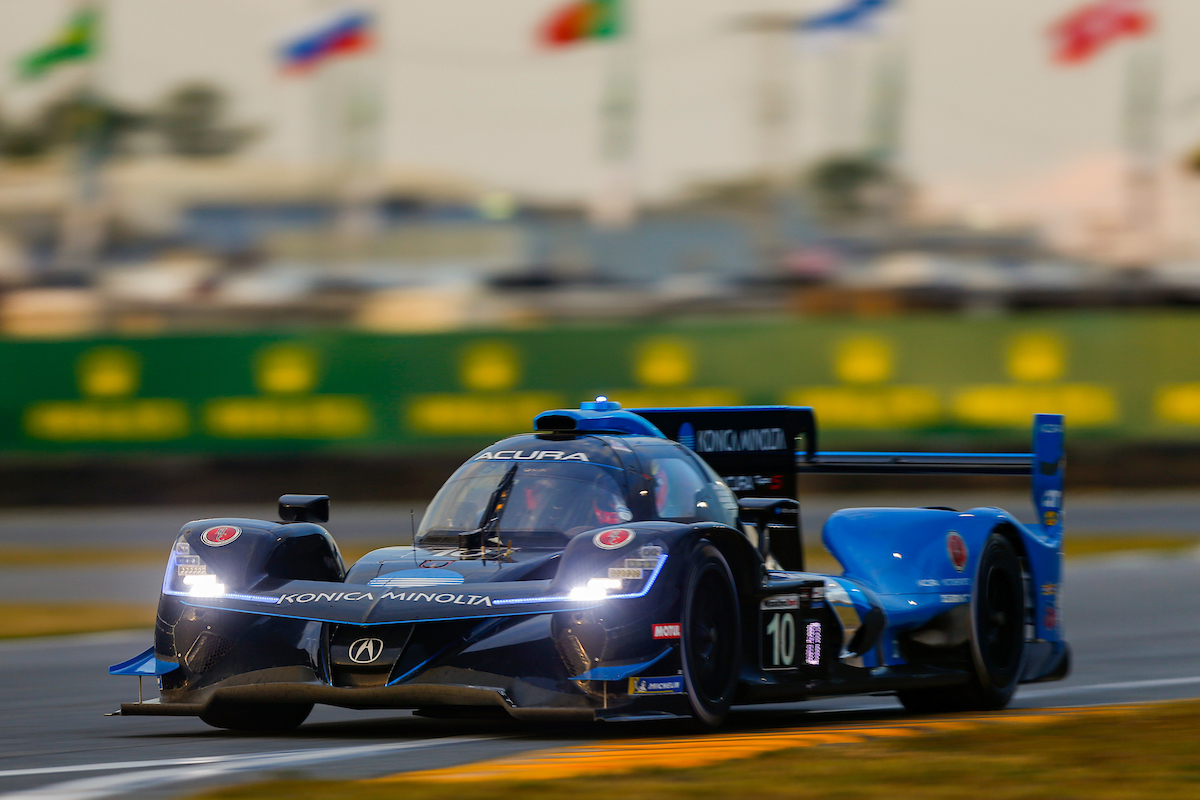 Wayne Taylor’s youngest son, Jordan Taylor, lead a Corvette one-two in the No. 3 Corvette C8.R in the GT Le Mans (GTLM) class, edging the No. 4 Corvette C8.R sister car by just 3.5 seconds. Co-driving with Taylor were Antonio Garcia and Nicky Catsburg. Garcia isn’t seen in any of the post-race photographs because, during the race, he tested positive for the coronavirus and was quarantined. The No. 24 BMW Team RLL BMW M8 GTE, co-owned by former late show host David Letterman, Bobby Rahal and Michael Lanigan, finished third. 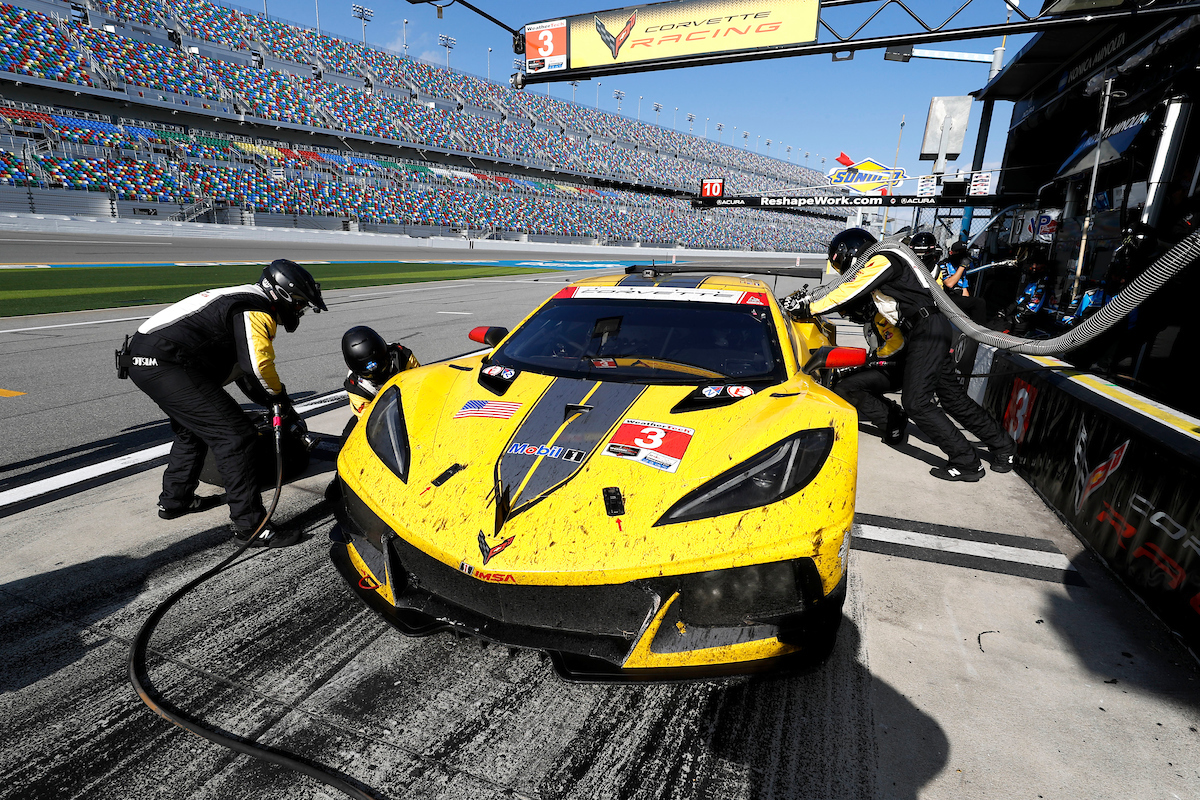 Jordan Taylor has now won three Rolex Daytona watches. “It was a great event for Corvette Racing. The first endurance win for the new C8.R after our championship last year,” said Taylor after the race. “A great way to start the season. 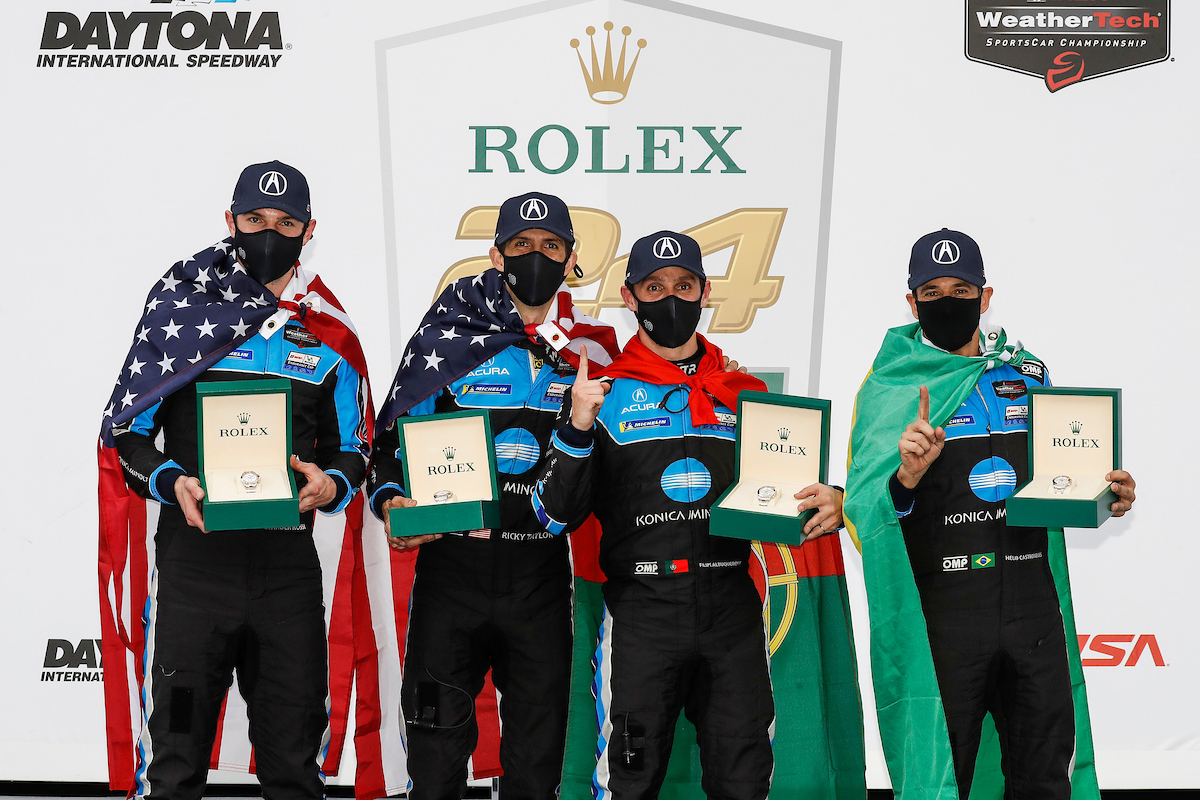 In the GT Daytona (GTD) class, Mercedes-AMG took the top two spots with the No. 57 Winward Racing Mercedes-AMG GT3 ahead of the No. 75 Sun Energy 1 Mercedes-AMG by a 16 second margin. The final step of the podium went to the defending GTD winning No.1 Paul Miller Racing Lamborghini Huracán GT3.

The Le Mans Prototype 2 (LMP2) class win went to No. 18 Era Motorsports ORECA LMP2 07 and the Le Mans Prototype 3 (LMP3) class debut win went to the No. 74 Riley Motorsports Ligier JS P320.
This race marks the thirtieth year that Rolex has been the title sponsor of the 24 hour race. Each of the five class winning drivers receive a much coveted Rolex Oyster Perpetual Cosmograph Daytona watch. Rolex became title sponsor of the 24 Hours of Daytona in 1992, since then it has been referred to as the Rolex 24 At Daytona. 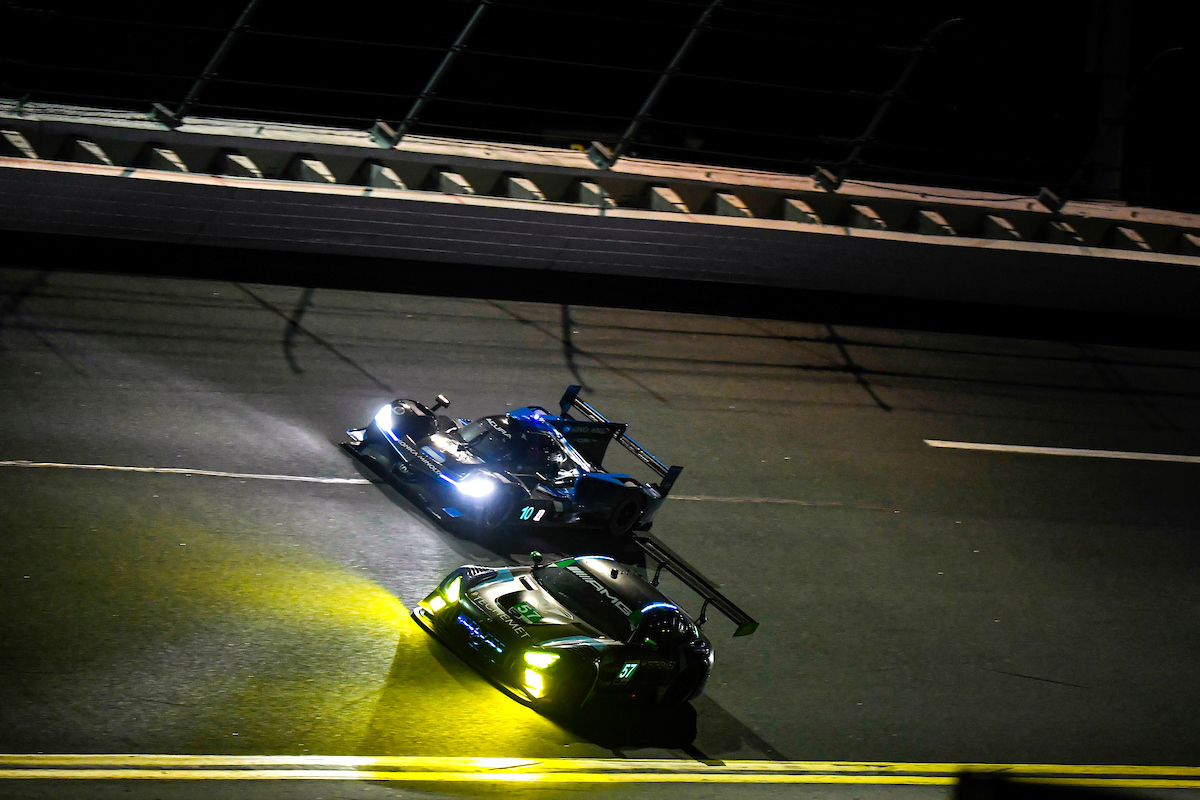 The complete results can be found here.

Up next for the IMSA championship is the second most prestigious endurance race in North America, the 69th running of the 12 Hours of Sebring. The 2021 Mobil 1 Twelve Hours of Sebring Presented by Advance Auto Parts starts at 10:30am EST on March 20 at the Sebring International Raceway in Sebring, Florida.