We have taken delivery of our latest long term test car, a 2018 Alfa Romeo Giulia Ti Sport in Misano Blue Metallic. We thoroughly enjoyed our time with our previous long term test car, a 2017 Volkswagen Golf GTI DSG Autobahn edition. We logged about 18,000 kms on our front-wheel drive GTI over eighteen months and appreciated its sportiness, versatility, practicality and high level of fit and finish. Our Giulia Ti Sport is equipped with the available Q4 permanent all-wheel drive, which will be a welcomed addition during upcoming fall, winter and spring driving months.

The Giulia has won countless awards since its introduction to the North American marketplace for the 2017 model year, including Motor Trend’s 2018 Car of the Year, Car and Driver’s Editors’ Choice list, and Car and Driver’s 2018 10Best list. The Giulia has even won Good Housekeeping’s Best New Luxury Compact Car Award for 2018. On the safety side of the ledger, in 2017 the Giulia was named the Insurance Institute for Highway Safety (IIHS) Top Safety Pick+, the highest possible rating in each of the five tests used by IIHS to evaluate crashworthiness.

One of the most famous automotive personalities in the world, Jeremy Clarkson, formerly co-host of the BBC television series Top Gear and now co-host of Amazon Prime’s The Grand Tour, once stated that ‘you can’t be a true petrolhead until you’ve owned an Alfa Romeo’. We are now owners of an Alfa and therefore, officially, petrolhead. 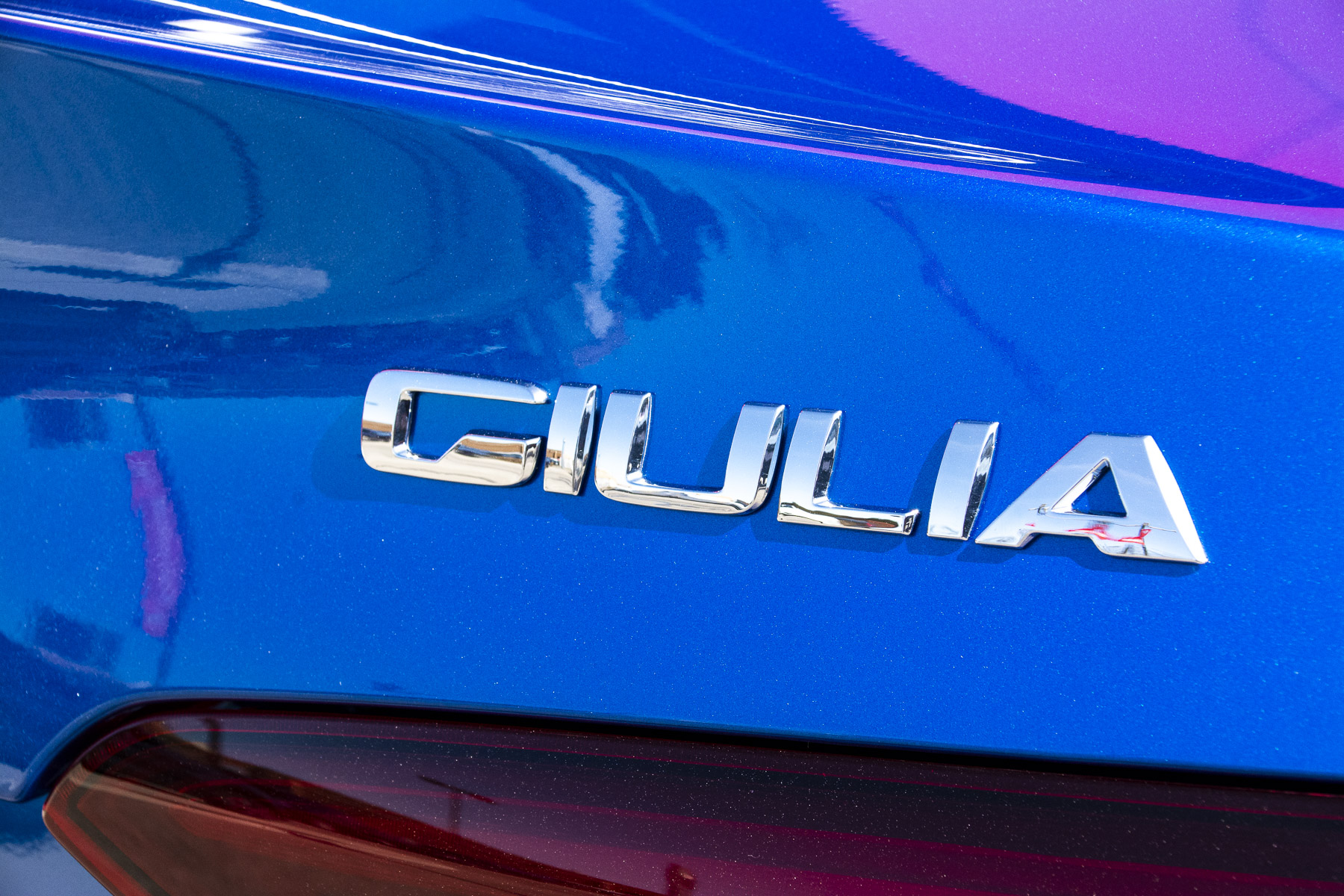 Anonima Lombarda Fabbrica Automobili (A.L.F.A.) was formed on June 24, 1910 in Milan, Italy. The ALFA logo is comprised of two Milan symbols, the municipality cross and the Visconti serpent. In 1915 Nicola Romeo took over the company and his surname was used to create the now famous Alfa Romeo brand. A golden laurel crown was added to the logo in 1925 to celebrate the company’s first World Championship title. The current incarnation of the Alfa Romeo badge was unveiled in 2015. 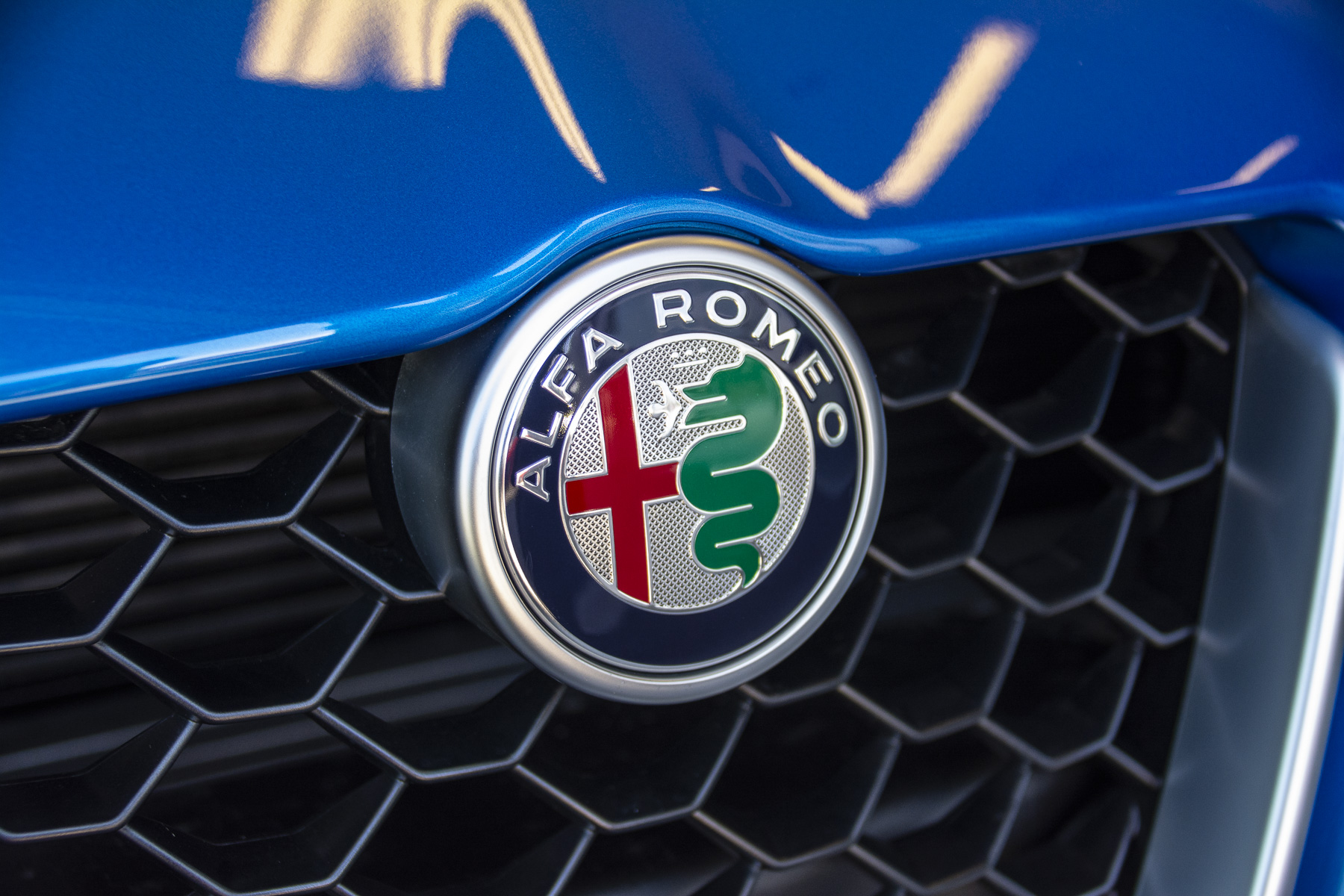 The 2017 Giulia began arriving on North American shores in the fall of 2016, which was the first time since 1995 that Alfa Romeo’s were officially marketed on this side of the pond. The Giulia is built on an all-new platform that embodies Alfa Romeo’s La meccanica delle emozioni, the mechanics of emotion.

The Giulia is available in six trim levels: the Giulia, Sport, Ti, Ti Sport and Ti Lusso, all of which have 280 horsepower. But the ultimate fire-breathing Giulia is the 505 horsepower Quadrifoglio, which comes with the famed four-leaf clover on the side of the car.

The Quadrifoglio badge has a lucky yet tragic racing heritage. As the story goes, Italian race car driver Ugo Sivocci was tired of his bad racing luck and lack of wins and decided to paint a lucky four-leaf clover on the side of his Alfa Romeo. He won several races in 1923, including the prestigious Targa Florio. Later that year, Sivocci was testing the new Alfa Romeo P1 race car, but the Quadrifoglio had not yet been painted on the car. Tragically, he crashed and lost his life. The four-leaf clover became Alfa’s good luck charm. 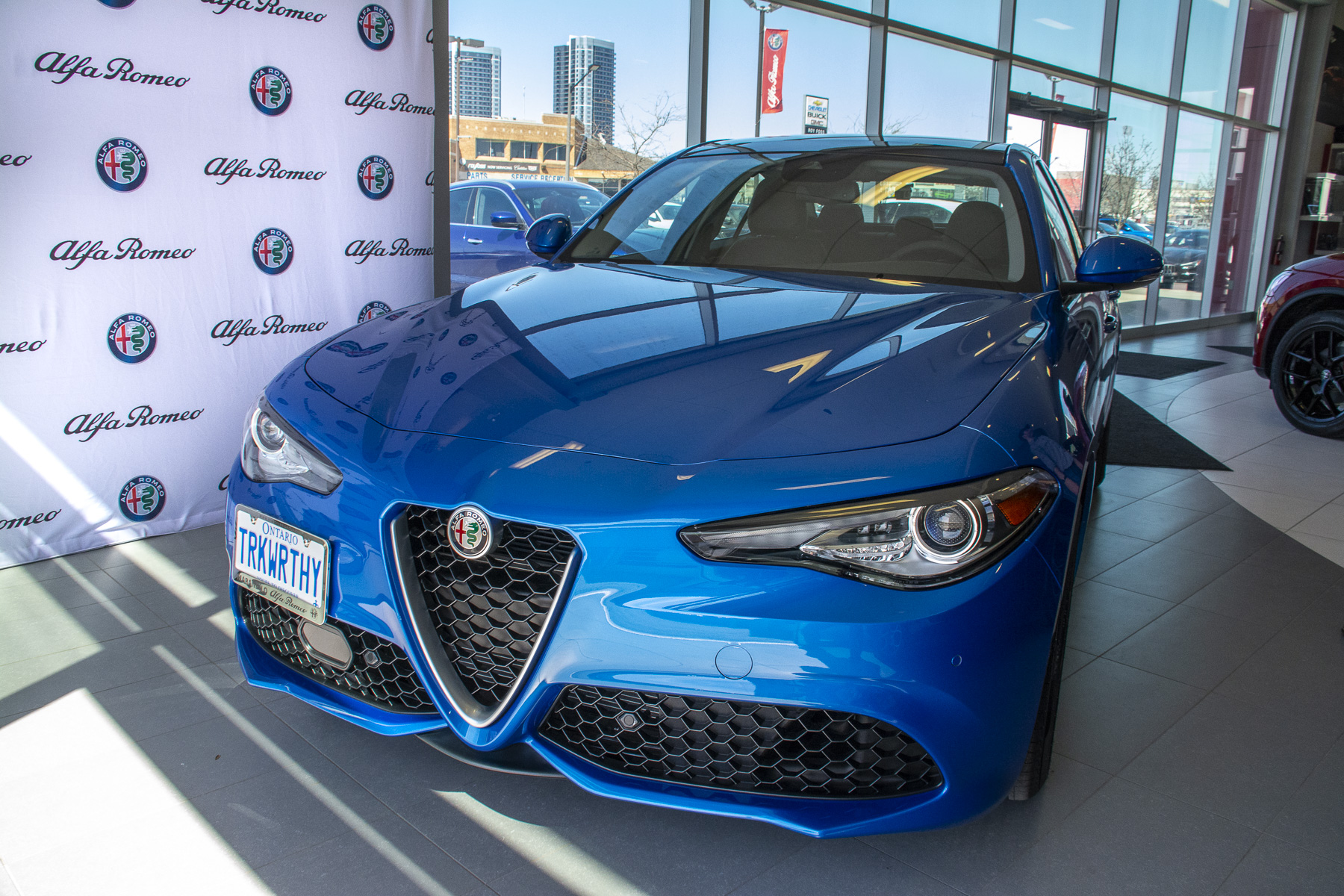 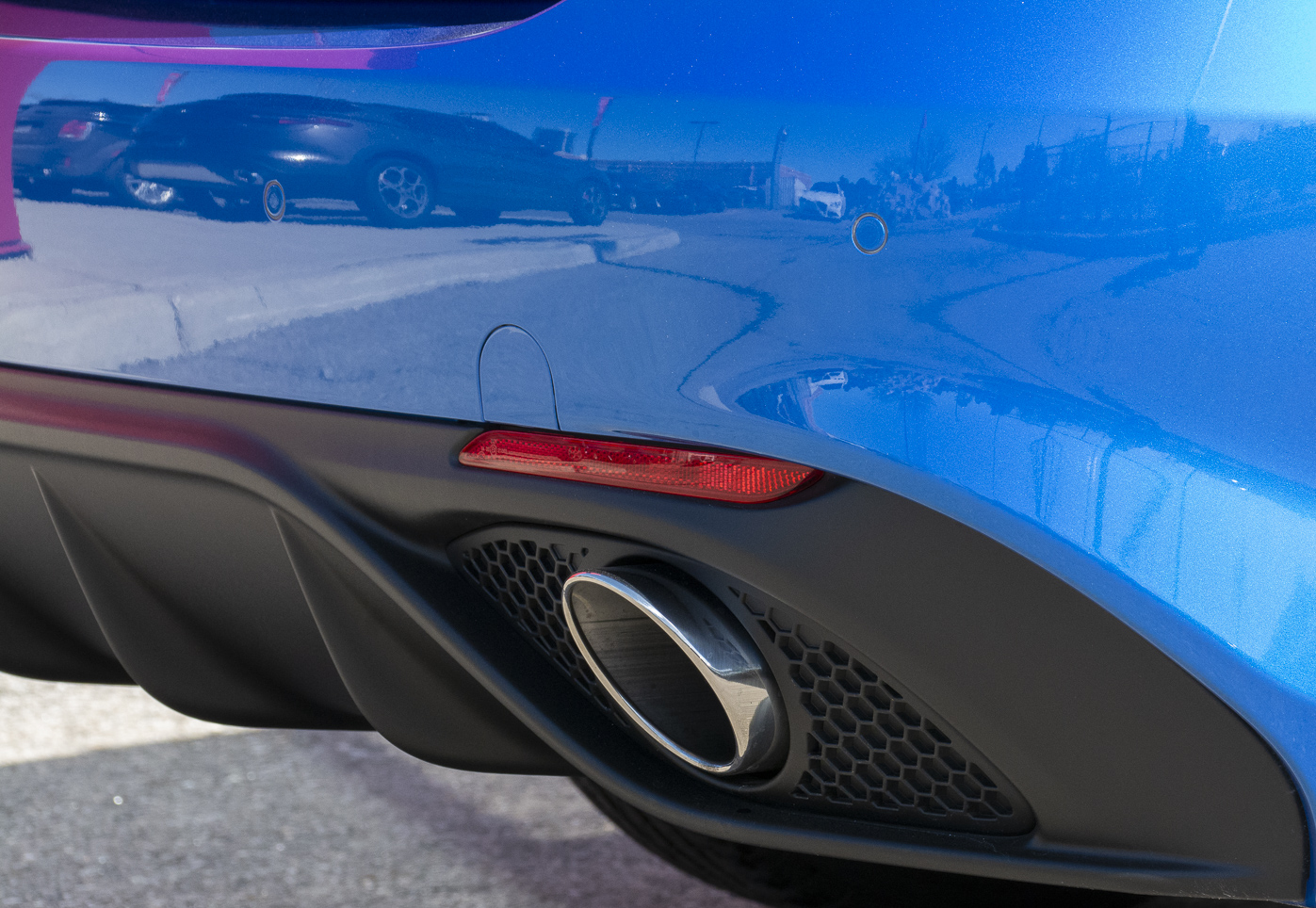 All of the Giulias, except for the Quadrifoglio, are equipped with an all-aluminum, 2.0-liter, direct-injection turbocharged engine, which generates 280 horsepower and 306 lb.-ft. of torque. Via the 8-speed transmission, the car will sprint from 0-60 mph/0-96 km/h in 5.1 seconds and has a top speed of 240 km/h or 149 mph. The Ferrari-derived 505 hp 2.9 litre twin turbo V6 in the Giulia Quadrifoglio is the most powerful engine Alfa Romeo has ever paced in one of their road going cars and can accelerate from 0-60 mph/0-96 km/h in 3.8 seconds. The Quadrifoglio set a Nürburgring record of 7:32, the fastest ever by a four-door production sedan and has a top speed of 307 km/h or 191 mph.a 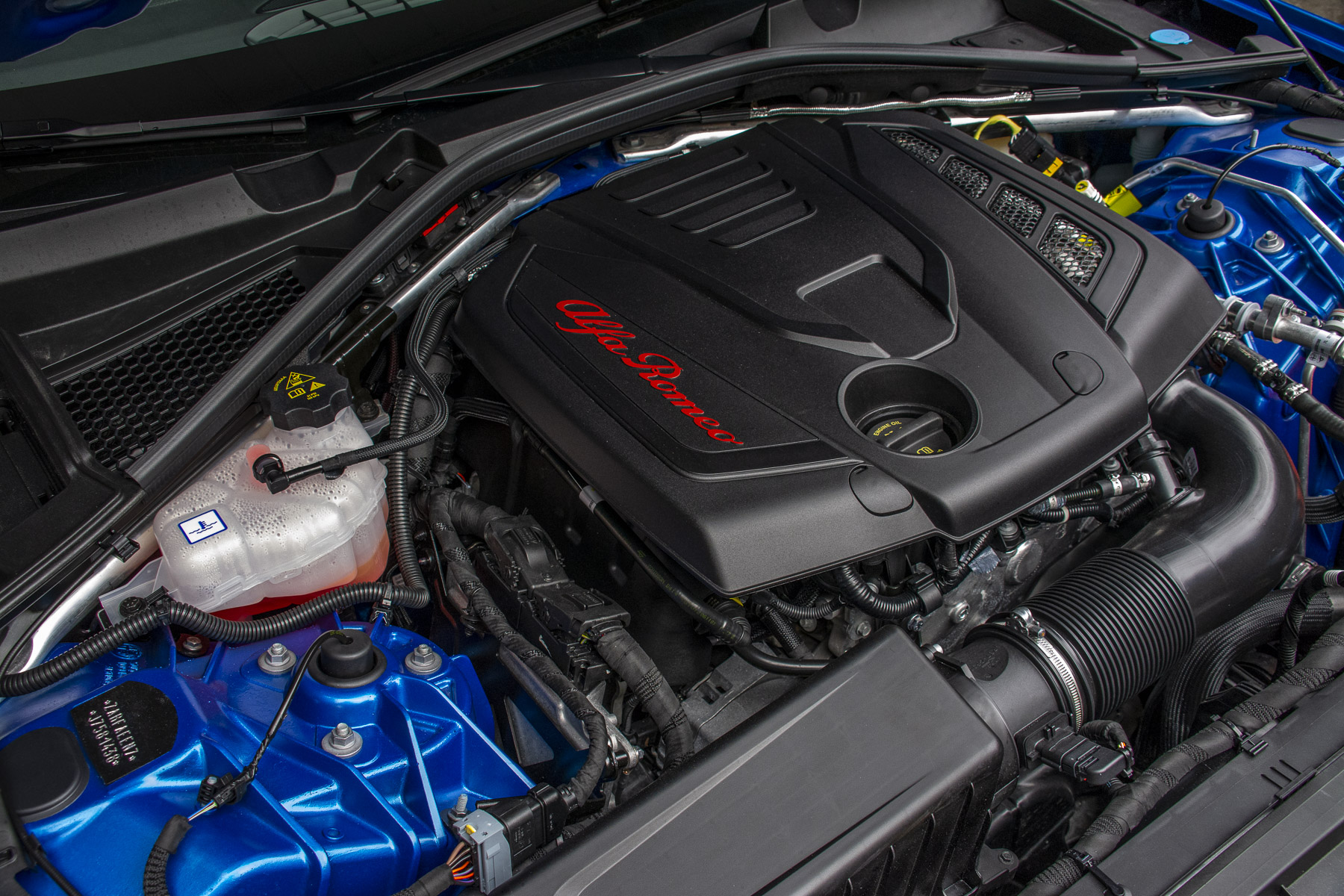 The Quadrifoglio is only available with rear-wheel drive. The Giulia and Ti models can be equipped with the Q4 all-wheel-drive system which can transfer up to 60% of its engine’s torque to the front axle for improved all-season traction and performance. All Giulia’s have an 8-speed automatic transmission, with available column-mounted aluminum paddle shifters, and can deliver gear changes in less than 100 milliseconds. 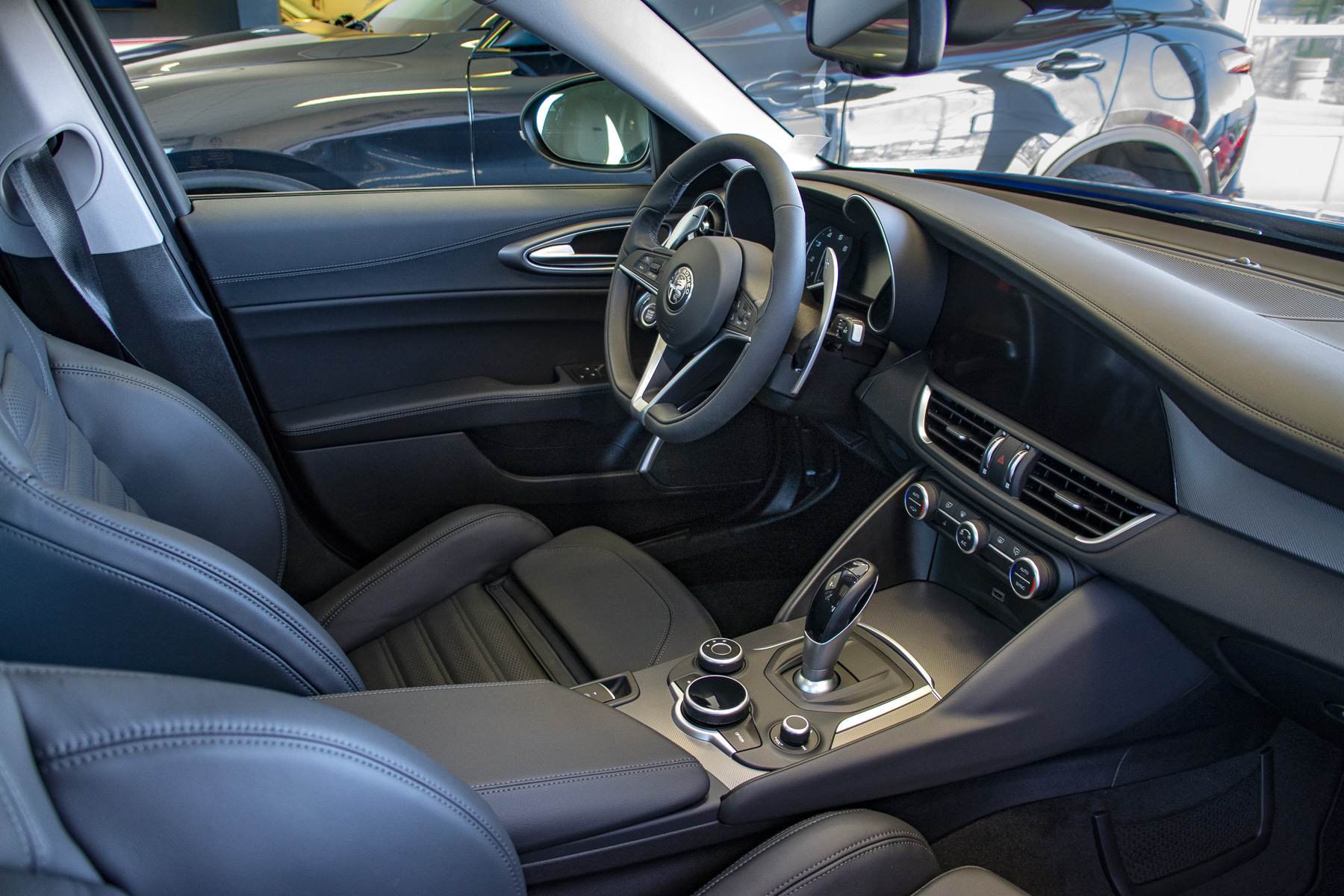 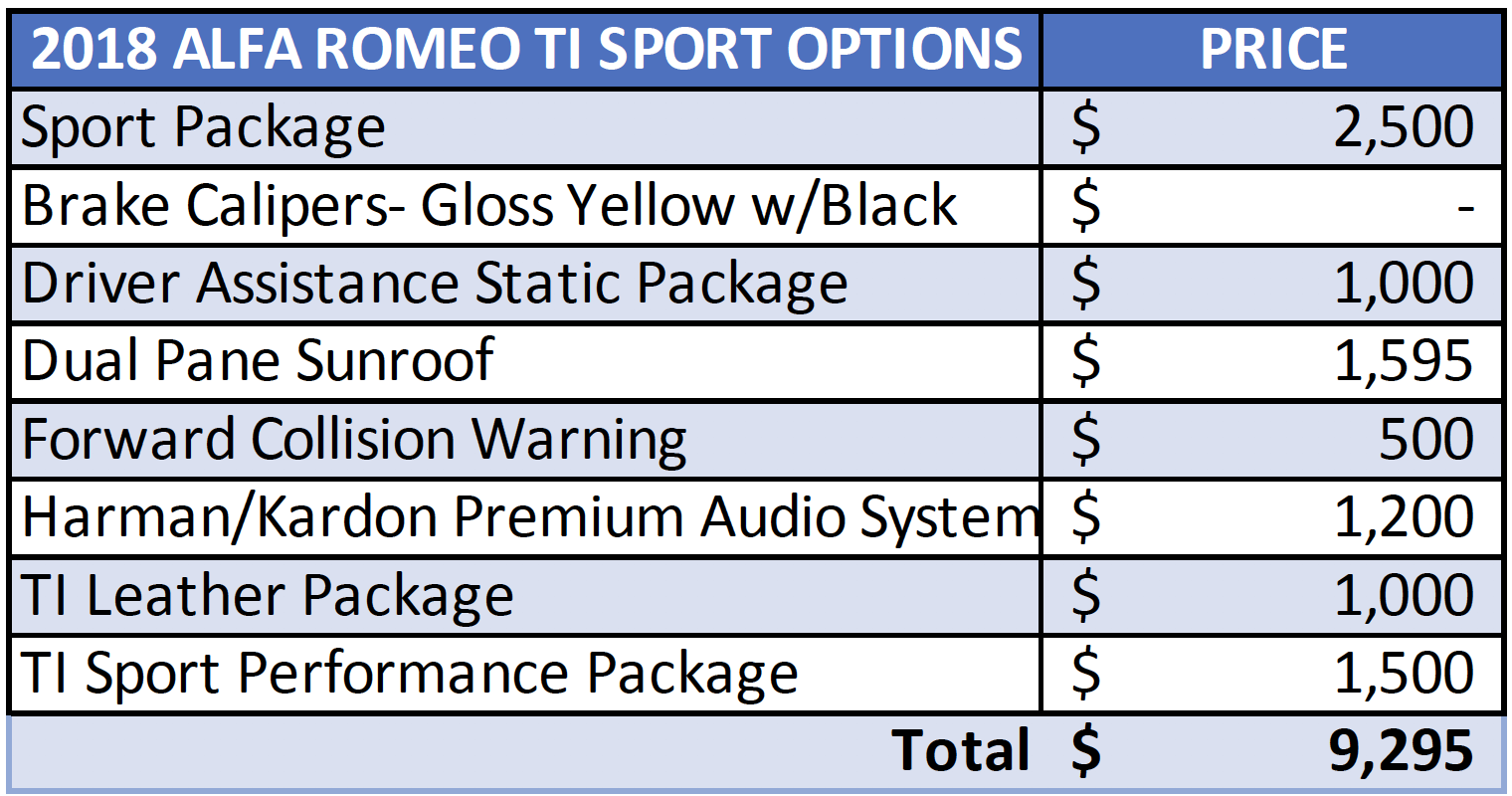 One of the added bonuses of taking delivery of our Giulia at Maranello Alfa Romeo in Vaughan, just north of Toronto, is that the dealership is part of the R. Ferri Automotive group. This new modern facility also includes Maserati of Ontario and Ferrari of Ontario, the first authorized Ferrari dealership in Canada. Touring the 90,000 square foot Ferrari and Maserati showrooms is extremely impressive and a must for any automotive enthusiast. It is rare to be able to see so many six-figure exotic supercars in one location, both new and older models. Remo Ferri, the President of R. Ferri Automotive, opened his first car dealership in 1976 and has now grown his dealership network to include 16 locations and 16 automotive brands. 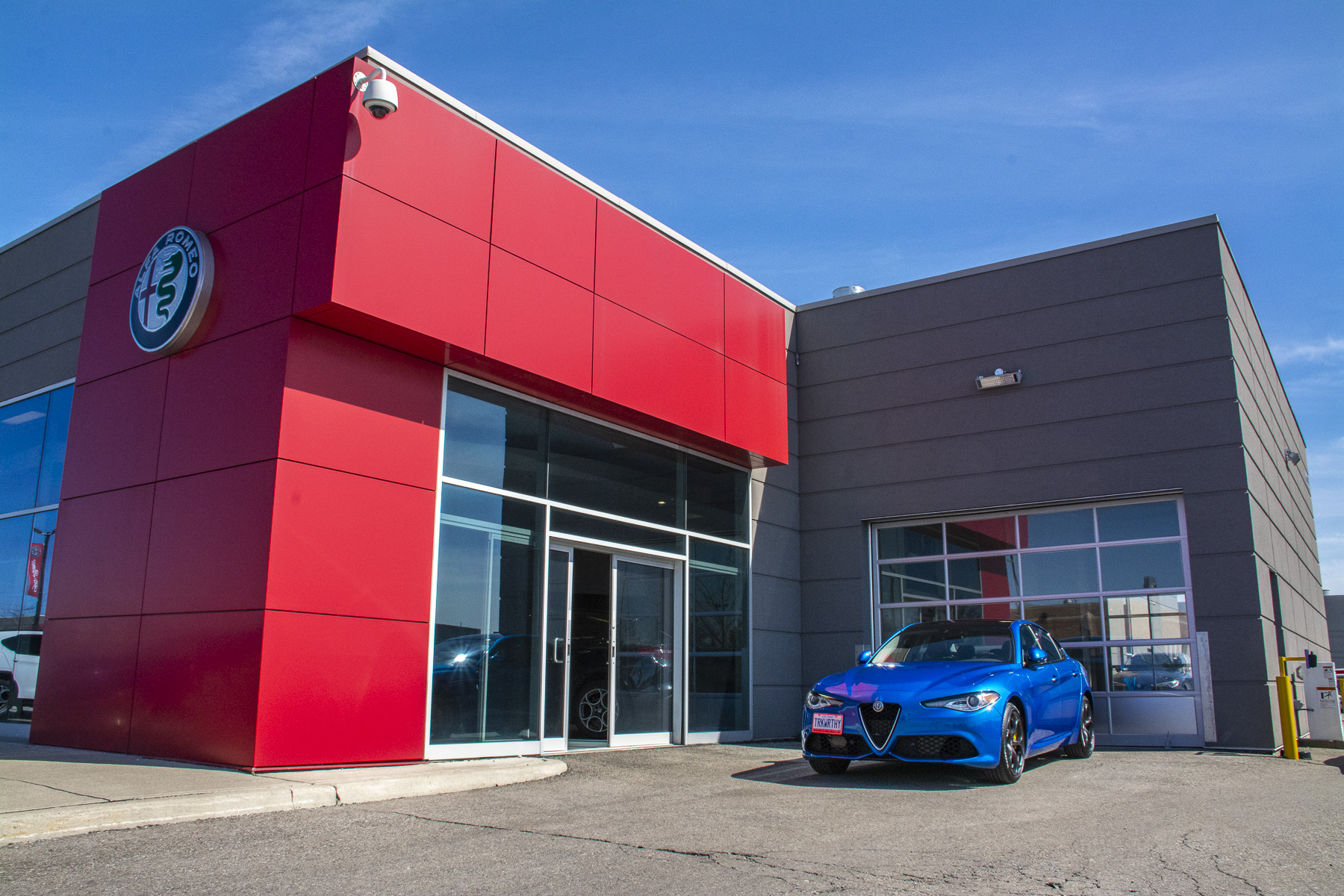 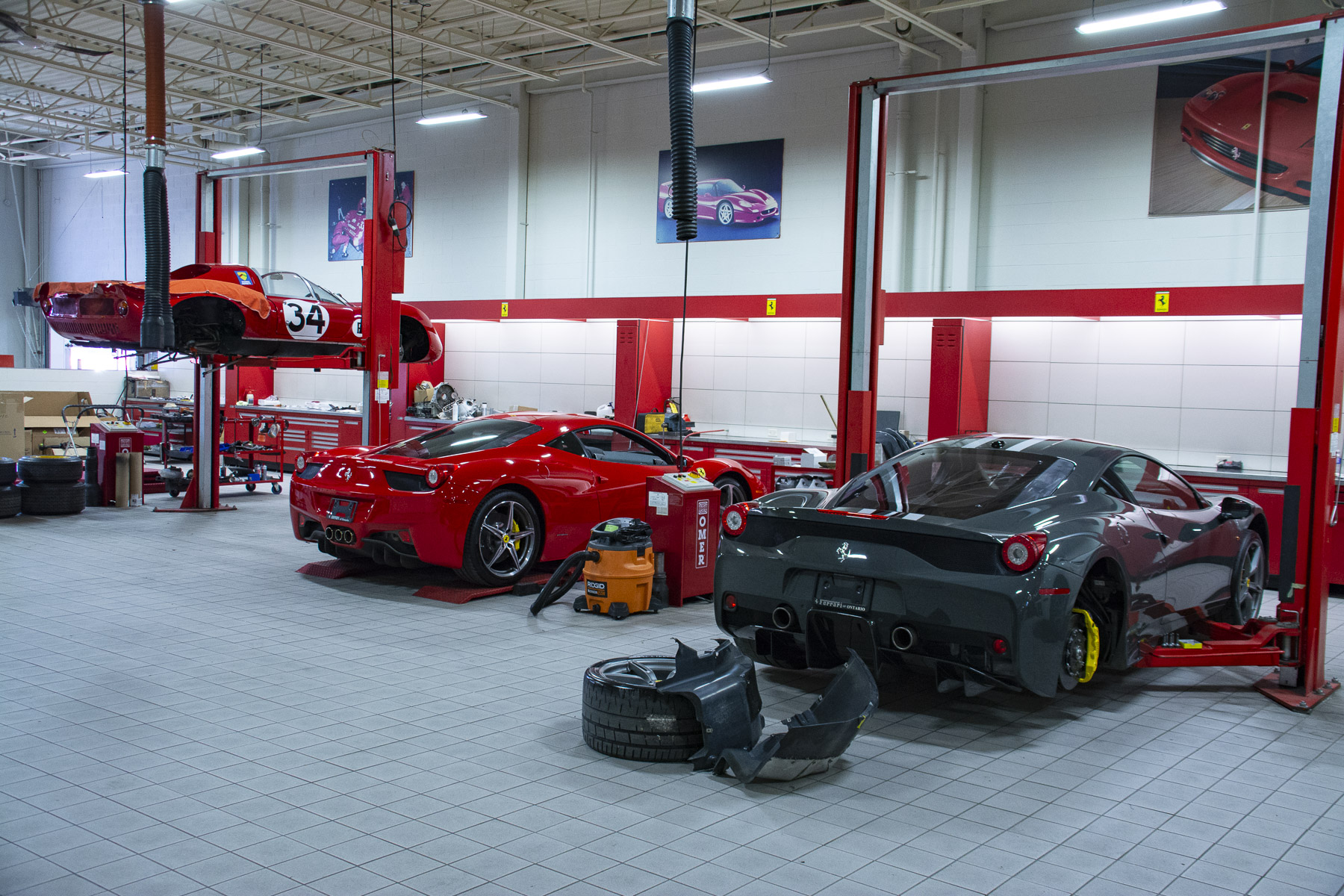 We will provide updates on how our all-wheel drive Giulia performs throughout the coming four seasons. We hope it delivers on its promise of la meccanica delle emozioni, the mechanics of emotion. 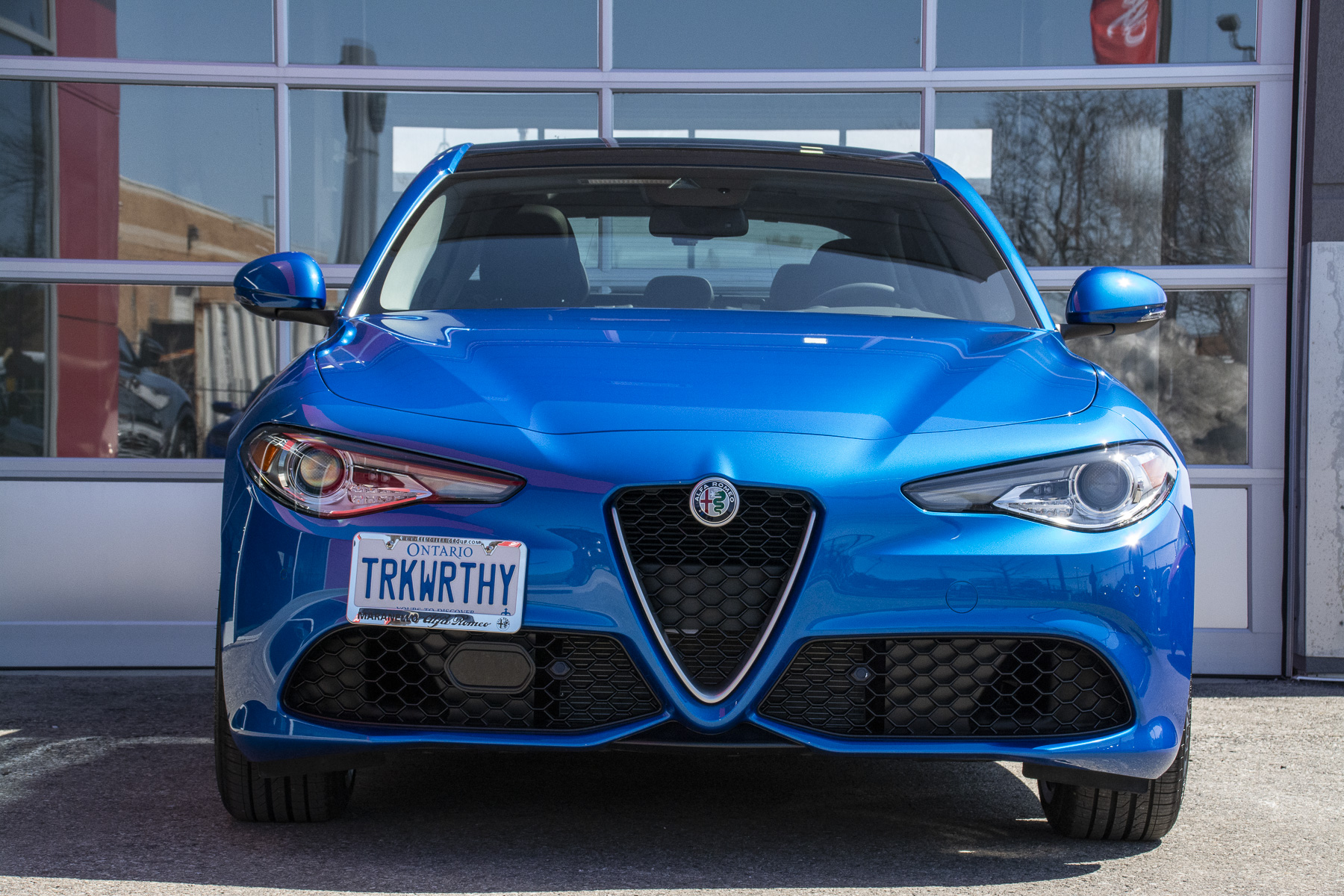