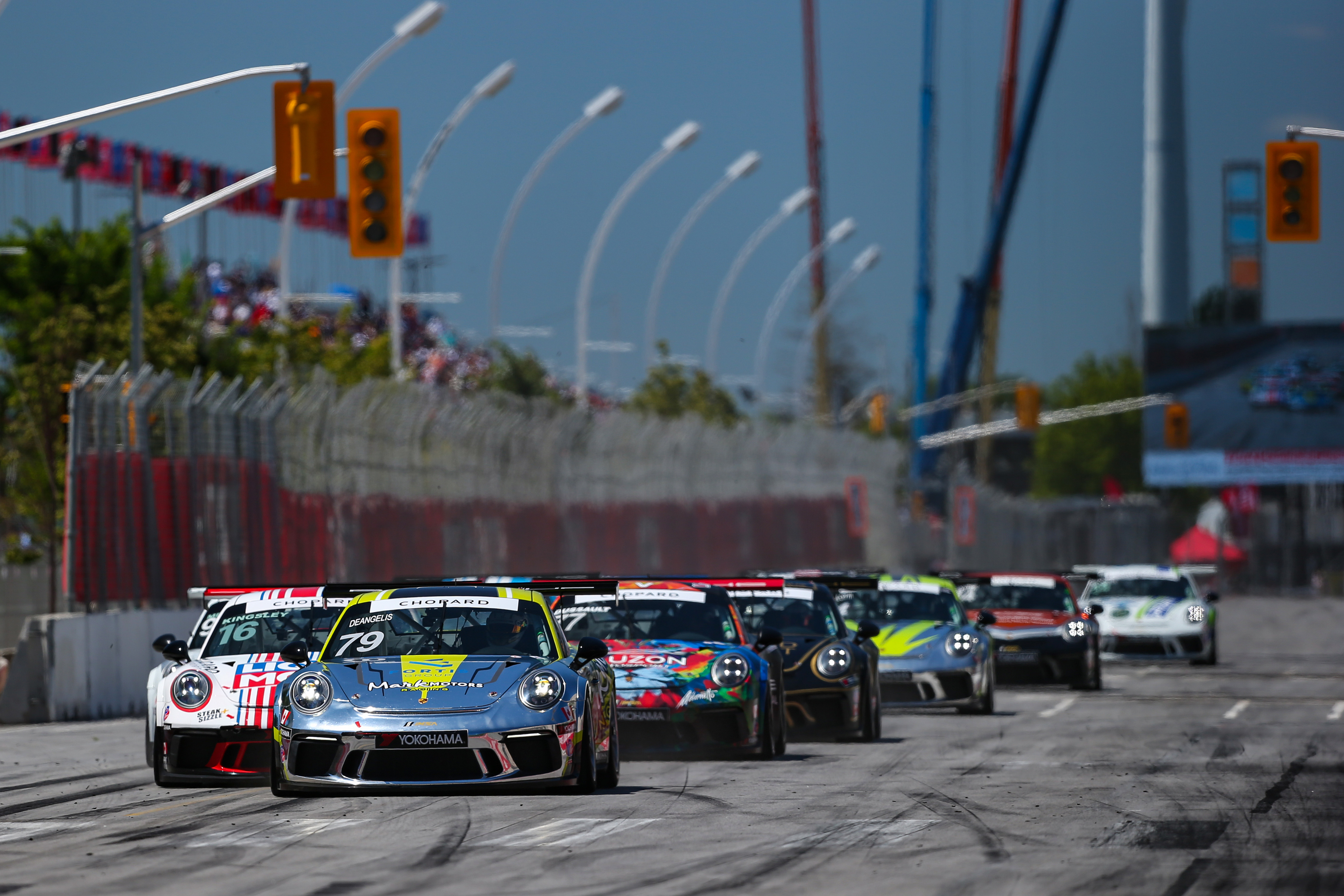 “Everybody’s in the exact same position so when we start the race everybody’s got the exact same chance of going out there and doing well.”Roman De Angelis, Toronto Porsche GT3 Cup Challenge Winner

Eighteen-year-old Roman De Angelis had a perfect race weekend. He won both races and started from pole position for the Saturday and Sunday Porsche GT3 Cup Challenge races held during the Honda Indy Toronto race weekend. De Angelis, from Belle River, Ontario, finished off the podium in the season opener at Canadian Tire Motorsport Park in May, but has won all seven races since then, including both races this weekend on the Streets of Toronto. 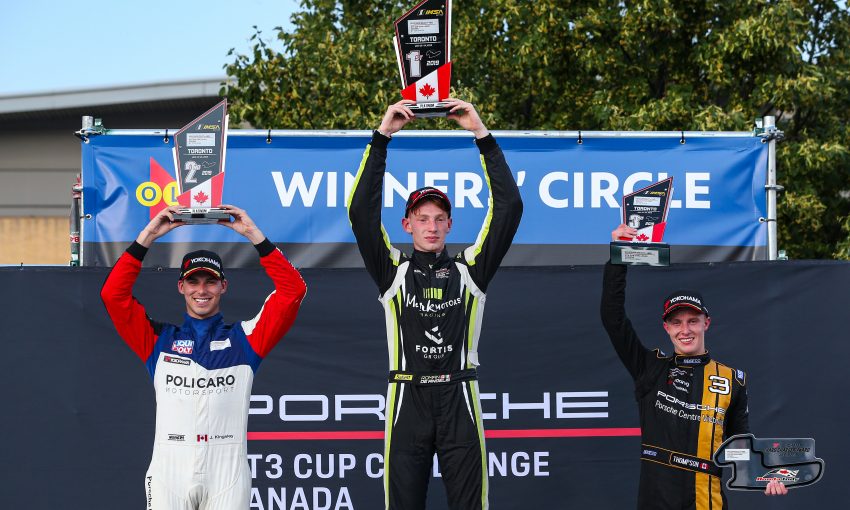 With 8 of the 12 races completed, Roman De Angelis leads the championship with 273 points followed by Parker Thompson (232), Jeff Kingsley (230), Patrick Dussault (220) and Marc Cirone (203) rounding out the top five. 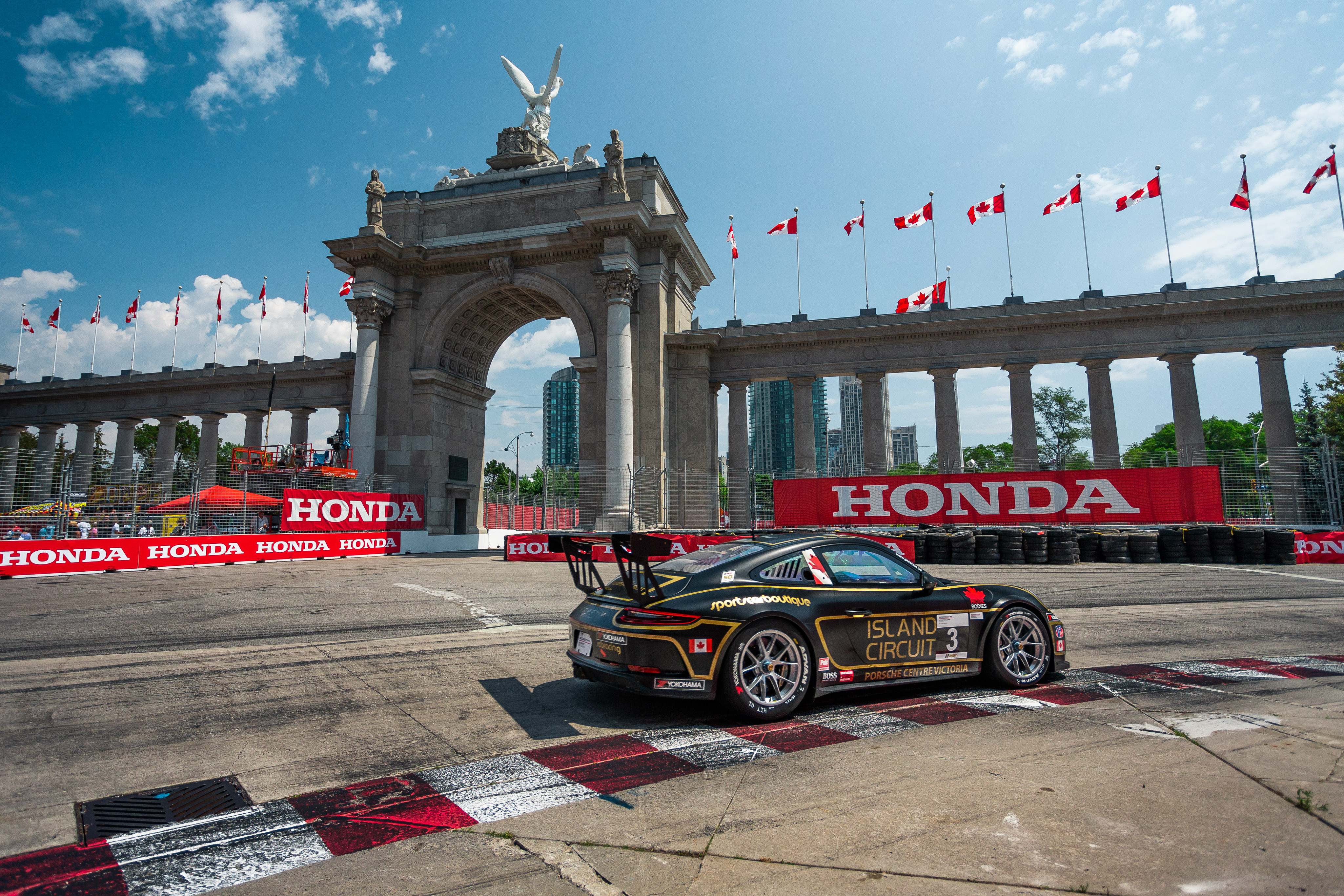 De Angelis’ finished second in the championship last season. In 2017 he was the Porsche GT3 Cup Challenge Canada Gold Class champion becoming the youngest driver ever to win in GT3 Cup history at just 16 years of age. 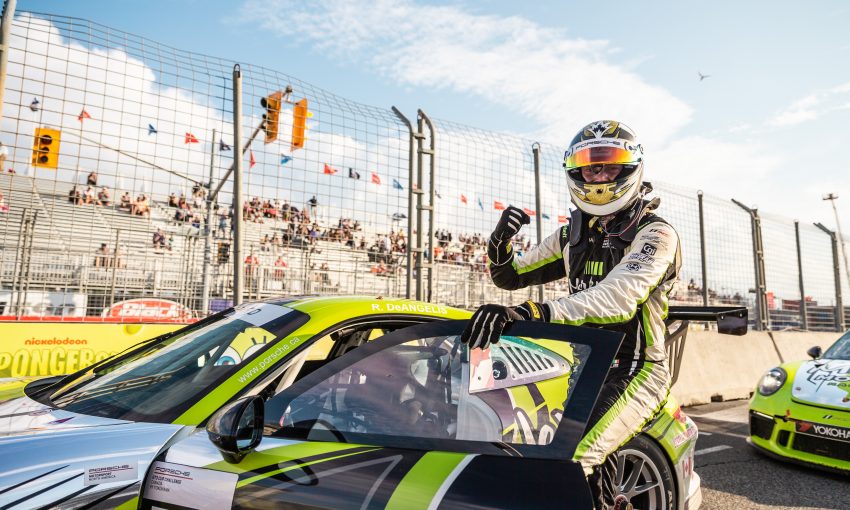 TrackWorthy: Congratulations on your perfect race weekend in Toronto.
De Angelis: It’s always good to win back-to-back races and Toronto’s such a cool event. If there’s one place that I’d want to do well it’s here, and big events like Montreal and Petit Le Mans at the end of the year. I’m able to check that off the list having swept Toronto.

TrackWorthy: What was it like coping with the two-hour rain delay for the Saturday race?
De Angelis: I’m pretty calm so it takes quite a bit to get me fired up. Everyone’s in the same boat. Everybody’s in the exact same position so when we start the race everybody’s got the exact same chance of going out there and doing well. It’s a factor that’s out of your control so as long as you are prepared and know what to expect, and just do the best you can, then there’s really nothing to be worried about or get amped up about. I just keep calm, go with the flow and see what happens until we’re told to get in the car, which is the right state of mind for me. 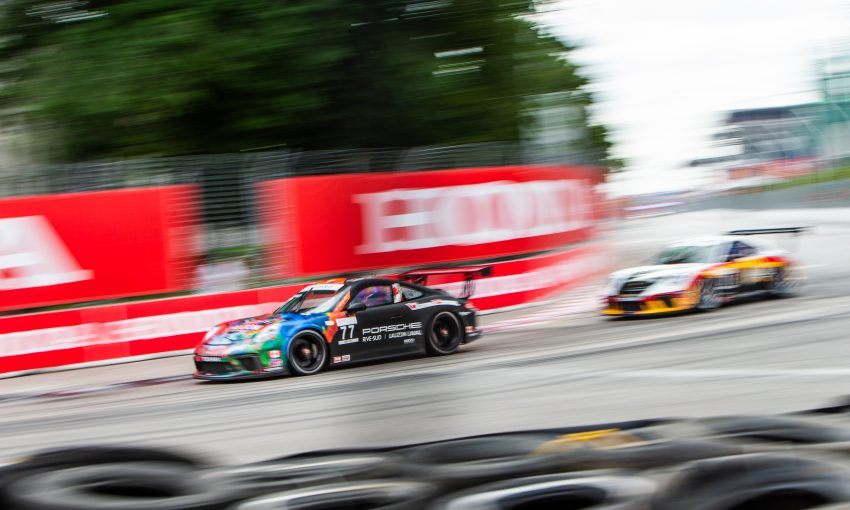 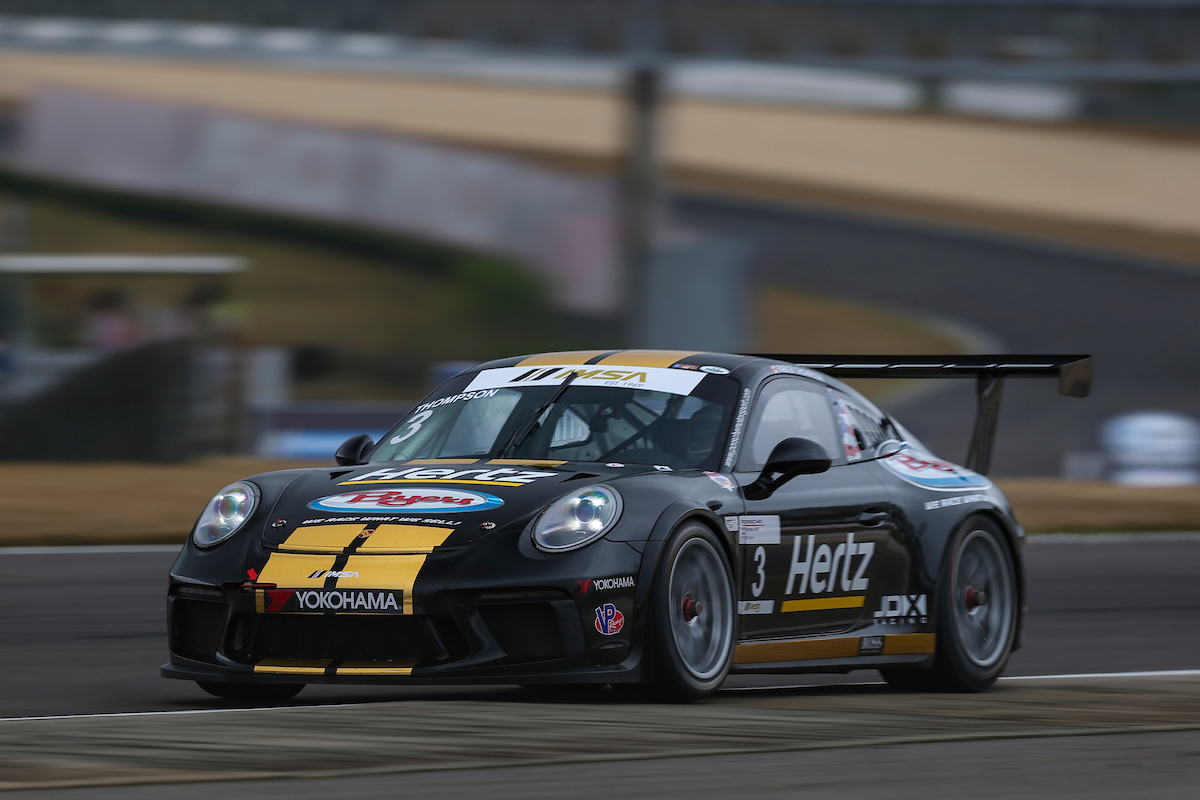 TrackWorthy: You were the runner up last season and you’re leading the championship now, you must be pleased with your team and yourself?
De Angelis: I’ve been with Mark Motors for three years and I have a really good relationship with everybody there. Last year there was a bit of disappointment on a few occasions because I didn’t think I performed to my best ability. I had Zach Robichon as my team mate, who is arguably one of the best Cup drivers around. I think we were the only team to beat him last year. It was good for me to have somebody like that to compete with because he not only put into perspective where the top drivers are but it also gave me somebody to gage myself against because he was my team mate. I was able to progress as a driver between last year and this year. 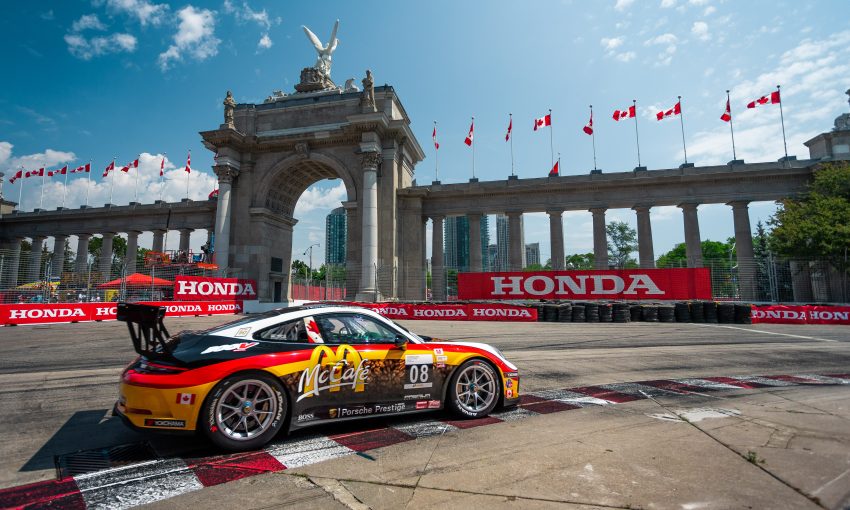 TrackWorthy: What are your hopes for the coming seasons?
De Angelis: I’m really hoping I can get a ride in WeatherTech (SportsCar Championship). I’ve always been a huge fan of endurance racing. I got to do (the Rolex 24 at) Daytona this year. That made me even more anxious to do that so I’m trying to perform to the best of my ability. If I can get any opportunities, but with the politics the way it is, it’s really hard to get a ride, no matter how good you are, I’m just trying to do everything on myside that I can and whatever happens, happens.

TrackWorthy: What was it like racing for the first time in the biggest Endurance race in North America, the Rolex 24 at Daytona?
De Angelis: I was with Audi Sport Canada in an R8 GTD which was awesome! I got into the car as the sun was setting and drove into the night. My team mate got in and drove while they do the fireworks show, then I got back in the car from 10:30pm until 1:00 in the morning and I probably had one of the best experiences I’ve ever had in a race car. We finished 3rd but we were leading with 20 minutes left, we pitted to go to the end (of the race) but then they red flagged it. 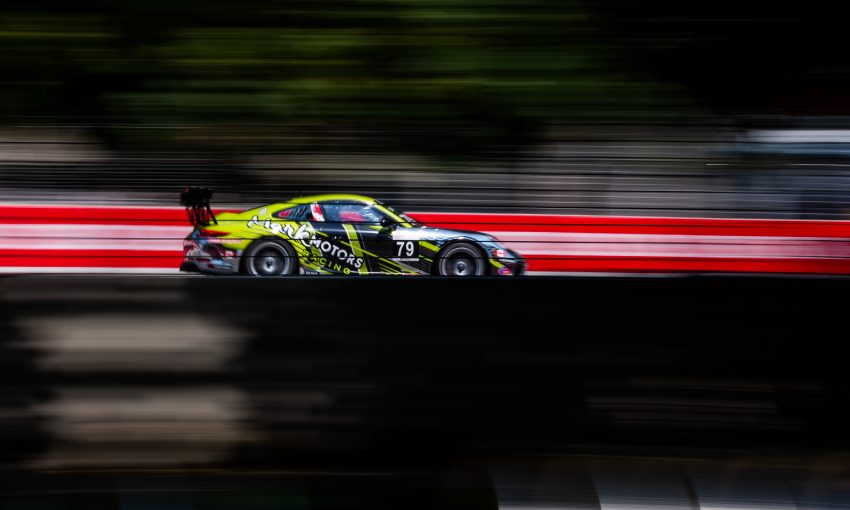 TrackWorthy: How are the final two race weekends shaping up for you?
De Angelis: Mont-Tremblant is probably one of my top three favorite tracks. Road America is farther down the list I’d say but it’s still a track I don’t mind driving. The racing is always good there and I’m sure it will be as competitive as always so looking forward to the 40 car field like we had in Montreal.

There are four races remaining with two races at Road America in Elkhart Lake, Wisconsin, August 3 and 4 and two races at Circuit Mont-Tremblant, near Montreal, Quebec, September 28 and 29. Full race results and series details can be found at IMSA.com. 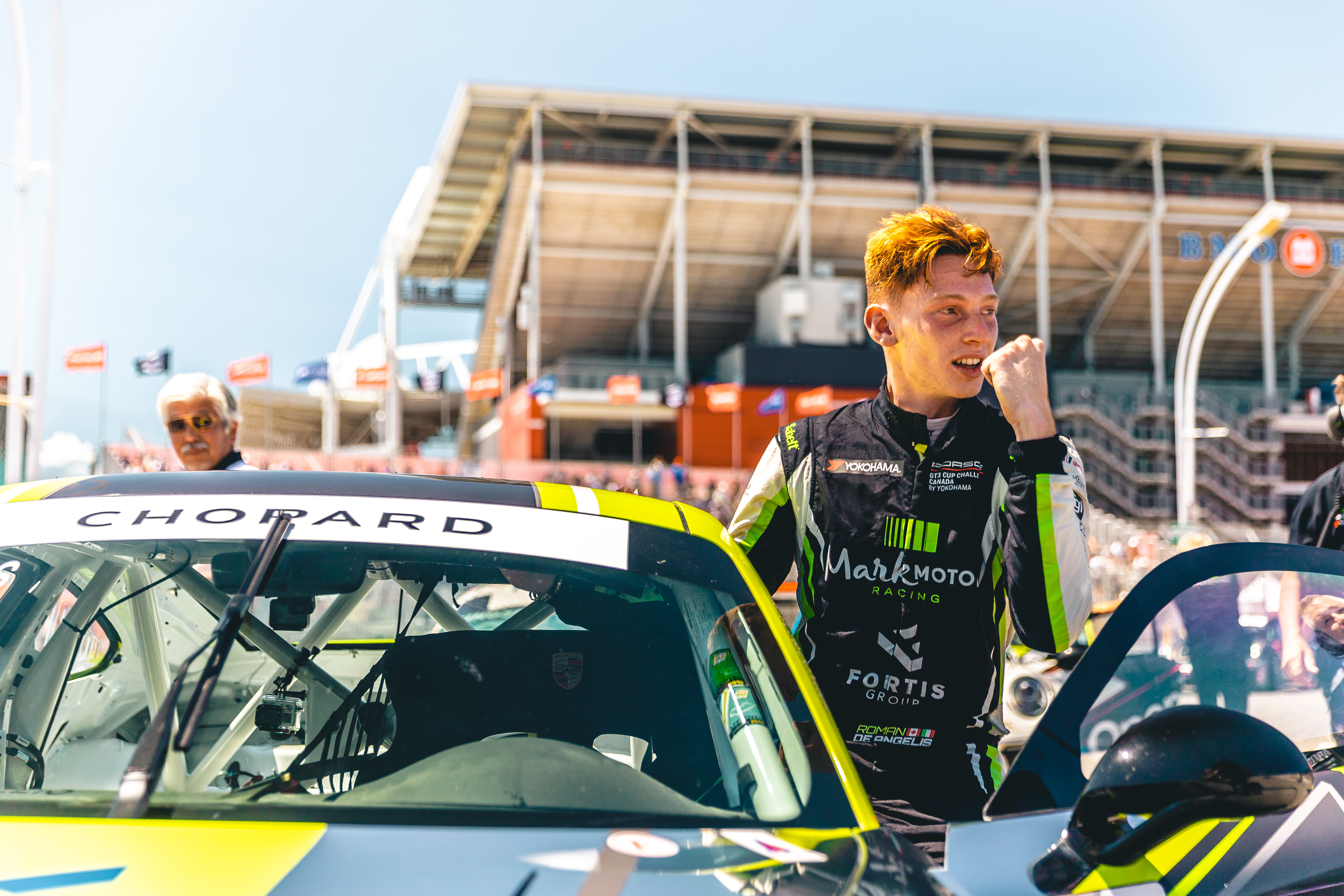